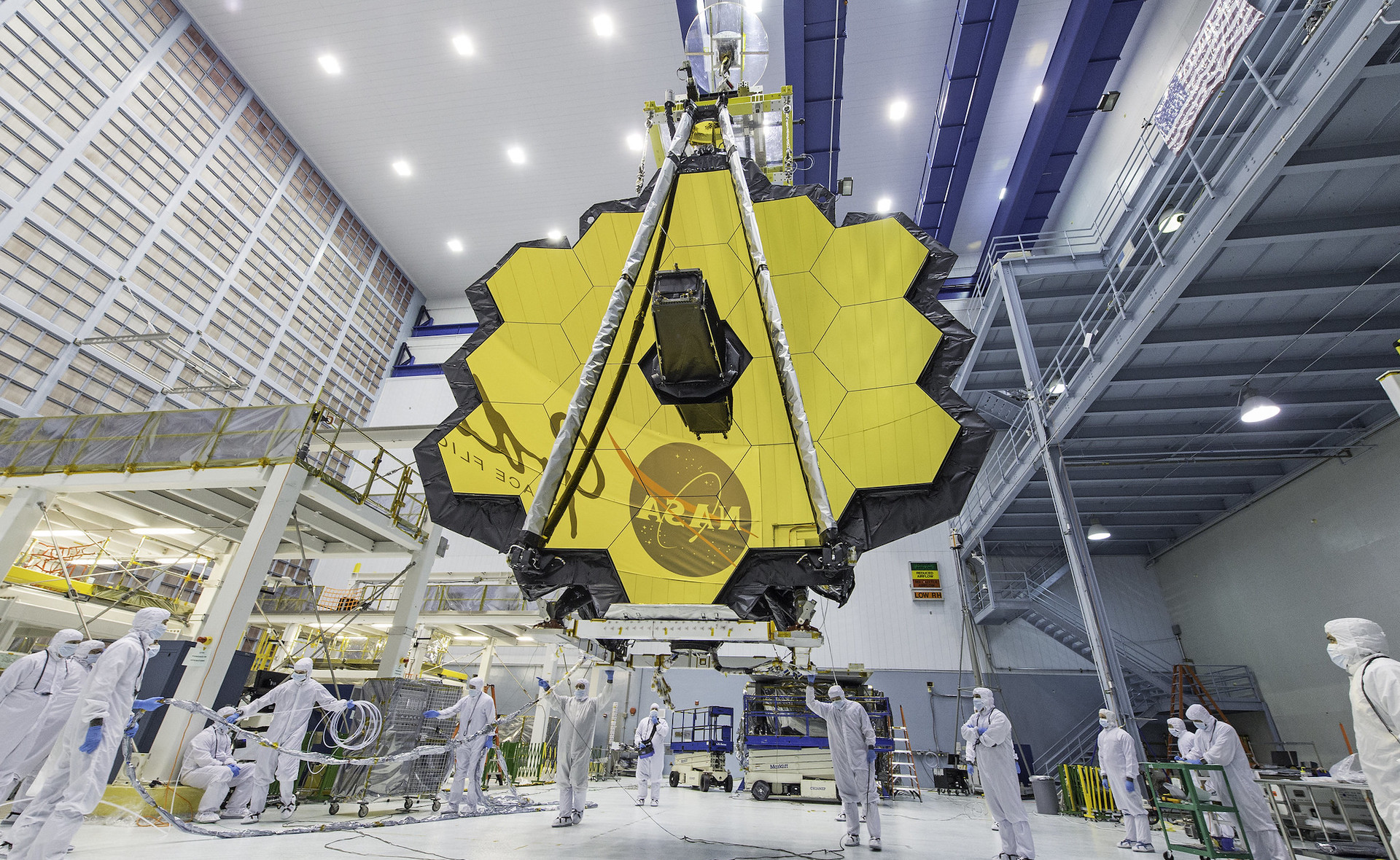 If all goes well, Hubble’s effective replacement, the James Webb Space Telescope, will launch from French Guiana before the end of the year.

Last week, the James Webb Space Telescope (normally called the JWST, though there is a movement to just give it the nickname Webb) finally completed the last stage of its comprehensive testing program at Northrop Grumman’s facilities in Florida. Not wanting a repeat of Hubble’s famous failure three decades ago — the telescope launched with blurred vision that had to be fixed with subsequent Shuttle missions — the tests have been longer and more involved than ever. The JWST has to work perfectly once it is in orbit as NASA doesn’t have the capabilities to fix it once it’s up there anymore.

In fact, it never would have done. The Shuttle was a ‘mere’ orbital vehicle and the JWST is destined for a solar orbital position at the L2 point 1.5 million km away, roughly four times further out than the Moon (technically the JSWT will orbit around L2). That means it can use its sun shield to block heat and light from the Sun, the Earth, and the Moon all in one go as they are all in the same approximate line. And, unlike Hubble which ducked in and out of the Earth’s shadow every 90 minutes, Webb will have an uninterrupted view of the cosmos for 24/7 operation.

Webb is an orbiting infrared observatory that boasts longer wavelength coverage and greatly improved sensitivity over Hubble (which, as we pointed out  few months ago, is effectively 40-year old technology). These longer wavelengths effectively enable Webb to look much closer towards the beginning of time and to hunt for the as yet unobserved formation of the first galaxies following the Big Bang. It also allows it to look inside dust clouds where stars and planetary systems are forming today and, of course, will greatly improve our ability to seek out and gather information regarding exoplanets. 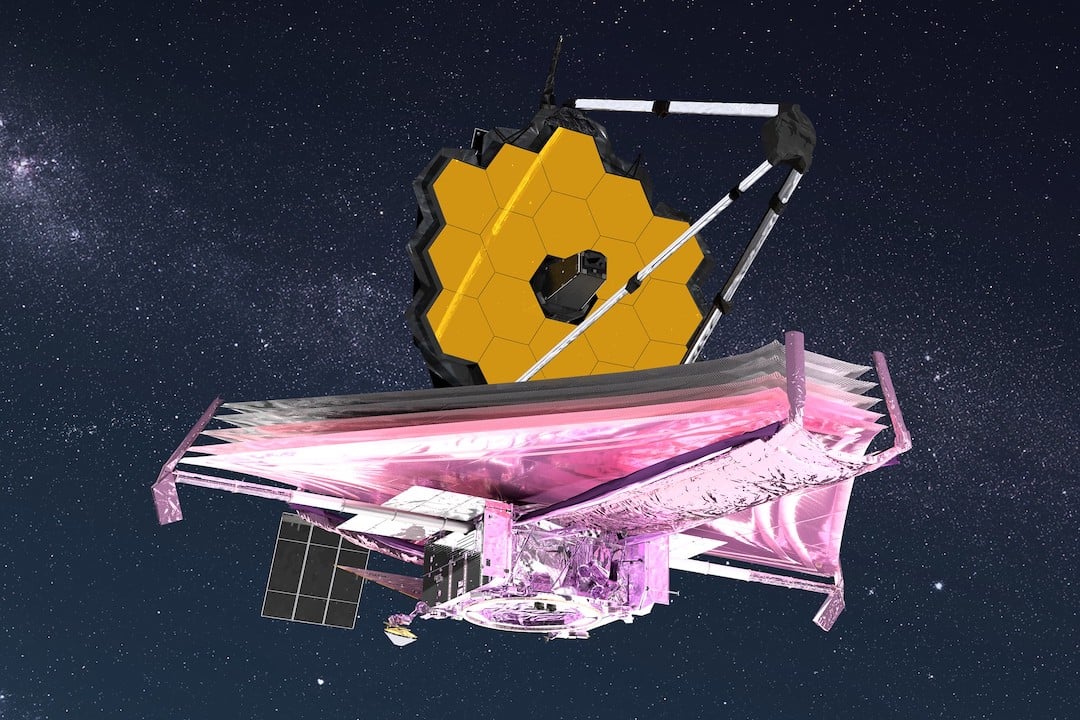 Webb’s primary mirror is a massive 6.5 metres across (21 feet 4 inches), a huge leap up from Hubble’s 2.4 metre surface, all of which contributes massively to the new telescope being billed as 100x more powerful than Hubble. New lightweight optics have been used to construct it, with each of the 18 hexagonal-shaped components that will unfold at the L2 point to produce the final mirror weighing only 20kg, one tenth the mass of Hubble’s mirror per unit area. In fact, if you scaled up Hubble’s mirror to Webb’s dimensions, it would be too heavy to make it into orbit.

Webb’s primary imager is the Near Infrared Camera (NIRCam), which will cover the infrared wavelength range 0.6 to 5 microns, and is based around ten mercury-cadmium-telluride (HgCdTe) detector arrays, which NASA says are roughly analogous to CCDs. It is equipped with chronographs which effectively let Webb hold a ‘hand' up to block out the light from a bright object so they can see things close to it (such as the aforementioned exoplanets).

This is joined by the Near InfraRed Spectrograph (NIRSpec) which will enable Webb to analyse the spectrum of an object and extrapolate its physical properties, including temperature, mass, and chemical composition.

A Mid-Infrared Instrument (MIRI) features both a camera and a spectrograph operating in the wavelength range of 5 to 28 microns. The expectation is that MIRI's camera (based on three Arsenic-doped Silicon detector arrays) will provide exactly the sort of wide-field, broadband imaging astrophotography that made Hubble’s reputation.

And finally the major instrument package is rounded out by the Fine Guidance Sensor and Near Infrared Imager and Slitless Spectrograph (FGS/NIRISS), which will allow Webb to point precisely, as well as investigate ‘first light’ detection and much to do with exoplanets in the wavelength range of 0.8 to 5.0 microns.

Given Webb’s complexity, it’s no surprise to find out that it’s late making it to the launchpad. Its original launch date was planned for October 2018, but that has slipped repeatedly since, with NASA citing the over-all size and complexity of Webb as the main issue, as well as wanting to take extra care over its sunshield and getting to the root cause of some strange readings during vibration testing back at the tail end of 2017.

Shipping prep will be completed by the end of September after which the 6200kg instrument will begin its journey by sea through the Panama Canal and on to its launch location in Kourou, French Guiana, on the northeastern coast of South America. There will  then follow another round of checks to makes sure it survived the journey unscathed — all in all launch processing will take around two months — before it is finally loaded on to a European Space Agency Ariane 5 rocket for the most dangerous part of the journey, the 26-minute ride into orbit.

Quite when that launch date will be is still hanging in the balance. Halloween, October 31, has been mooted in the past, but recent rumblings peg that back to November or even December thanks to a range of issues, including Covid.

From there, all being well, it will take another month to fly to its eventual orbital position at L2, slowly unfolding as it goes. As the sunshield is deployed and it begins to cool down to its operating temperature of 50K (-230C, -370F), so the instruments will all slowly be brought online with the first observations scheduled for around six months after launch.

Deploying and unfurling along the way requires in the region of 50 major deployments and 178 major release mechanisms to all work perfectly, which is around the time you begin to be grateful that NASA has spent as long as it has in testing Webb.

After decades of planning it looks like we are finally getting there, but there is still a lot of uncertainty surrounding the mission despite the best efforts of what NASA details as “thousands of scientists, engineers, and other professionals from more than 14 countries and 29 states, in nine different time zones.”

In fact, at the moment there is probably only one sure thing about it, and that is its name is Webb not the JWST. Once you start writing about it, like its predecessor before it, it somehow develops a personality all of its own.