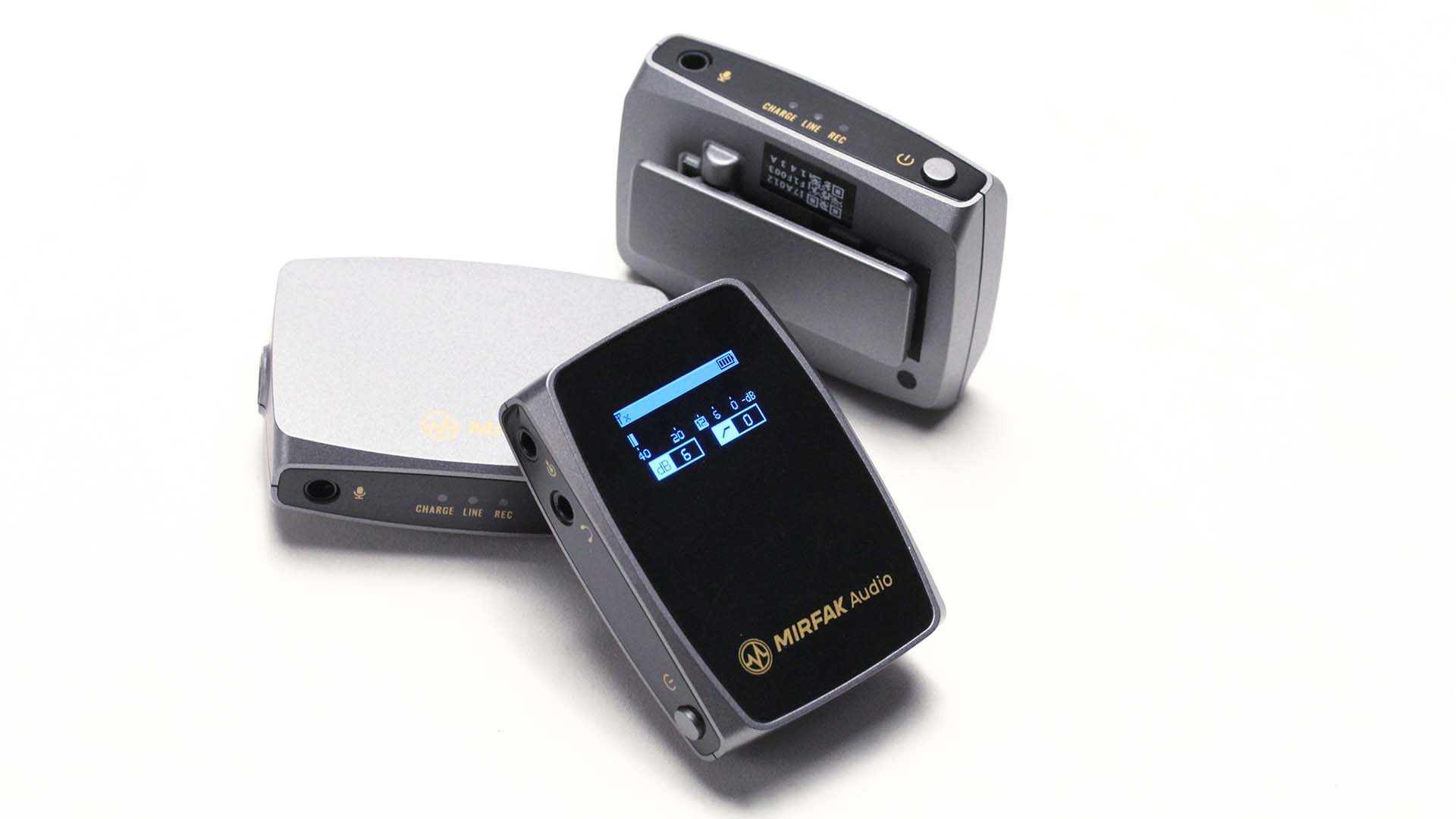 Mirfak’s WE10 is a very inexpensive 2.4GHz radio mic. It has an inbuilt microphone, lots of accessories and, unusually, onboard recording. Let’s find out how all that has been packed into such an affordable item.

The brand is an offshoot of popular production electronics manufacturer Gudsen, and “Mirfak” might be a reference to Alpha Persei, the brightest star in the constellation Perseus. It was named Mirfaq al-Thurayya (“Thurayya’s elbow”) by Arabic astronomers and is called Mirfak in modern practice. Apparently, said star portends luck; let’s see if that luck holds as the WE10 competes against the likes of the Røde Wireless Go.

The WE10 Pro kit includes two transmitters, a receiver and an absolute armload of extras. The transmitters and receiver live in broadly identical cases which and charge via USB-C, with a three-way splitter cable included. There are two lavalier mics with foam covers and clips and two fluffy windjammers which cling to the top of the transmitters under elastic tension, protecting the inbuilt microphones.

The receiver has two 3.5mm jacks for line and headphone outputs (the headphone output is unusual and welcome) and there are cables with both TRS and TRRS jacks to accommodate DSLRs and cellphones. Certain iPhones will additionally need the appropriate lighting audio input cable. 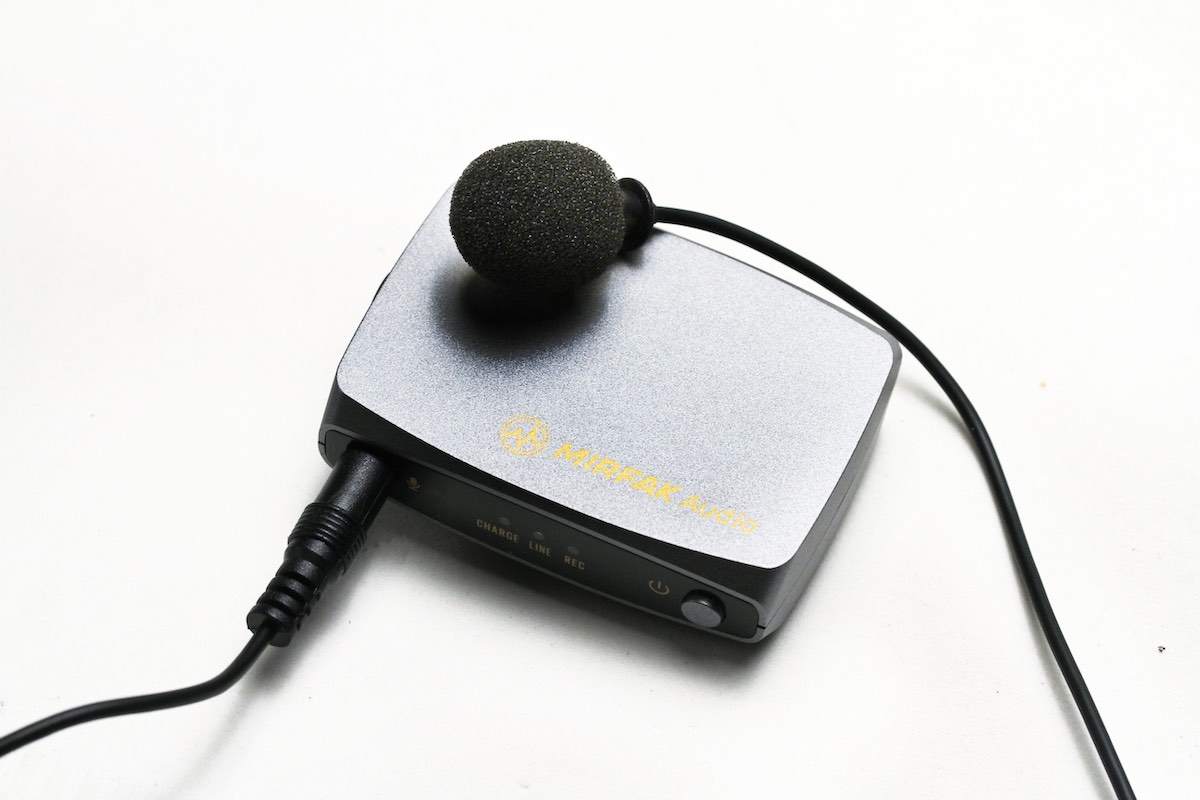 The lavalier with supplied foam cover.

It’s a comprehensive package, and at under UK£200 it’s also tremendously affordable, coming in cheaper than the Røde option. The price offset is extended somewhat by Mirfak’s onboard MicroSD recording feature, and the fact that the Mirfak includes microphones and cables that represent a not-insignificant extra cost for purchasers of the Røde.

The system works the moment it’s switched on, with a sensible 50% storage charge applied to the batteries in the factory. There’s a procedure for pairing transmitters and receivers but it doesn’t seem to be necessary on newly-purchased sets. The controls are simple, with one button for power and a sliding switch to activate or deactivate recording on the transmitter. The receiver has a power switch and three pushbuttons which control output level, overall mute, and low-pass filtering.

The belt clip is designed to double as a cold shoe adaptor, so the receiver will sit atop a camera and connect via a single cable. The transmitters have inbuilt microphones and are light enough to clip to a sturdy lapel. For the highly-mobile vlogger, then, the complete system could be as simple as transmitter, the receiver and audio cable, assuming most people have USB-C cables for charging and something to charge from. Charge time is perhaps an hour and a half; the company claims an eight hour runtime for the receiver and five for the transmitter, which is reasonable.

The MicroSD slot for recording.

Recordings are in wave format, and it’s easy to assume this means uncompressed. Wave files do support compression and the ADPCM codec, which dates back to early data telephony in  the early 90s, is used here. This suggests that the WE10 might be using ADPCM as its on-air codec, though we can’t really tell. This will cost us something on the recording, though ADPCM was always intended for voice compression and it’s certainly easier and less power-hungry to handle 177kbps of data as opposed to the 768kbps that mono 16-bit 48KHz audio would otherwise require. Some hardware devices don’t like playing ADPCM wave files, though most software handles it transparently.

The inbuilt mic is non-directional and more sensitive than the lavalier. Neither is fantastic; what could we possibly expect for the price, but they’ll satisfy many YouTube auteurs. The inbuilt mic hears the room in both a positive and negative sense; it would probably work as something to be placed on a desk to capture a rough track of a group discussion for later transcription, or something like that. There’s no transmitter gain control or clever peak compression. Quality of the transmission seems reasonably solid and the company’s claim of a 20KHz frequency response is reasonable. It’s hard to tell what’s really going on without a better microphone. 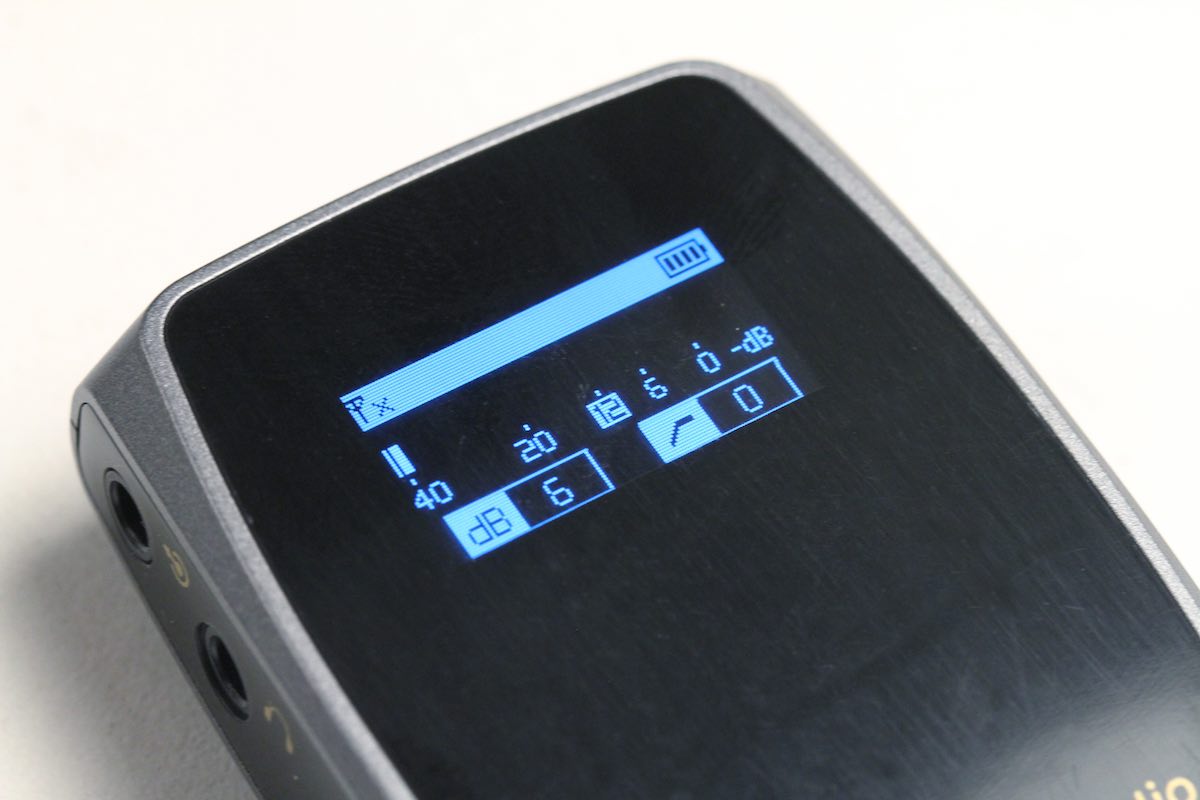 There is just barely enough delay in the system to make it difficult to speak coherently while listening to the headphone output, though that sort of delay is endemic to data radio mics, can be tweaked-out in many cameras, and therefore won’t concern most people.

It’s impossible to avoid the reality that the WE10 is very cost-controlled and less capable than, say, the Deity Connect, but it’s also comprehensive and functional. It’s hard to objectively assess range, which will be affected by the local radio environment on any given day, but it’s certainly enough for an interview room. The great thing about it is convenience and simplicity – switch on, plug in and go. It’ll suit online moviemakers who’d prefer to avoid cables draped around the back bedroom or travellers who need to travel microscopically light, and for those people it’ll probably work quite nicely.