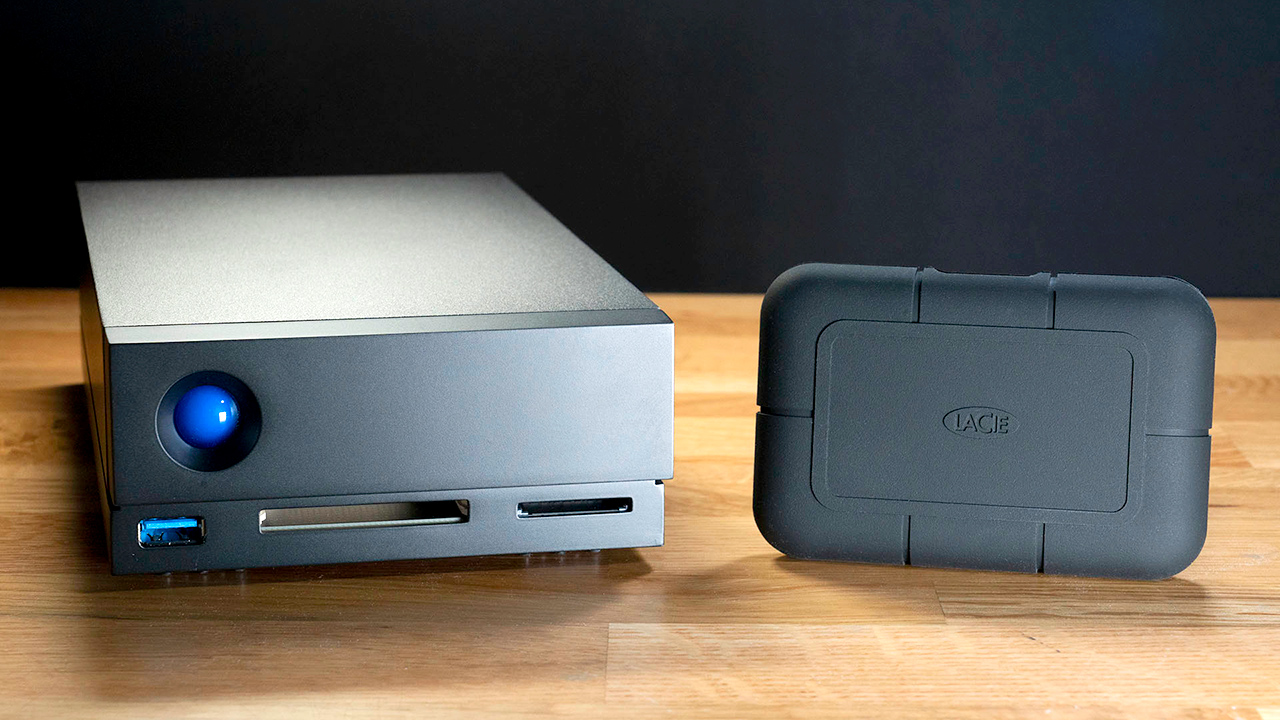 LaCie have been in the external drive market for some time, my first encounter with them was with their external d2 Firewire drives about 15 years ago. Now with the 1big Range and Rugged Pro SSD  they have both large and fast options with Thunderbolt connectivity. I was interested to see what these drives bring to the party.

The first thing you notice when taking the 1big Dock out of the box is just how dense it is. The included 16TB drive version that I tested (£659,99) and the simple Neil Poulton design go most of the way to contribute to the monolithic impression it makes. It’s the sort of thing you could easily imagine HAL would use as his external expansion drive of choice but with a blue LED instead of a red light.

However this dock does eschew some features that most traditional Thunderbolt docks include. There’s no Ethernet connection and no USB-C 10Gb/s support outside of using the Thunderbolt pass through port. It does however allow you to hook up a USB-A device via the front mounted hub enabled socket, although this is limited to 5Gb/s. You also get Display Port 1.4 connectivity and a recessed firmware update button on the back. Aimed squarely at the media heavy user it’s has built in Compact Flash and an SD card slots with UHS-II support. 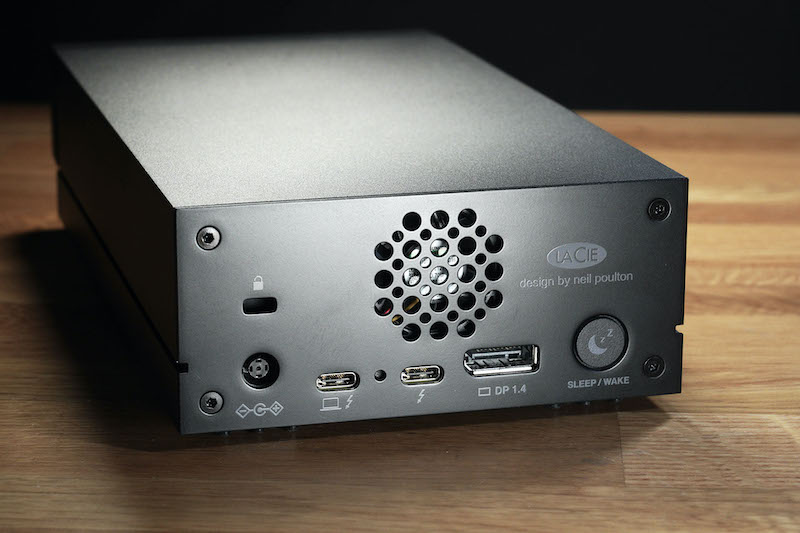 User upgrades aren’t limited to firmware as you can simply open the drive drawer and easily replace the provided HDD. The 1big doesn’t rely on passive cooling either as it has a built in self regulating fan at the rear. It works quickly for a single HDD drive, I managed speeds of 263 MB/s read and 265 MB/s write to the internal enterprise class IronWolf Pro.

The 1big also has a power pass through feature for up to 70W of power to your laptop if you connect up your original charger to the Thunderbolt port. This is a little disappointing, for a start 70W is quite a low figure - some other docks offer up to 96W without having to use your laptop power supply as well. Secondly if you’re not using an additional laptop PSU you’ll only get 45W or up to 30W via the Thunderbolt socket if daisy chaining other devices.

LaCie also have the Rugged Pro SSD which offers connection over USB or Thunderbolt and supports data rates of up to 2800 MB/s. In my testing of a 1TB version (£379.99) I managed to achieve 1980MB/s write and 2732 MB/s read when connecting over Thunderbolt to an M1 Mac Mini. It’s small in size but features great speeds and has the benefit of working over both USB-C and Thunderbolt, something that the similar Samsung X5 can’t do. Although when using USB-C speeds are of course limited, in testing they were 433 MB/s read 420MB/s write. 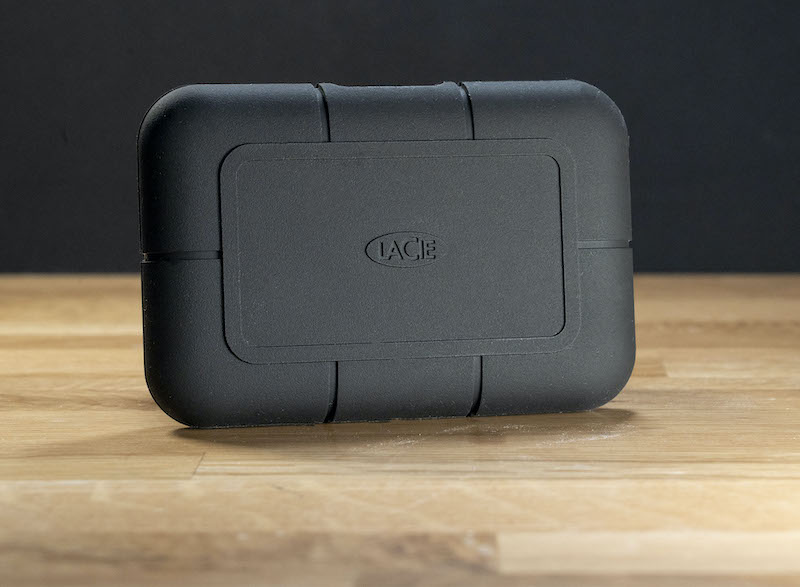 In the product line up as well as several smaller HDD based docks there is another version of the 1big that uses built in NVME SSD storage. This offers 2 or 4TB versions instead of traditional spinning disc but as you might expect this attracts a higher price for not as much storage - a range topping 4TB unit is £2500 - although it does include CFast and CFexpress slots as well as SD card support.

All the versions of the 1big and Rugged SSD come with a 5 year warranty which also includes data recovery services for the warranty period, something that you hope you’ll never need but is handy when you do. Also included is a 1 month trial of all Adobe Creative Cloud apps. 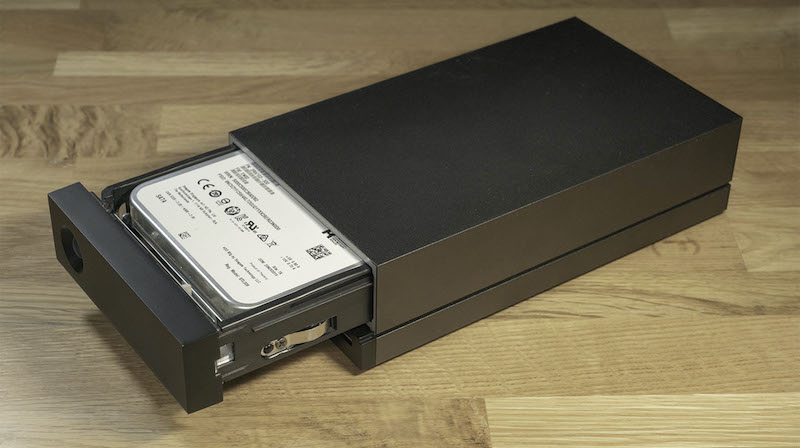 The replaceable drive inside the 1big Dock.

The thing to note here is that you can combine the 1big 16TB and the 2TB version of the Rugged Pro SSD for £639.99 + £690 for about the same cost as the £1300 1big 2TB SSD version. Effectively you are getting a 16GB IronWolf Pro drive for £30 but without the newer CF format support. Worth considering. Although another downside of this approach is that you then have no free Thunderbolt port on the dock but it might be a worthwhile sacrifice.

There’s room for improvement with the 1big, it may suit those not needing a full dock but where a combined card reader and external drive with additional connectivity would make sense. On the other hand the Rugged Pro SSD is something that could easily find it’s way into my pocket workflow.