iZotope RX8 Advanced: One of the best just got better 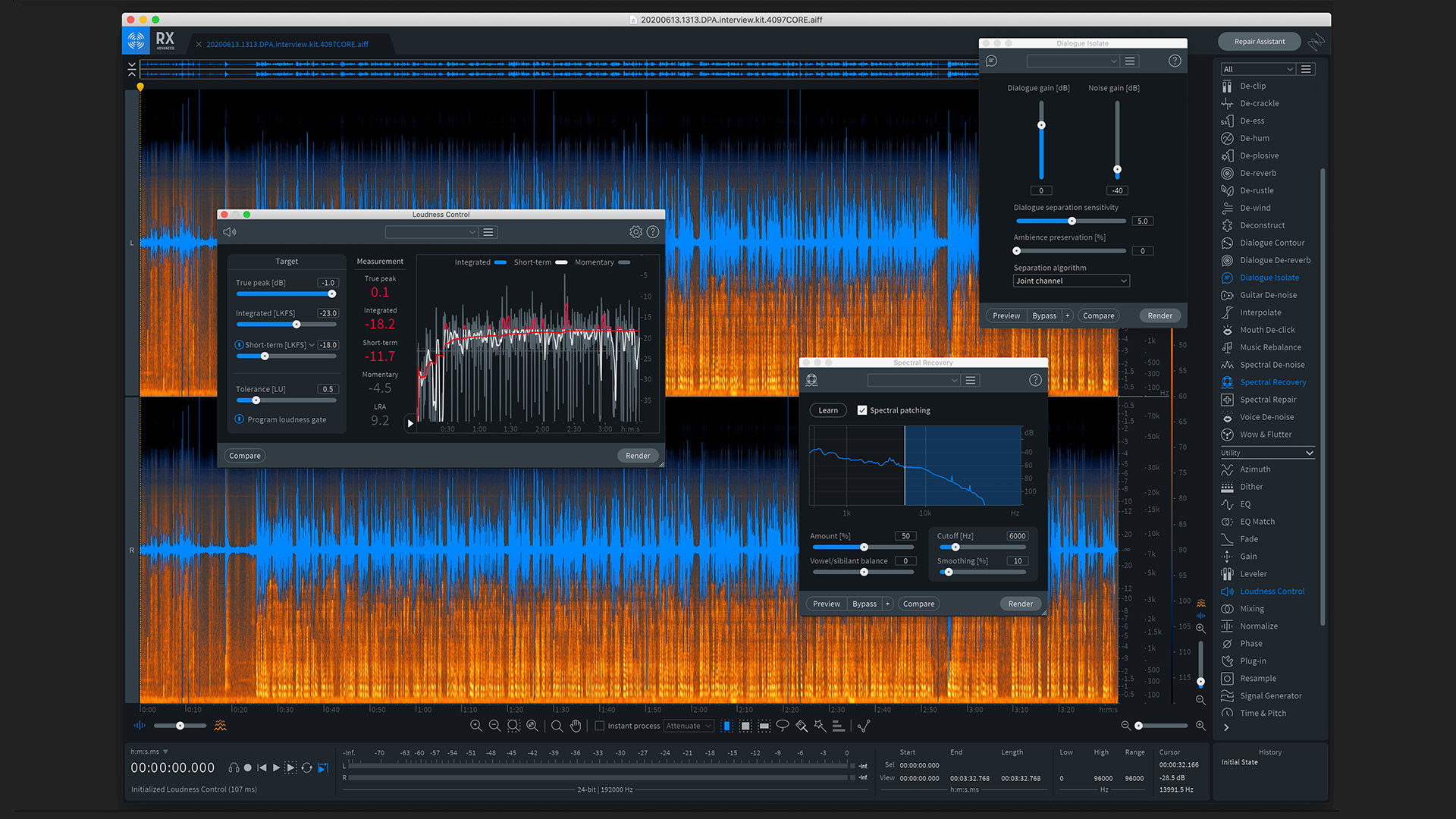 RX8 Advanced improves on a number of features like it’s A.I.-driven Music Rebalance and Dialogue Isolate, its Loudness metering and more. There’s also a new module, Spectral Recovery, which restores frequencies above 4kHz which is especially useful for improving the audible quality of video calls, real-time audio streaming and podcast interviews.

First off, RX8 Advanced has just become more powerful in that it now supports up to 32 tabs with audio data and horizontal scrolling — the latter which is a real boon when you use an Apple Magic Mouse or Magic Trackpad.

I’ll be going over the most interesting new and improved modules for filmmakers, starting with the De-hum module which now uses an improved detection and reduction algorithm to automatically identify the base frequency of the unwanted hum. It is also more precise at removing it and its harmonics.

Loudness is a big deal with recordings of rock concerts and other loud environments, such as factory noises, etc. It’s also a bit of a puzzle to find the right loudness settings when you’re mixing and mastering sound. Up till now, I personally would use NUGEN Audio’s excellent loudness apps for that, but iZotope has improved RX’s loudness module so much that this won’t be necessary anymore.

The Loudness module in RX8 has many preset loudness standard targets to ensure your audio conforms to broadcast requirements. Its monitor gives a fantastically clear overview of your levels using both numeric and histogram readouts for integrated, short-term, and momentary loudness. And a perhaps less spectacular but great feature is that you can now actually resize the module to your requirements.

Audio transfer protocols over the internet compress the audio and remove high-end frequencies that aid in clarity and intelligibility. Spectral Recovery restores frequencies above 4 kHz, turning grainy dialogue audio into clear, articulate recordings. This is a feature that has clearly been added because of the growing interest in remote interviews, video conferences and podcasts in particular. It works incredibly well too.

For vloggers, podcasters and filmmakers, Dialogue Isolate was a very helpful addition in RX7 to isolate the spoken word from background noise, even when there are a lot of transient background sounds. Yet, when you turned up the algorithm to isolate voice from really noisy backgrounds, the results were a bit robotic. No more of that robotic stuff in RX8. I tested this with exactly the same recording and settings in both versions, and RX8 is vastly superior.

The module has an improved Ambience Preservation and, even without fine-tuning that setting, it succeeds in isolating a more natural sounding dialogue — even when noise reduction is pushed to high levels. In fact, the module has become really very effective at increasing the level of dialogue in challenging low signal-to-noise ratio conditions. The only thing that now still sounds a bit “off” with high levels of isolation is when the speaker takes a breath. You can’t hear that anymore either and that sounds a bit weird.

To wrap it up, iZotope once again pushed the envelope with RX8 Advanced. It’s increasingly becoming a sound and audio editor to fix recordings that would have been garbage material only some three to five years ago. And it sure beats all those A.I. driven automatic sound correction plug-ins that are available nowadays.