Say goodbye to inputs and outputs. Say hello to connecting everything to everything [sponsored] 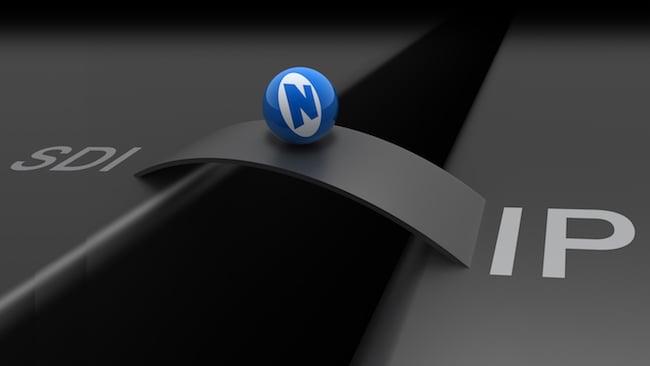 Take me to the bridge: Video production over IP is happening now

There are dozens of reasons why video over IP is an important new technology, but one of the biggest is sometimes completely overlooked. It’s virtualisation. It sounds abstract, but it’s very easy to understand. And it’s a vitally important reason to choose IP as your next video infrastructure.

In previous articles, we’ve talked about some of the seemingly miraculous properties of networks. How you can carry signals in both directions; send multiple signals down the same cable and “un-mix” them at the other end. It’s probably wrong to talk in terms of signals and cables. It’s more about information. There’s the information that is the video itself, and there’s information about it: where it’s come from, and where it needs to get to, for example.

Once you’re freed from having to provide a point-to-point connection for every signal, and once you acknowledge that multiple signals can go down the same cable, then wonderful things start to happen. Perhaps most strikingly, physical inputs and outputs are mostly no longer needed. Nor are routing matrixes. Connecting signal flows is now a matter of selecting sources and destinations from a menu. This is the beneficial effect of virtualisation.

For example, video processing can be housed in a box that has no controls on it. A control surface (like that of a video switcher) doesn’t need any video processing in it. Cameras don’t have to be directly connected to either. Inputs and outputs to the conventional world of SDI can be anywhere on the network. This opens up extra dimensions of flexibility. In effect, the familiar landscape of the hard-wired studio infrastructure is replaced by a virtual one.

But most of all, it’s immensely practical.

We mentioned recently that the NewTek IP Series of network-connected live production equipment might be seen as the iPhone of the live production world, because it is a product that not only embraces a new paradigm (live network video production) but does it so capably that there’s no going back to the way it was in the past. But why is this? Exactly what are these advantages that are so significant that they make everyone wonder how we managed before video over IP?

When the only interconnects in a live TV studio are over IP there’s no need for conventional inputs and outputs. SDI connections become redundant unless they’re to connect legacy equipment. SDI is point-to-point, but networks are every point to every point, and they carry multiple video channels - sometimes hundreds - on a single cable.

What this adds up to is that IP video devices can be connected anywhere on a network, and they will be visible everywhere else. If a single cable can transport multiple video streams, then there’s no need for an input or output for every source. When you break the hard-wired connection between a source and an input or an output, that’s another degree of flexibility. Instead of wires, it's like an interconnecting fabric.

In fact, it’s almost like every device in the network is part of the same machine. It’s as if everything’s in the same box. Except that it’s not. It’s this amazing duality between the virtual and the physical that makes video over networks so enticing.

It’s enticing because you can treat a whole building as if it’s the same device. Everything is connected to everything. It all happens in real time. Outside sources, cameras, graphics: all “picked up” by the processing unit, all controlled by the main control surface.

With a fast network infrastructure, you’ll rarely have to re-cable anything, because all the connections are set up with software. You can see an example of how this works in practice here.

The video production industry has known for years that video over IP is coming. You could over-simplify this by saying that it has taken this long for IP technology to reach the speeds that are necessary. But that’s only part of the story because whenever manufacturers are faced with having to work with each other, new “standards” are born; but it’s often a painful process. First, you have to get agreement. Then you have to make it all work. This is happening right now: various international bodies are working to ratify multiple standards.

Meanwhile, NDI, which is free to anyone that wants to use it, is available and fully working now.

If this isn’t transformative, then nothing is.

Find out more about NewTek’s video over IP technology for live production here.