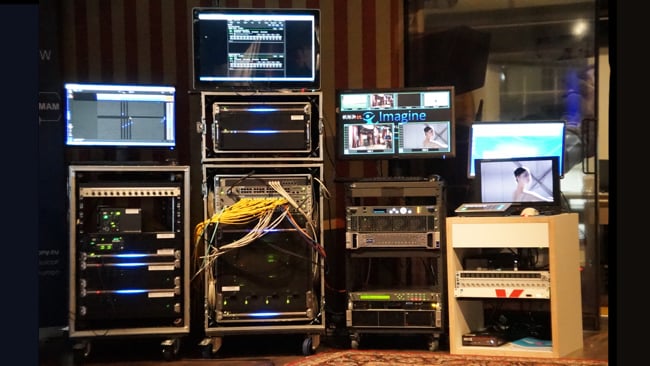 The IP future comes into focus

Video over IP is going to replace SDI, not just in facilities, but as I/O on cameras too. When is it going to happen? Starting from now, it seems.

I’ve just been to Pinewood Studios in West London to the launch event of Sony’s IP Live production system. While the focus on the event was the working IP-based live production demonstration, what, I think, mattered more, was that, to quote Hans Hoffmann of the EBU (European Broadcasting Union) “The move to IP cannot be stopped”.

This is the boldest official claim that I’ve seen about the future of IP video, but one that I’ve been expecting for some time.

Sony’s IP Live system was impressive because it is probably one of the first end-to-end demonstrations of a high end live production environment. It’s important to say what we mean by this. What Sony has achieved here is the ability to produce live programs at the highest level using only IP networks as the interconnectivity infrastructure. There’s still a long way to go before there’s complete multi-vendor interoperability, but it’s encouraging to see that Sony (like NewTek, with its NDI) has some impressive partners on board.

Here’s how Sony outlines the scope of their IP Live system in their own words:

"Sony envisions a future in which IP replaces SDI as the standard broadcast signal connection. IP has the capacity to handle all signals: video, audio, metadata, sync and control. We look forward to IP Live interfaces on cameras, monitors, switchers and production servers. Legacy SDI equipment will be easily accommodated through SDI-to-IP converters. At the core of the IP Live system, large, expensive SDI routers will be replaced by inexpensive, commercial off-the-shelf (COTS) IP switches. And the ubiquitous coaxial cables and BNC connectors will be replaced by Ethernet cables and connectors such as copper, fiber and coaxial. This is Sony’s IP Live Production System."

So that’s it. Just in case you were still wondering, SDI’s days are numbered. Sony, multiple other vendors, and the EBU are supporting the move towards totally IP environments, and that means that the future is pretty much mapped out. Here’s how it is likely to pan out.

At this stage, I’m not going to delve too deeply into the technology. IP video is as arcane as it is exciting. So I’m going to focus on some basics, but in a way that shows the importance of this technology platform to broadcast and live production.

First, there was SDI. Well, actually it wasn’t first. Before that, and pretty much using the same cables, was analogue component video. But since the advent of digital video, SDI has been almost universal. So much so, that we immediately know what to do when we’re faced with any sort of SDI infrastructure. It’s intuitive, because it’s simple. The signal flow through an SDI cable is unidirectional and carries strictly one channel of digital video, plus two or more channels of digital audio.

IP video tantalises us with a much more flexible way of working. Multiple signals can travel - bidirectionally - through the same cable. And instead of a relatively expensive SDI infrastructure, all that’s needed is industry standard network cables.

Perhaps surprisingly, then, the first stages in the move to IP video involve what is effectively SDI tunnelling though IP. An SDI signal is packaged as an IP stream and to do this, all that’s needed is an SDI to IP converter. On the way out of the network, you need the reverse to bring the IP traffic back into the SDI domain.

Now, clearly, if all you’re going to achieve by moving to IP is the same thing you had before but using a different kind of transport system then not very much has been achieved, except, perhaps very much greater routing flexibility and almost complete compatibility with existing equipment. That’s really important at this point. So, as an intermediate stage, despite the disadvantages, this makes sense.

The next stage will be to extract the essence from the data stream and package that more optimally for life in the IP world. Throw away the shackles and constraints of SDI and we’ll be able to achieve much more. Exactly what this means in practice we’ll have to wait and see but it is an important and likely highly beneficial move away from SDI practices.

The next stage is Self Management. This will have huge benefit. Again, the details aren’t clear at this stage (quite a few aspects of the long and sometimes tortuous journey from SDI to pure, optimal IP are not cast in stone yet). Essentially, this is the bit where you stop saying “this is getting more and more complicated” and start to say “that’s amazing: it’s configured itself completely automatically”. This part includes Discovery - the process where the devices on the network can see other elements that they can communicate with, understand their capabilities and self-configure into a useful workflow.

Typically, users will find self-managing IP video networks easier to use and potentially more reliable too.

Finally, there’s virtualisation. If this sounds pretty abstract, then it is, but it’s very easy to understand why this is a good thing. Virtualisation takes us beyond the idea of a single input or output for each “signal” Traditionally, if you had a device with four video outputs, it would have four SDI connections. That’s quite irrespective of how many streams of images it might be capable of if it weren’t constrained to a fixed number of outputs. With virtual I/O, each device will be able to output as many streams of video as its capabilities will allow. This is hugely beneficial. It means that every device will be used to its full capacity, without the artificial constraints of either I/O or one-to-one unidirectional cabling.

In an IP video virtual world, the physical infrastructure will no longer be the dominant factor in the performance and capabilities of a system. We will be able to assume that it’s fast and connected enough. At this point, distributed processes and services will be mutually discoverable, and video production facilities will find new levels of performance that far exceed what we have today.