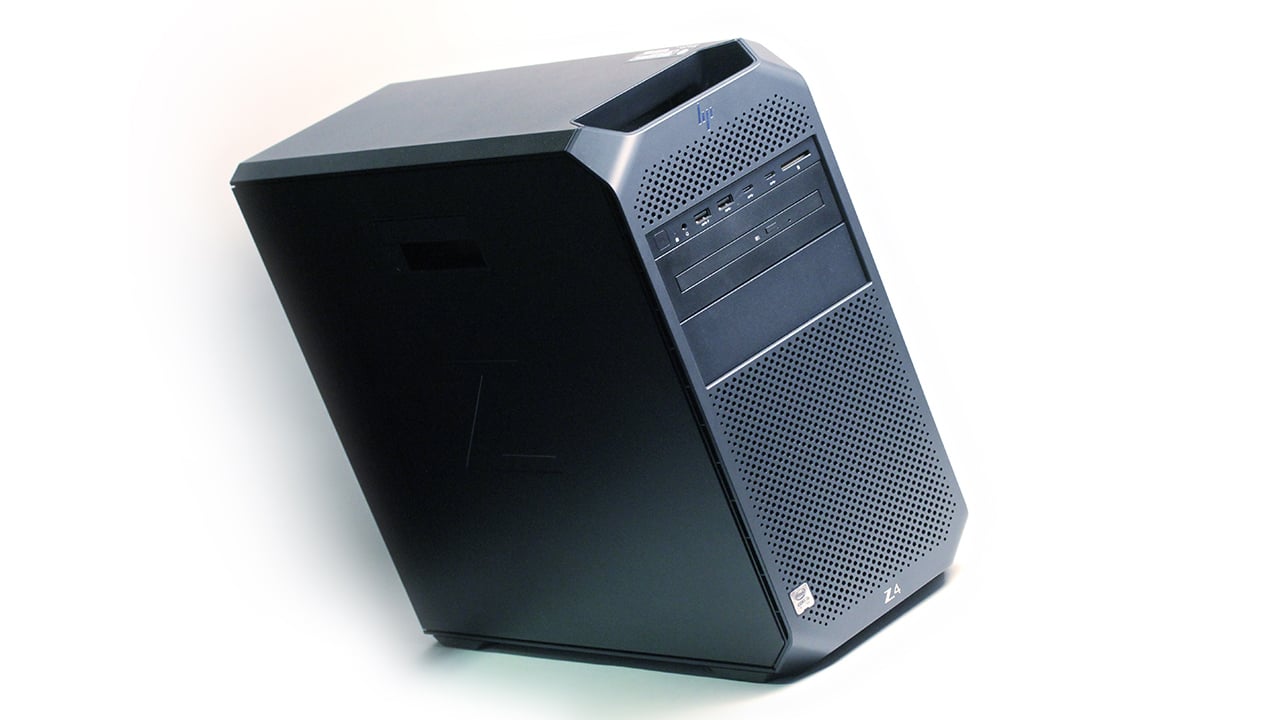 We review the HP Z4 workstation, a compact, yet high powered system that could be perfect for media creators.

The company we now call HP owes at least part of its existence to the film industry, having been founded in 1939 after Bill Hewlett and David Packard made a successful sale of audio test gear to Disney for the production of Fantasia. It’s an enduring association, with the Dreamcolor line of displays marketed very much toward the creative industries.

It's pronounced Zed. Zed. Good, now we all understand.

Today I'm looking at one of HP’s Z-series workstations, which is complicated because the suitability of any computer for any job depends on a lot of factors. We could use synthetic benchmarks, which have the advantage of giving us easily-compared numbers, but they might not represent exactly what anyone is trying to do. We can put together test projects in popular software and report how things go, but it’s very difficult to make comparisons between machines that way. So, I'll do some benchmarking today, but I’ll also get into how and why various parts work well for various jobs.

The machine on test here is an HP Z4, putting it in the upper-middle of the range, above the Z1 and Z2 and below the Z8. It’s a compact device, the size of a conventional desktop PC, and ideal for owner-operators working out of the back bedroom as well as companies keen not to buy everyone a bigger desk. It’s particularly suitable for Apple refugees who need more places to plug things in without the entire arrangement becoming a Medusa’s hairdo of Thunderbolt cables.

The Z4 packs a lot into its diminutive case. It's available in a variety of configurations, but the one I have here sports the Core i9 9980XE processor, an 18-core beast with a generous 24MB of level-three cache, capable of turboing up to 4.4GHz and idling at 3GHz. It’s here that we encounter an interesting consideration: 18 cores makes this very much a premium part, bumping the price of the CPU by twenty or twenty-five per cent over the 14-core 10940X option. There are some architectural differences between this, which is an example of the high-core-count silicon intended for servers, and lower-core-count parts, in how the cores are connected together. 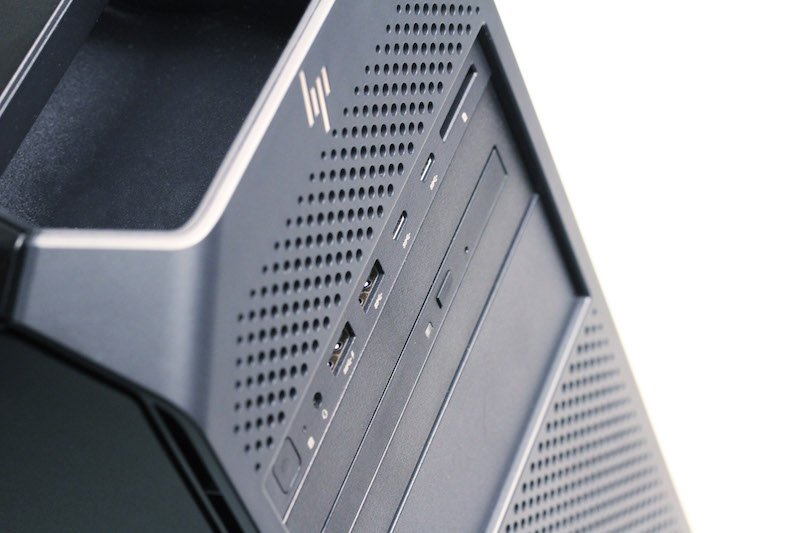 Plenty of front panel IO; whether that optical drive is really crucial is another matter.

Blender’s benchmark rendered the difficult “victor” test scene in a hair over six minutes, which is likely to have involved at least some GPU work (other Blender results are in the images.) The Phoronix test suite’s FFmpeg benchmark is a little basic, though it’s at least a consistent target, and probably a purer CPU test. Results place this particular Z4 in the 81st percentile of all submitted results, and that’s on tasks that won’t thread out very well. It’s a big, scary CPU. If your workload likes cores, this CPU will like your workload, and for someone interested in, say, rendering 3D scenes, the extra cores might make the 9980 worthwhile. Otherwise, a lower core count might make for better economics.

The Z4’s GPU is an Nvidia RTX 2080 Ti, which represents a welcome change in the approach of workstation designers who might previously have insisted on the Quadro series of GPUs for workstations. Much as Quadros were great at CAD for engineering and architectural work, in reality they did little for most film and TV people. This realisation possibly underlies the effective shuttering of the Quadro brand at the end of last year; now, there’s RTX and two sets of drivers, one for games and one, titled Studio, for productivity. These tests were performed with version 460.89 of the Studio drivers. 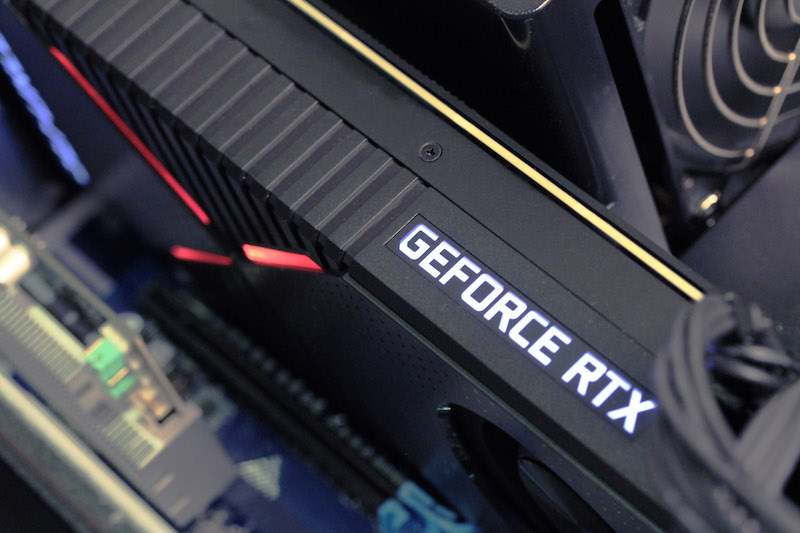 The RTX has 11GB of RAM, which will comfortably handle straightforward 4K jobs in Resolve. It’s not impossible to run it out of space – the sterner 8K grades in the popular Standard Candle benchmark will do that, as the accompanying stills attest – but it’s a reasonable setup for most things and going further gets expensive. On the basis that a gaming benchmark is any sort of test of overall performance, 3DMark’s Time Spy benchmark awards the system around 13,000 points, and an assessment of “good” compared to other test results, which themselves generally represent better-than-average computers owned by people interested in benchmarks. Resolve will run the 4K Standard Candle 9-node blur and single-node temporal noise reduction grades at full rate with GPU utilisation at around 80%.

Storage comprises one M.2 NVMe for boot and programs and another for scratch space – although at around 500GB each, they’re roomy enough to plausibly store footage too. Speed? Well, as with so much modern flash storage, the best description involves a spectacular slit-scan optical effect and the shocked gasp that it’s full of stars from a man whose face is being distorted by acceleration. The boot disk is a Samsung SM951 NVMe M.2 disk and will do one-megabyte sequential reads at three and a half gigabytes a second and write them at nearly two, so that’s where the scratch goes. Even the secondary Samsung PM981, mounted as a daughterboard in a PCIe slot, writes at 2.5GiB/s and reads at 1.5. It’s not the same storage device so it’s not easy to make a direct comparison of the two approaches to plugging them in, but they ought to behave identically so long as all the slots have four PCIe lanes available. HP also offers a dual-device PCIe card which should double the speed of whatever’s installed. 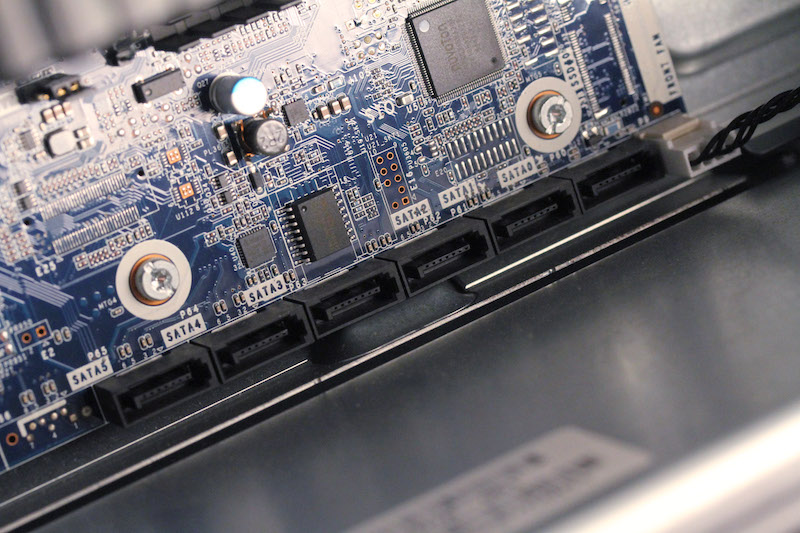 Six SATA ports are enough to mount a modest RAID if there's a need for some serious elbow room.

Regarding expansion, the GPU and storage leaves one PCIe x16-sized slot free. The Core i9 9980XE processor has a total of 44 PCIe lanes but it’s not always easy to figure out how they’re shared around various devices, though the spare slot could be used for a simple display GPU, to leave the RTX 2080 free for compute. Some people will still need spinning rust storage for video footage, and there are six internal SATA ports, one of which is occupied by an optical drive if you really need one. There isn’t space for six full-size hard disks – you might fit four, with a bit of ingenuity – but if you want to plug them in the controller has options for RAID 1, 5, and 10.

Internal layout is almost Mac-sparse, but for the power cables for the GPU.

The Z4 is billed as a workstation and it certainly is one, despite its compactness and quietness. One of the things that’s nice to discover is that the Z4 is nicely laid out internally, with tool-free PCI clamping making upgrades less of a chore. It’s sleek and quiet in a way that recalls Apple again. A machine like this one with a more recent 18-core Core i9 10980XE and 128GB of RAM sells for around £4000, although there are a lot of options and the company might suggest other setups for video people, possibly based around a slightly lower-core-count 10th generation CPU. If there’s an elephant in the corner it’s simply that there is no AMD option (and much less an Arm option, if perhaps the world is swinging that way). With Ryzen glowing in the benchmarks right now, and HP happy to ship AMD’s CPUs in its laptops, it’d be nice to compare.

So that’s what a workstation looks like in 2021. Incidentally, we’ll cover the Z31x display separately – HP’s Dreamcolor range has been tempting people in film and TV for a while.