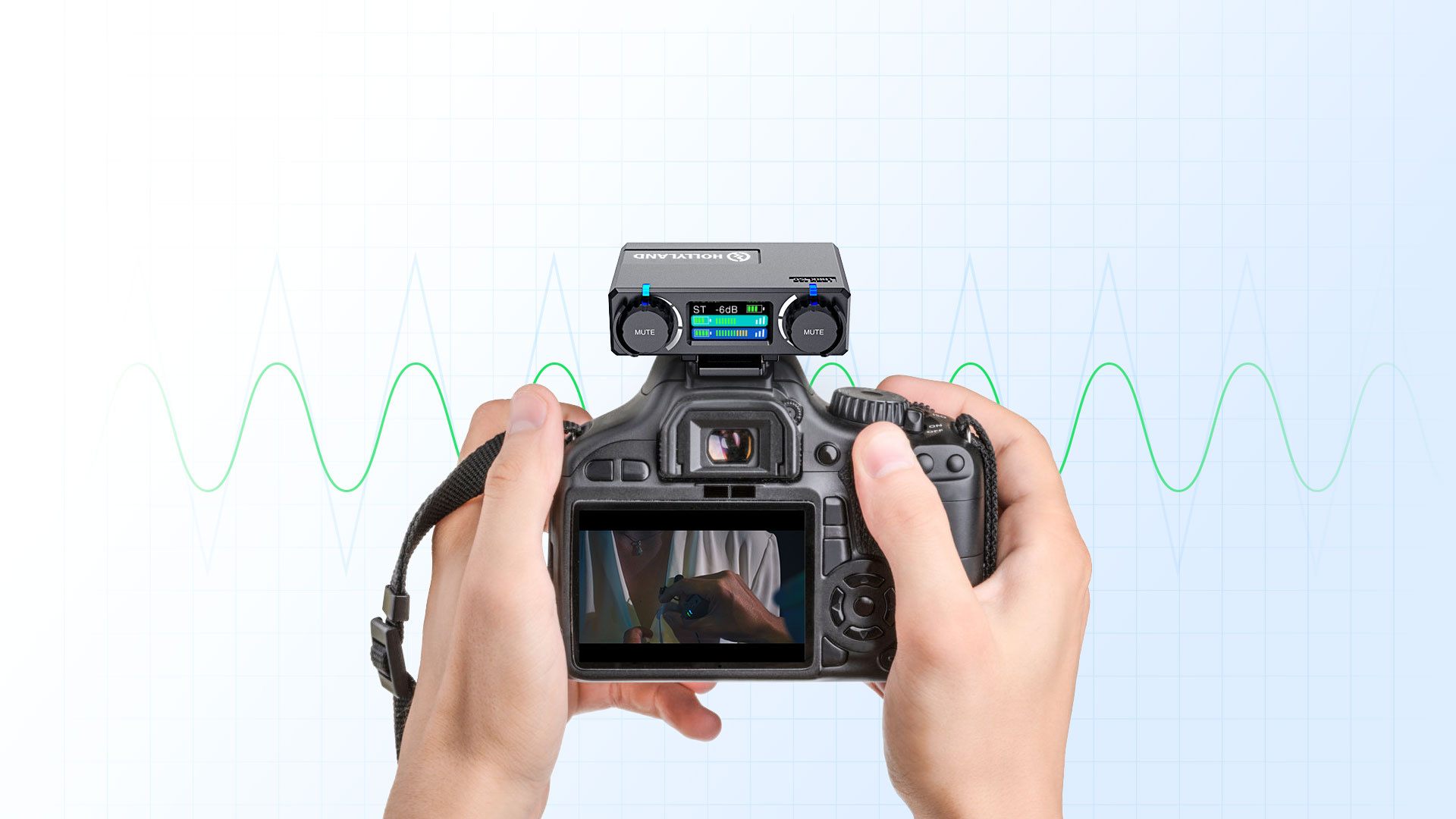 Hollyland has recently entered the consumer arena with the dual channel wireless microphone set up, the Lark 150. Here's our review of this tiny mic system.

This compact 2 channel 2.4 GHz kit enters a marketplace that over the last couple of years has seen similarly targeted budget entries from rivals like, Sennheiser, RØDE and Saramonic - so what makes this setup a contender?  Well, the price of £312 will attract a lot of potential users. For this you get 2 transmitters with lapel mics, a dual receiver, and a storage/charging case. You also get the usual accompanying accessories including long haired wind covers for the built in mics.

The main component parts connect via pins and pads and locate magnetically into the case. Initial build quality is impressive but time will tell. The charging case is not bristling with features - only a single USB-C socket on the back, a very small reset button next to it and a power status LED on the front. No pairing buttons or battery level check indicators here, instead pairing is performed automatically when the units are removed from the case and battery levels for every component are shown on the small receiver screen. 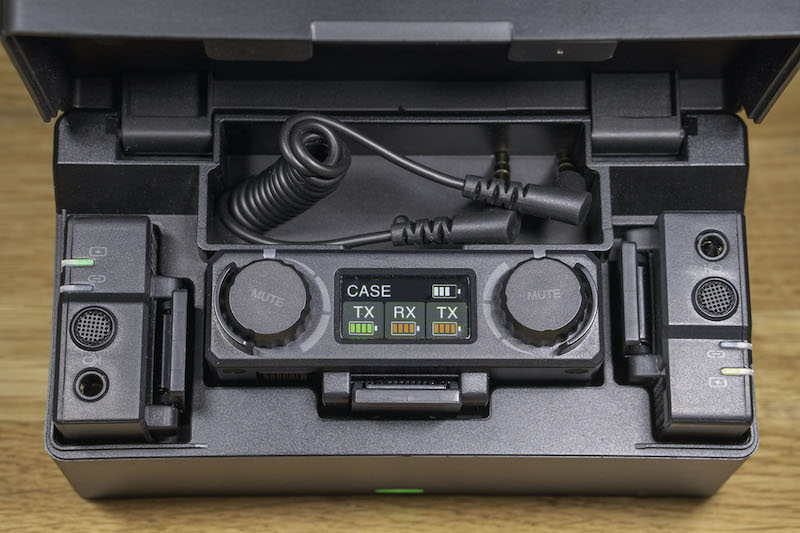 The two diminutive transmitters (22g) are very simple to use with a single combined power and mute button, built in microphone and 3.5mm socket. The included wind covers use the 3.5mm socket as an attachment point. There are no other controls at all on the transmitters at all, just 2 LEDs for link and battery status.

Of course what we all want to know is how do they perform?

Actually for the money surprisingly well - though for this sort of price you cannot expect broadcast level performance. You have to consider that a single decent lavalier mic by itself starts at around the price point for the whole system. As a side note it that appears that the built in capsules are the same as the ones in the wired lavaliers, they match almost perfectly.

As with a lot of its competitors there are no input level controls and no built in limiters, though with some adjustment of output level it’s quite easy to get a good result, and the range is wide enough to suit a lot of different cameras. Self noise of the system as a whole is relatively low, I measured around -69db, which is respectable. However the supplied wired mics are not well suited to hiding with their size - but that’s the expectation and the norm at this price point. 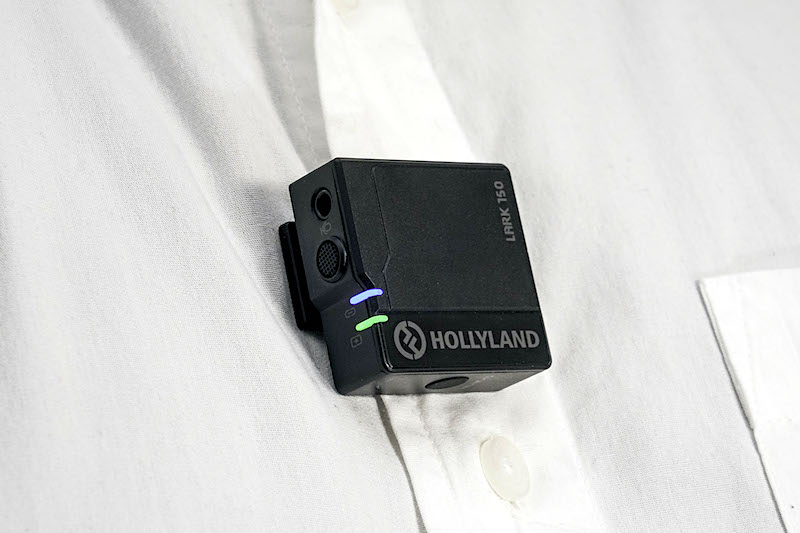 The Lark 150 mic/transmitter attached to a shirt.

Speaking of levels - there is output level adjustment for each channel separately which gives a 21 step range covering 45db. You get a level meter for each channel on the receiver screen and also the ability to record stereo or with one mic on both tracks either at the same level or with a -6db drop on channel 2. There is also a headphone output but the level of this is tied to the output adjustment directly, there is no independent control. It’s also possible to mute the transmitters either from the body worn pack or the receiver.

Each channel is identified via the colour of the status LED when in use - channel one being turquoise and channel 2 blue, this is also reflected in the background of the battery status and signal level part of the receiver LCD screen. I'm not sure whether this is deliberate or not but the receiver reminds me of a very small mixer with it’s layout of individual left and right channel output controls, and it fits snugly into a camera accessory shoe via the built in clip.

As regards to battery life - when testing in a heavy WiFi environment both transmitters lasted about 210-230 minutes, the receiver lasting much longer – although due to the non standard connection method you can’t just hook it up to a USB battery bank with a cable.  As for latency - Hollyland claim a figure of 5ms, in my non lab tests I found it landed somewhere between 6 and 10ms - I couldn’t detect any issues with lip sync.

Given that these units operate in the crowded 2.4Ghz band the performance is not as robust with traditional wireless UHF systems, especially when moving. Indoors it worked well with little to no dropout, especially with the transmitters facing the receiver, though you do have the benefit of RF reflections and reinforcement to aid performance - due to current conditions my tests were limited to about 10m. They even worked well with some vertical separation between the wooden floors of a building with the transmitter placed next to a wireless router.

Outdoors I managed a range of just over 90m, again this was in an area with quite a lot of WiFi activity with the transmitters and receiver having line of sight. When worn on the body away from the receiver the range is reduced and drop out instances increase.

For a future ‘Pro’ iteration there are a few things that could be considered - transmitters that also record to micro SD and a longer a battery life being top of the list. It would be handy to be able to store all the mics and accessories in the charging case, though all this would add to the size which at the moment is a large part of the appeal.

Within the limitations of 2.4 Ghz and price Hollyland have produced a first generation product that performs admirably. I’m really looking forward to seeing what they have planned for version 2.