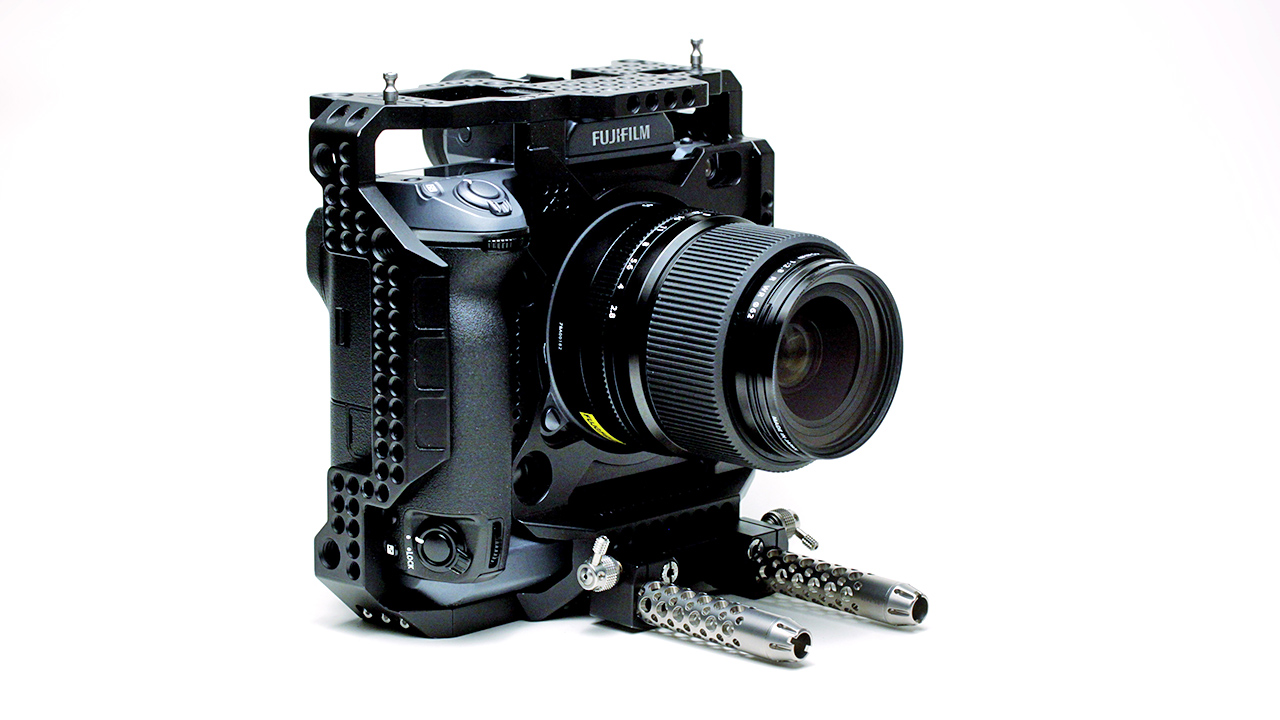 We review the Fuji GFX100, a mirrorless camera with some astounding numbers behind its stills specs. How does it fare for video? Read on to find out.

Sometimes, people like to figure out what the best is in some class of equipment. It’s pretty academic, quite often, as the top few products in any field are often pretty close together, but Fujifilm’s GFX100 is certainly among the highest-specified mirrorless cameras currently available. It has an absolutely Brobdingnagian 102-megapixel sensor that can be clearly seen from the international space station (it’s around 44 by 33mm) and shoots images 11K by 8K pixels up to 16 bits deep to SD cards using Fujifilm’s extra-large GF lenses.

To get the pain out of the way, the GFX100 costs ten thousand units of most currencies, depending on taxes; anyone who’s shocked by that should probably re-read that gigantic spec.

Since we’re not stills specialists, I’ll leave the details of the stills modes for people who are, and we must be fair. The GFX100 is designed very specifically to be a high-end stills camera. It is wonderful and spectacular in that field, and I’ll look at its video features with that very much in mind. 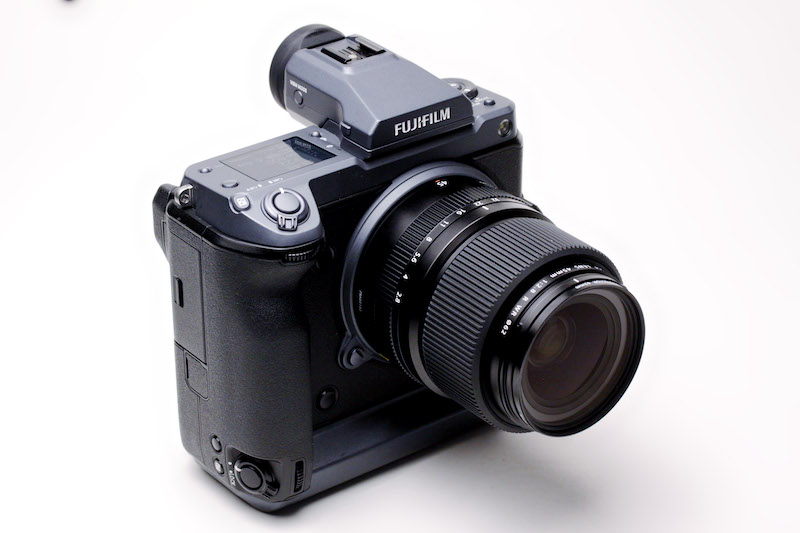 The GFX100 is a medium format camera and is necessarily far from compact, though at 1400g it feels lightweight. Fujifilm supplied the GF 45mm f/2.8 and 110mm f/2 lenses (£1579 and £2599 respectively at Wex), and the body is actually sufficiently lightweight that even the smaller 45 is very nearly enough to nosedive the camera on a flat surface. The lenses themselves, which both have full time manual override, are necessarily fairly chunky, with the 110mm slightly over a kilo, but they’re not outrageously bulky given what they have to do. 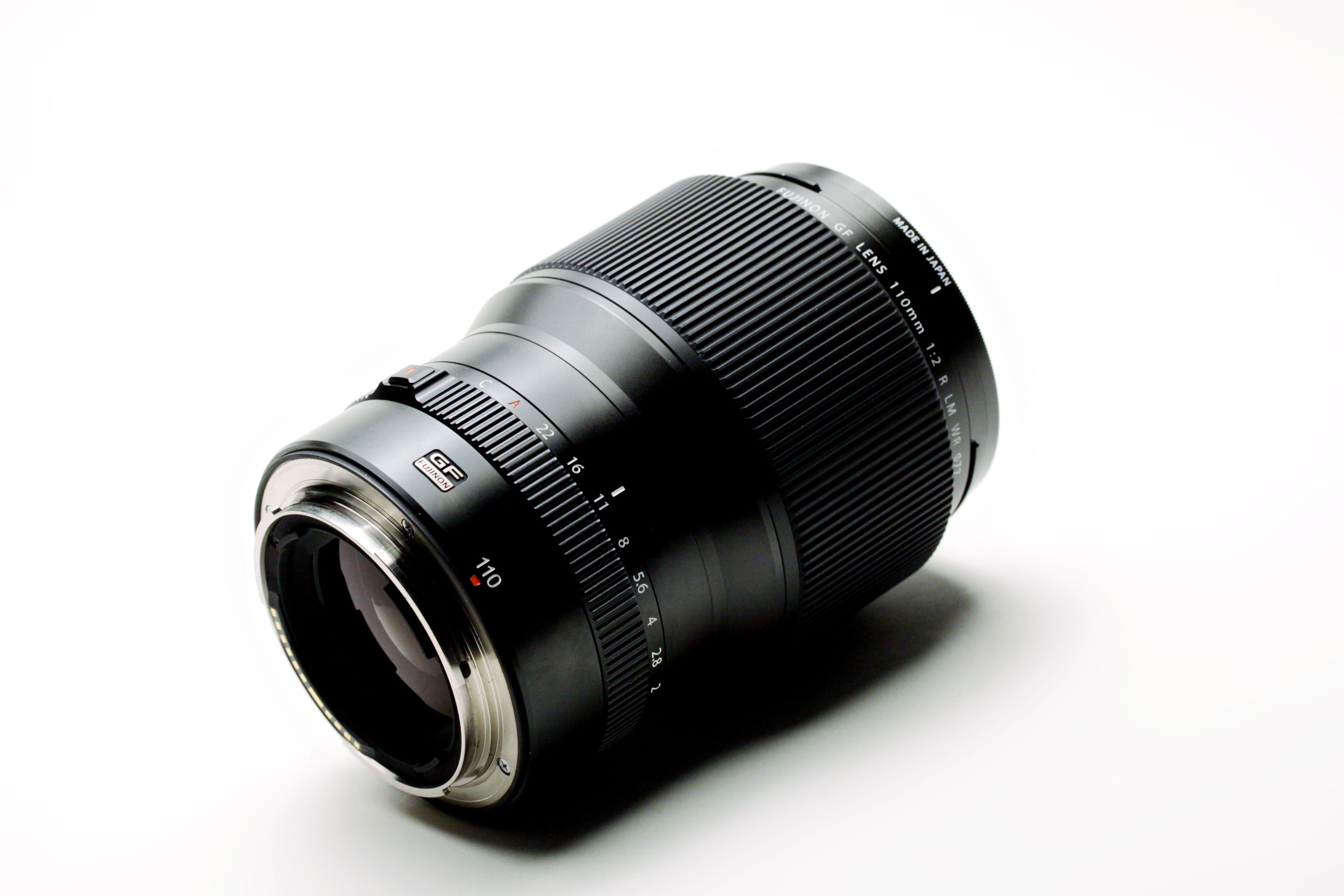 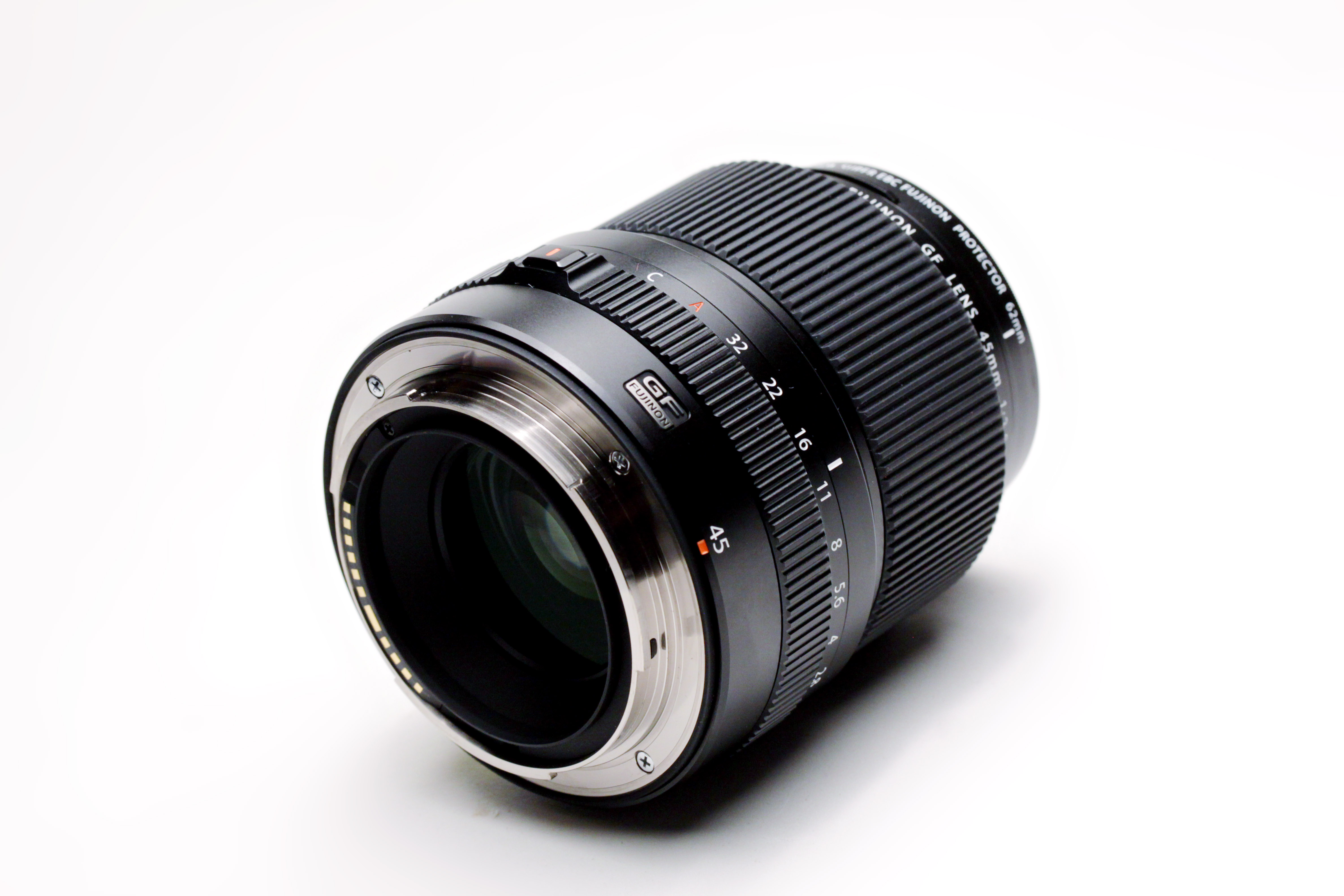 There’s no shortage of displays on the camera, with a conventional folding rear LCD and removable loupe viewfinder that slides onto (and then replicates) the hot shoe. There’s two whole status readouts beside the main LCD; one is a small sliver under it, with another in the conventional position on top. This is a fully graphical LCD and shows not only status but also a histogram in certain modes, which is nice. 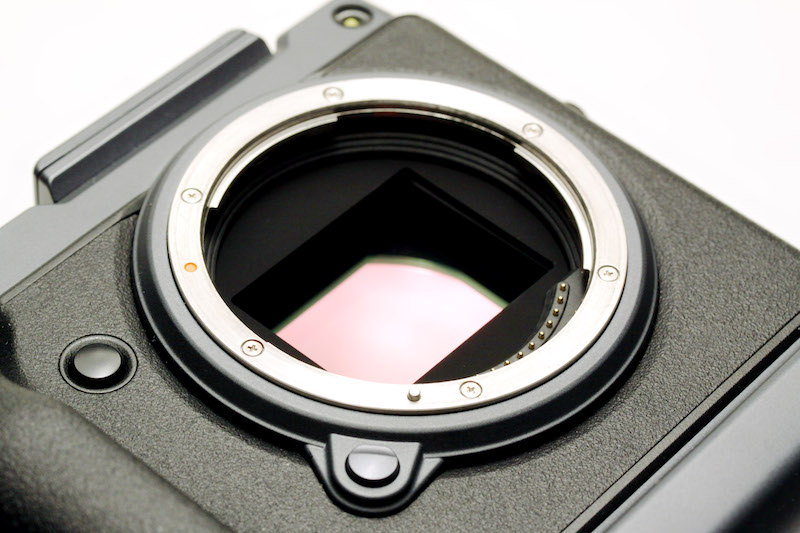 The GFX100 sensor is so big it is visible from space!

In movie mode, the GFX100 uses the full width of its sensor to create either 16:9 or 17:9 frames, meaning it’s exposing significantly more silicon than an Alexa LF (though not so much as the mighty 65.) Recordings are in either H.264 or H.265 to SD cards and in HD or 4K at up to 400Mbps with an option for all-intra frame compression. On paper, the sensor itself has more than enough photosites to produce convincing 8K, but that’s not on offer. The 4K tops out at 30fps and the HD at 60.

Presumably, the sheer size and resolution of the sensor make high resolutions at high frame rates difficult. The stills mode, even in its fastest configuration, achieves 5fps – which doesn’t sound much until we remember the vast resolution. That said, in video mode, the GFX100 feels responsive. Viewfinder lag on any mirrorless camera is often more apparent in lower frame rate movie modes than the high frame rate typically used by stills-mode live view, but the GFX100’s rear LCD and slide-on loupe viewfinder, which looks like a little OLED, still feel fairly immediate. 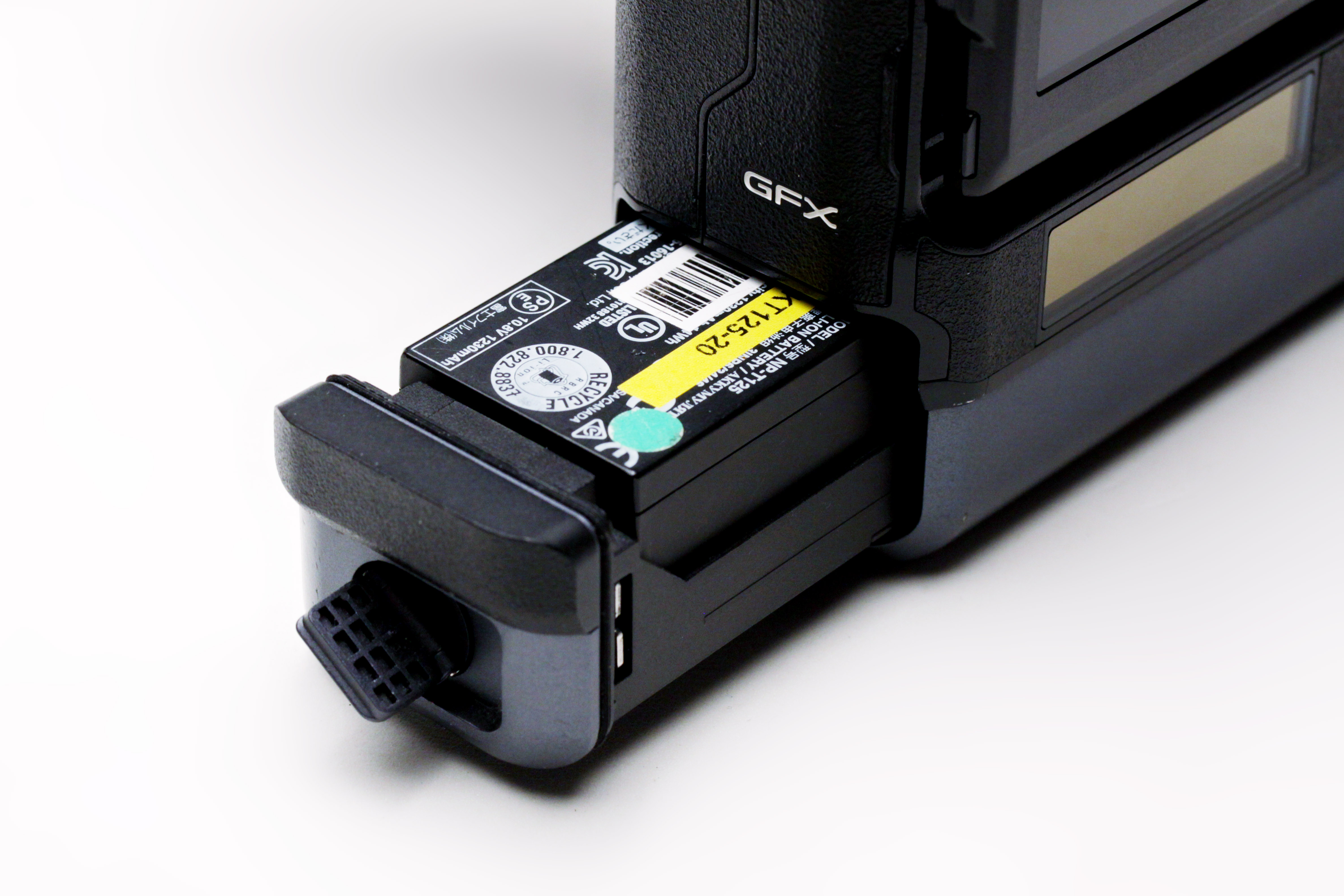 Movie sensitivity ranges from 800 to 12800. Possibly we wouldn’t expect to see the same sort of telephone-number sized ISOs available in stills mode in the more taxing video mode. If we do the math, the GFX100 actually has almost exactly the same pixel size as the X-T4, and while I didn’t get the chance to side-by-side them, it’d be reasonable to suspect that the noise performance per pixel is fairly similar. Both are back-side illuminated sensors of a similar vintage. Of course, the GFX100 has something like four times the pixels, so the technical quality of the stills is as superb as we’d expect.

Inevitably we lose some of that in video mode, as it certainly isn’t reading out all hundred megapixels then scaling the result. The GFX100 creates its 4K output through a certain amount of binning and skipping, which implies a degree of aliasing. It’s probably slightly better than the X-T4, although that camera doesn’t have best in class aliasing performance in video mode to begin with. 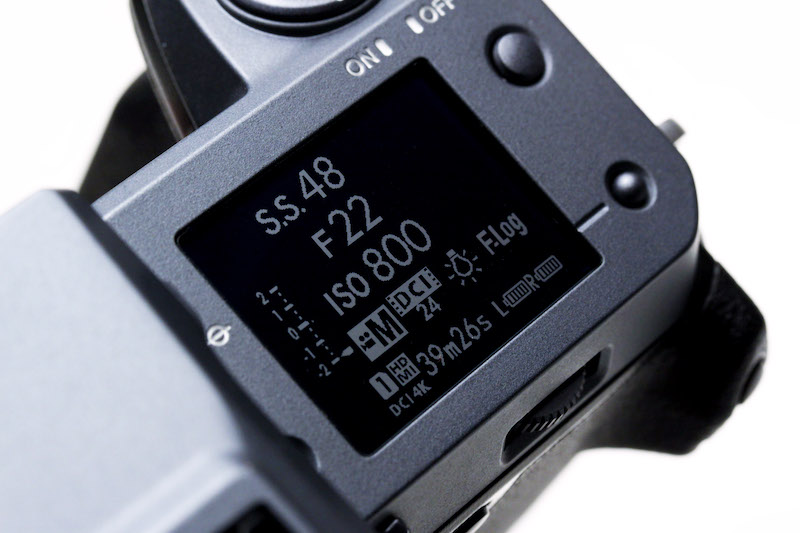 With a sensor the size of a minor United Nations member state, good AF is crucial, and the GFX100 boasts snappy phase detect autofocus built directly into the sensor, the first in the series to offer it. Like the viewfinder, in movie mode it doesn’t feel quite as direct, presumably because the sensor is running at a lower frame rate. The character of the focus changes can sometimes seem a little twitchy. It gets there, but it doesn’t worry too much how it gets there, and the option to smooth things out might not hurt. Of course, small changes in an image can affect what any device sees as a trackable feature and as soon as anyone talks up an AF function someone else will post a video of it having trouble. In the main, though, it’s hard to argue with Fujifilm’s work here. It’ll reliably track moving faces against chaotic moving backdrops. 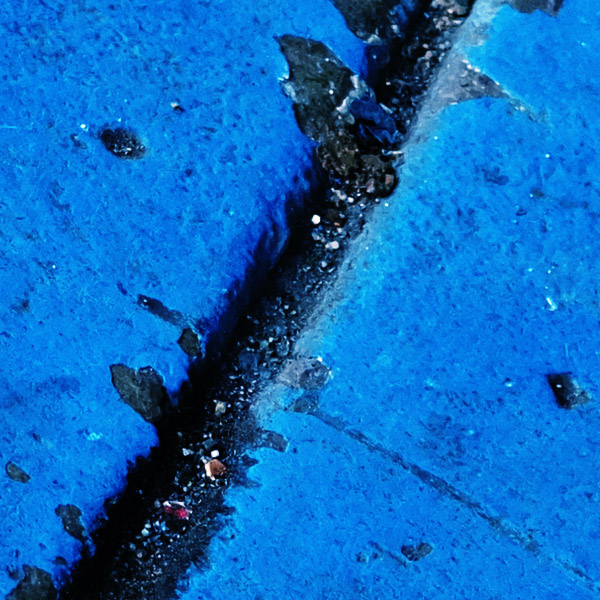 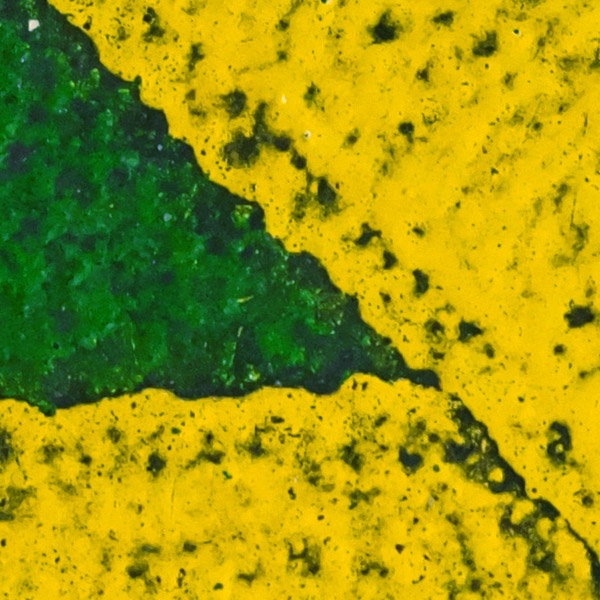 In the end, the GFX100 is not an easy device to summarise. It’s very clearly not intended to compete for the mainstream mirrorless video market. It’s far too expensive; you can get an Ursa Mini 12K for similar money. Sure, there are video features for which we’d have chewed off a limb a few years ago, especially given that vast slab of silicon in the front, but in 2020, 4K at 30p is everyday. It would be nice to see sensor-cropped video options with higher frame rates, which is really an issue of whether the underlying hardware will do it and whether it’s worth spending the time developing firmware for a niche product. In the end, if you want a video camera, there’s more for less elsewhere. The X-T4, for instance.

Compared to the medium format options of just a few years ago, though, the GFX100 feels much more like a big conventional camera with a huge spec, as opposed to a completely different shooting experience as they once were. The video features are fine, but it’s clearly, mainly, a stills camera. In that, its chosen realm, it brooks no compromise. It’s nice to occasionally visit the top of the range, and this is the top of more or less any range. It’s a thoroughbred, a fine art photograher’s camera that’s still very portable and captures detail that most people won’t even know exists until they zoom in on a big monitor.

And sure, if you’re specifically into shallow depth of field in your video work, it’s bigger than an Alexa LF. Keep saying that to yourself.