From passion to live show, how Chez Jigmé works his cooking magic 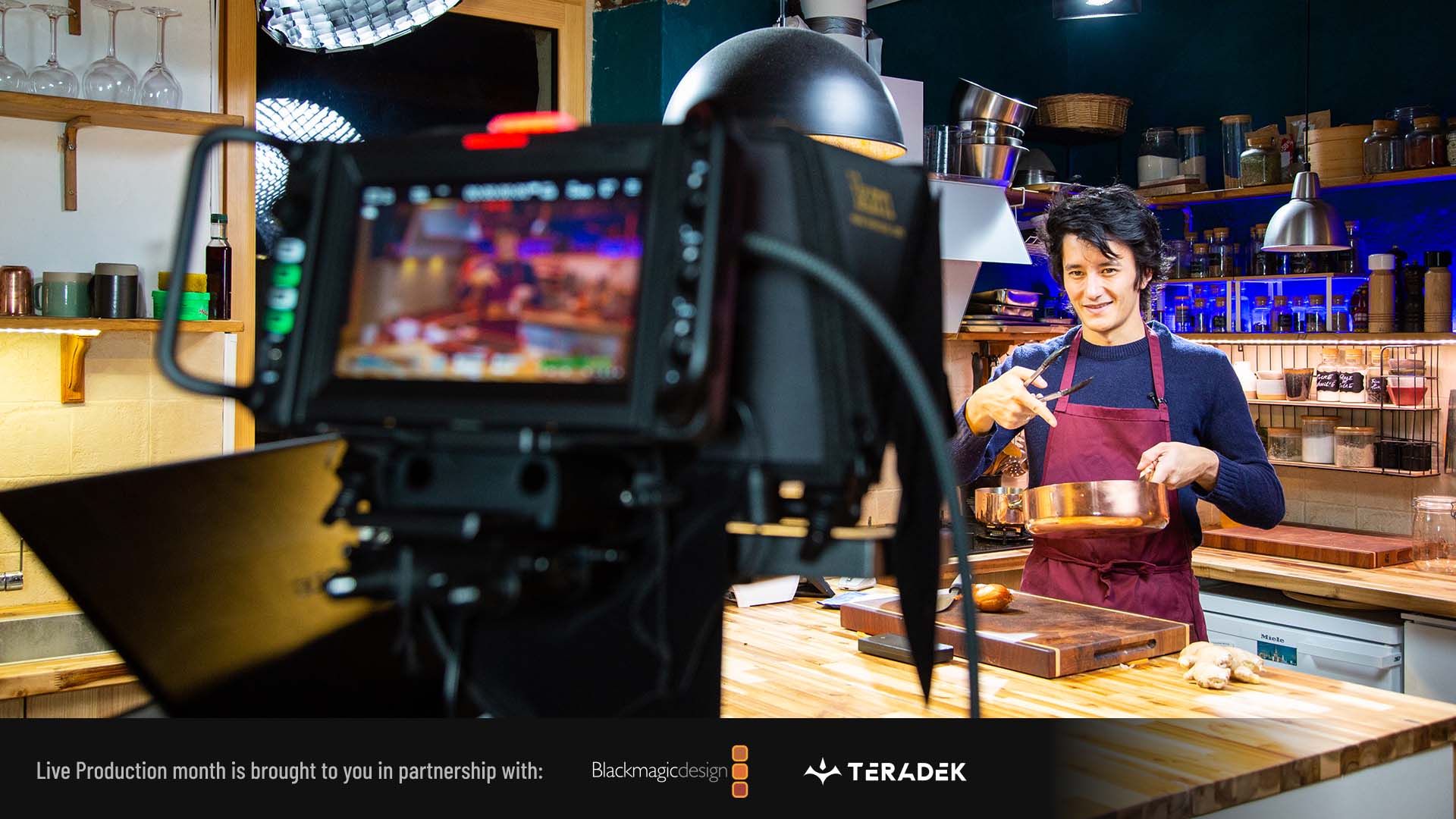 The gear we use are the tools with which we realise a creative vision. This is the story of how one creator turned a passion for cooking into a successful live show, and it's all down to the democratisation of equipment.

Chez Jigmé is a French content maker who has turned his passion for food into a highly successful live-streamed cooking show. While celebrity chefs such as Jamie Oliver and Gordon Ramsay still reach the majority of their audiences through more traditional TV channels, Jigmé has built a substantial audience of his own through online live video. We recently caught up with him to talk about his journey, and how live streaming has transformed the way he reaches viewers.

Jigmé had humble beginnings, "It all started in 2012. At the time I was working at the Apple Store... Before that, I was into photography, but I switched to video as I wanted to make videos online to maybe get a new job. Selling computers was fun, but maybe not fun enough, so I started making comedy videos online for YouTube.

"I guess I couldn't imagine at the time that you could earn money making videos on such a platform. But then it kind of took off. Many subscribers subscribed, and it was a fun adventure."

However, it was cooking that really interested Jigmé, and initially he had plans to open his own restaurant. Not an entirely unreasonable ambition, given that his family has a background in the industry.

Jigmé was taken by the idea of starting a French cooking channel. France is, after all, a country that is inexorably linked to cuisine. At the time nobody was really making high-quality content on the subject, other than the established names, "At the time I remember Jamie Oliver in England. He had his channel on YouTube, and I was like, dammit, that's exactly what I want to do!

"It's nice. It's kind of sexy. You really want to cook when you see those videos. I needed to make this kind of thing in France. So that's how I started. And then two years ago right before lockdown, I switched to live-streaming. I used to stream video games in 2016, but I wanted to do something about cooking. So that's how I started in 2020, maybe two months before the French lockdown."

Jigmé's Twitch channel covers lots of different content, with lots of variety in where the recipes originate from. But it isn't just advanced techniques or complicated food; the channel likes to encourage viewers whether they are beginners or advanced, "I tried to do many things, most of all the everyday cuisine, because that's what everyone needs to live on and can appreciate.  I think there are many things to learn in every kind of cuisine, not just French cuisine. So that's why I want to show subscribers everything about cooking."

The setup that Jigmé uses for his live streams has evolved since he first began, but one thing has remained constant, his use of Blackmagic Design cameras.

"I already had experience with its Pocket Cinema Cameras, and as I was looking for a live-streaming solution, I stumbled upon the first item, its ATEM Mini, and I thought that's exactly what I need. I have three cameras. One main camera, one for the kitchen countertop, and the other one for the gas stove."

However, linking all the equipment up for live-streaming wasn't without its hurdles,

"The first one was cables, because at the time I was living in the city and my kitchen was really, really tiny. At first I used a MacBook Pro. It was hidden in another place, and no one could see it on the stream, but the MacBook was definitely not enough. So I had to switch to my iMac, which was in another room, and I had to extend cables all the way around the flat to get it working.

"So that was the first problem. The second one was dealing with OBS. As I told you back in the day, I used to stream video games, so I was kind of familiar with OBS, but I had to learn it again. The last problem was audio sync issues; that's the worst part of it. But that was OK because I'm a bit of a nerd, so I like finding solutions to problems."

A unique part of Jigmé's setup is the teleprompter, which he uses to communicate with his viewers on Twitch, directly interacting with his audience,

"Yeah, it's fun. It's kind of bulky, but it works and it's kind of free since I bought it six or eight months ago. Instead of showing simple text, it prompts your Twitch chat so you can read and react to your followers' messages by looking at the camera. I think that the connection is much, much nicer, and the interaction with the audience, it's way better." 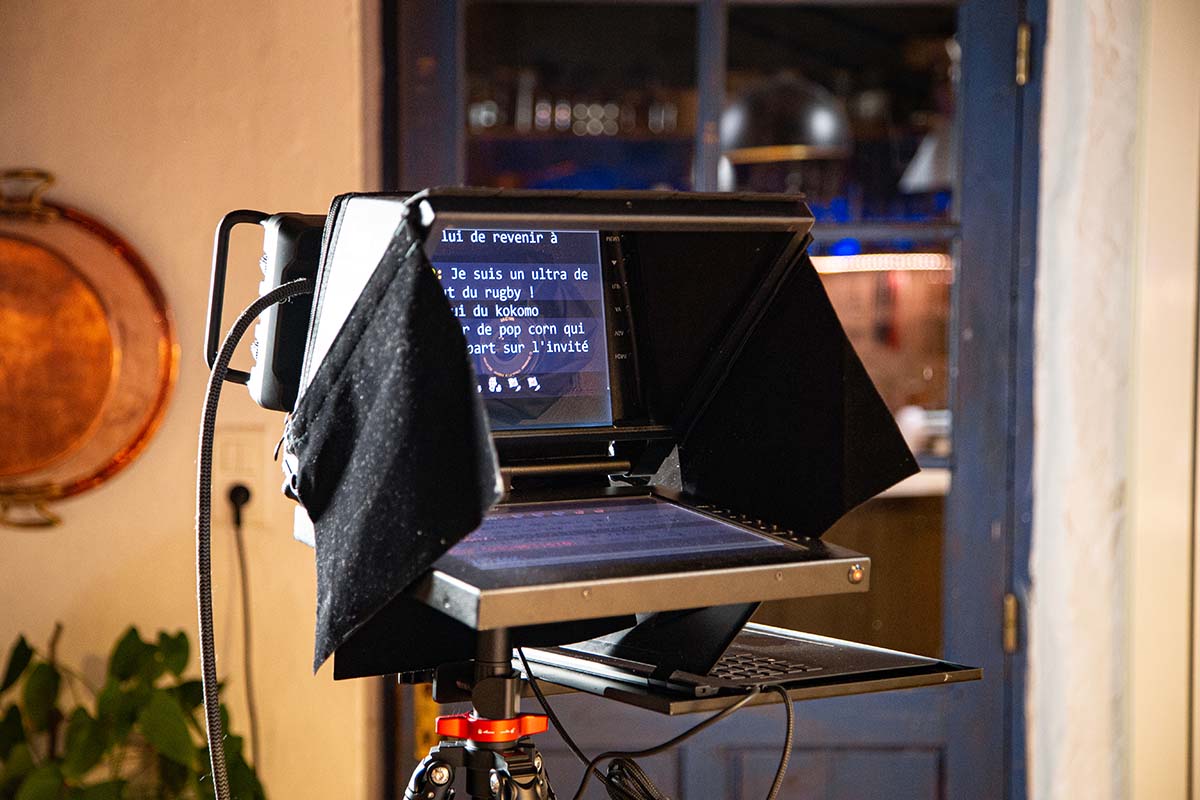 A teleprompter allows Jigmé to interact directly with his audience's questions.

You might think that Jigmé has an assistant on hand to switch all the camera angles during the live stream, but it is all controlled by him. I suggest that he must have magicians hands, since it isn't noticable,

"I'm alone. I'm just by myself. I've hacked IKEA furniture to be like live streaming furniture. Inside there is a Mac Mini M1. There is the ATEM as well, and there are many cables. And actually, the ATEM is connected to a Stream Deck, and that is on the countertop and I switch cameras from the stream deck only.

"The next step will be (a product) from a French company called Middle Things. It released a device called the Middle Remote. It's a joystick with buttons, and you can control every setting of your Blackmagic camera, live. It's exactly what I need to be able to use zoom lenses on the cameras."

A studio for quick deployment

Anyone who has set up a home studio of any kind knows that it can be time consuming to set up. And if you are using a room that isn't a dedicated studio you need to think about how the recording equipment will impact on your living environment. Jigmé thought about this from the start,

"That's one question everyone asks; is that your kitchen, or is it a studio? It's actually my kitchen!

"One important goal I had in mind was OK, I need to build the perfect cooking livestreaming setup, but I'm too lazy, so I just need to do the least amount possible to get it ready. So every light, those are Aputure lights, they are fixed on the ceiling, so they stay there all year long. The overhead shots, those are fixed cameras. The live-streaming furniture is kind of hidden, so I never see it except when I open the door. And for the rest, the only thing only thing that I move is the main camera (a Blackmagic Studio Camera) with the prompter. So that's a Blackmagic Studio Camera and another one is on a DJI gimbal. 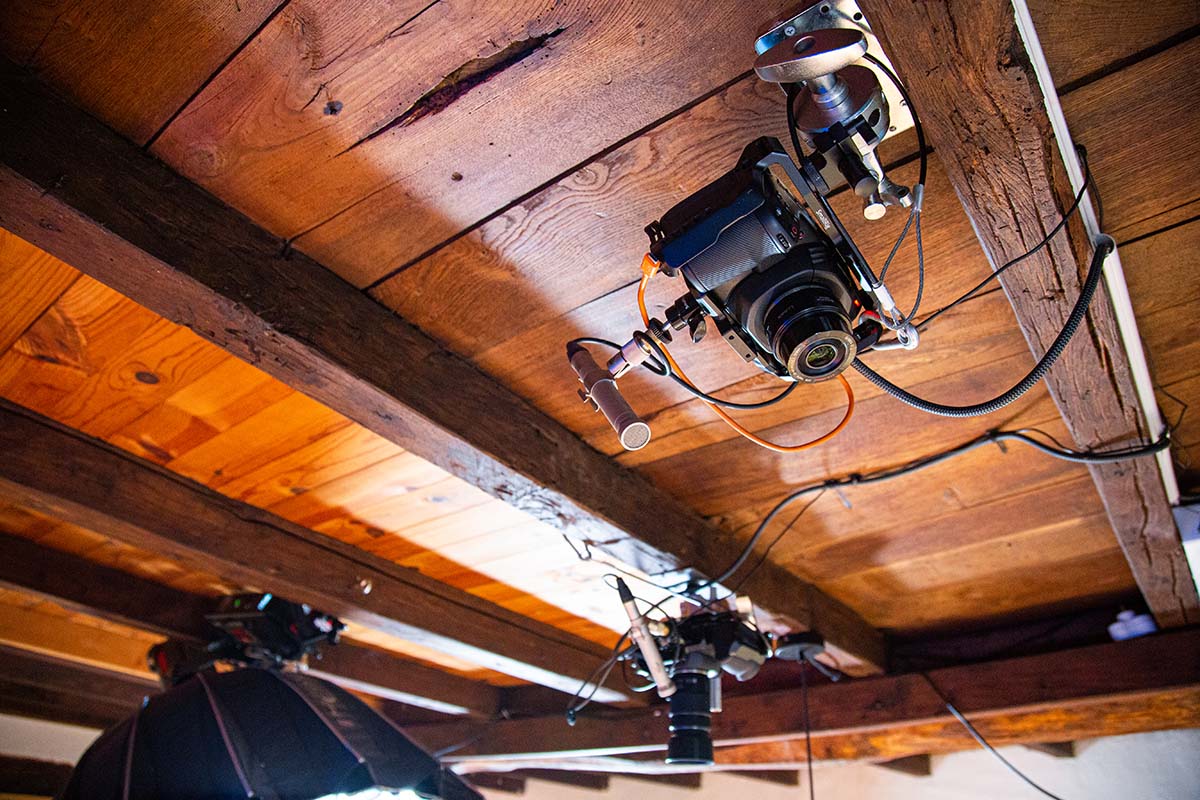 "So I just I spend a lot of time thinking about the perfect solution to be easy, simple and quick."

Many people who may want to start live streaming won't be trained media professionals and presenters. So what was it like learning to both present and focus on the cooking at the same time?

"It's kind of a difficult exercise, and then an important thing to mention is that when you do such a thing, the time it takes to make one recipe stretches. It's like making a 30 minute recipe becomes a one hour show because sometimes you just stop cooking to answer a question. Then it goes on, and then eventually you get back to the recipe, and it's been 15 minutes already. So it's kind of difficult.

And sometimes I made mistakes. I burned a towel. I left one on a panhandle. These kinds of incidents can happen."

It might sound like a daunting prospect to set up a live show, so what kind of advice would he give those people starting out who have never done it before?

"Well, they're going to have to learn about using OBS. It's free. So that I think is the main consideration when using OBS, because it's open source. And you can do so many things with it, so that's the first step. You can use a very simple computer webcam to start live streaming, obviously.

"I think the next advice would be to focus on having very good audio before getting nice video quality. Right? Because there's nothing worse than the live show ruined due to rubbish audio." 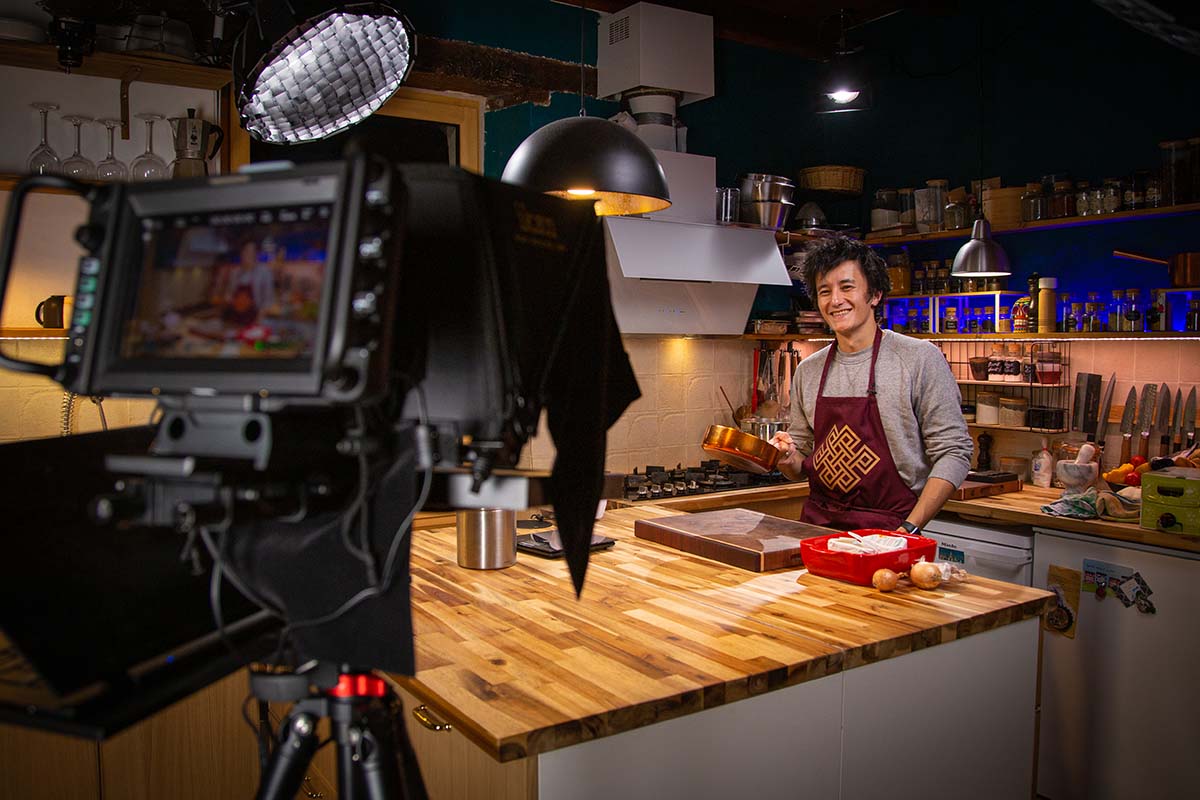 So what's the next step for Jigmé's live streaming ambitions?

"The next step will be inviting guests over. I was thinking about having guests over Zoom first because I've tried it with another French cookery YouTuber having a cooking show as well. And it works kind of nice, but the next step would be inviting people over to my house and cooking live, and that would be really, really amazing. The other step is live-streaming outside because I'm preparing a nice garden for it."

Jigmé's channel is a great example of how you don't need a huge crew or even a dedicated studio to create highly professional looking live broadcasts. His is a story of how the democratisation of video equipment through both accessibility and ease of use has transformed what we have come to expect from online video. It shows that live streaming is the next step for creators to truly engage with their audiences, with new avenues for creativity.