3 minute read
This is not a QD-LED display. Image: Samsung.

Anyone who wants an OLED display can rejoice in the knowledge that there might soon be a new product on the market, raising the possibility of actual competition in a world LG has more or less owned, very profitably, for years. Enter QD-LED.

OLEDs are just the latest in a very (very) long line of technologies designed to create little moving patterns of light which now stretch back more than a hundred years. Not one of them has ever been perfect, and OLED spent a long time looking like one of those technologies that might struggle to make it out of the lab and into the market. Strolling around a consumer electronics store, though, it's be easy to conclude that the home TV industry has been very successful in its campaign to persuade consumers toward products with "LED" in the title.

In that context, it's no great surprise to find yet another acronym, QD-LED, creeping into use, as was brought up at the Hollywood Professional Association's recent Tech Retreat. TVs referred to by terms which are almost "OLED" abound; Samsung has long used QLED, referring to the use of quantum-dot phosphors to convert blue light to a combined white in a backlight for an otherwise conventional TFT-LCD display. The visual similarity of the letter Q to the letter O is, we can only assume, a happy coincidence.

At least in consumer displays, the fight got nasty. A while ago, LG ran what's been called an "attack campaign" called "Question the Q," presumably intended to remind consumers that there are some fundamental differences between its own OLED technology (which is not a TFT-LCD with an LED backlight) and the QLED sold by Samsung (which is). Given that LG had then for some time been the only manufacturer of OLED video panels for consumer applications, it's hard to object to the company's desire to publicise its hard work.

Sony famously gave up on manufacturing ultra-high-output OLED panels for its professional reference displays, although they weren't quite the same technology as what LG sells to the consumer market. Consumer OLEDs have suffered burn-in, but there's quite some financial distance between tattooing a home TV with the ghost of a video game ammo counter, and finding that the left and rightmost few columns of Sony's big grading displays, columns that aren't used for some aspect ratios, now look bluer than the middle when the time comes to use them all.

With some irony, Sony was actually among the first companies to show an OLED. A little eleven-inch, 960 by 540 panel started showing up at NAB in the mid-2000s. It would eventually see production as the XEL-1 television, a decided antitriumph of staggering expense, low resolution,  and feeble brightness; truly, the world's smallest big-screen TV. Apparently unaware of the maxim that progress requires progression, Sony kept the XEL-1 on its books until 2010, though it probably shipped well under 100,000 in total. Whether it intended to keep a finger in the pie of OLED manufacturing for the consumer market is debatable; it certainly tried to do so for industry applications, but, as we've seen, eventually threw in the towel.

All of which made Samsung look downright ambitious when, in 2019, the company announced that it was repurposing some its Tangjeong plant to produce OLEDs. Exactly how much of the manufacturing process for TFT-LCD displays is relevant to OLEDs (both use thin film transistors, for instance) depends on the details, though possibly "repurpose" might mean "demolish to ground level and rebuild."

Strewn as this situation is with rampaging profit motives, a sufficiently furrow-browed and cynical observer* might harbour suspicions that QD-LED looks like another attempt to create something that sells like OLED without having to go to the lengths of actually making an OLED. What Samsung is doing, though, is fairly convincing: QD-LED is a self-illuminating pixel technology like every OLED, meaning that each individual pixel can be switched off and achieve that enticing absolute-zero black level. 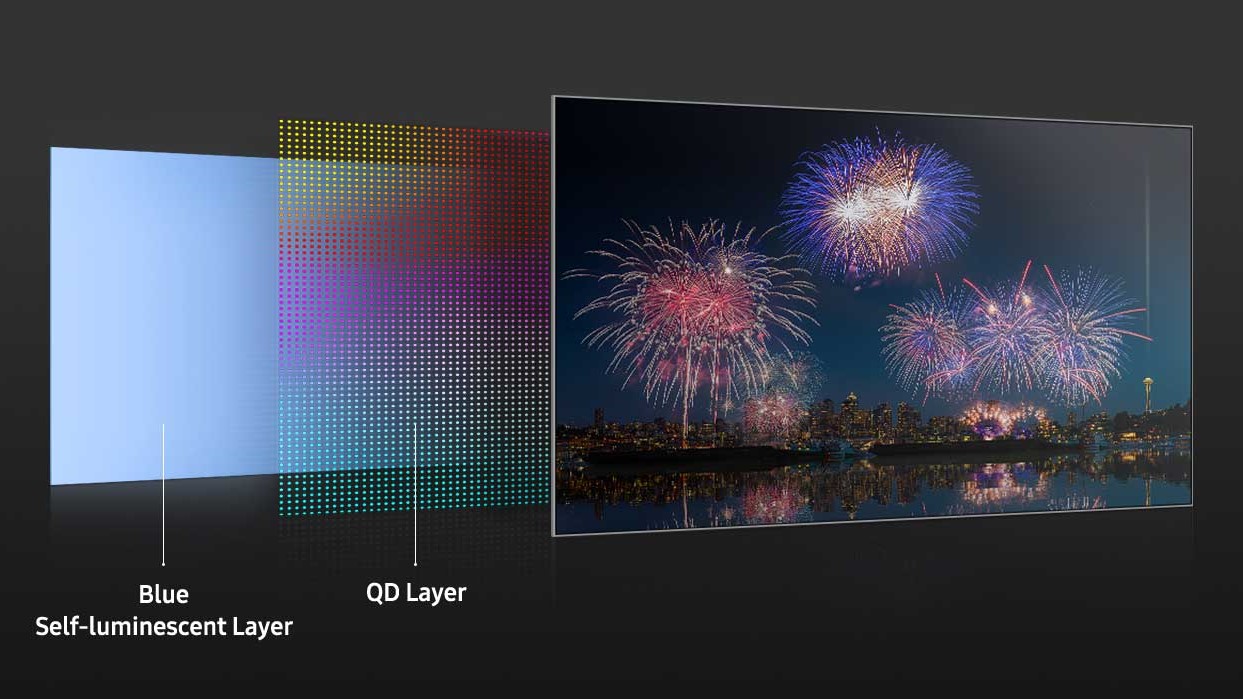 The difference is that in a QD-LED display, all the pixels are blue, and quantum dot phosphors, of which we have previously spoken, are used to convert the blue light to red and green as necessary. That contrasts (ha) with existing OLEDs which use other approaches to create green and red light. The quantum dot technique is, without diving deep into the physics of it, potentially brighter than current OLED tech. Samsung is presumably leveraging its background in quantum dot technologies here; the Q in QLED is a reference to the same thing.

The time since 2019 has been interesting, so it's perhaps forgivable that Samsung and Sony (which is apparently a customer for Samsung panels) remain poised on the brink of actually spawning widely-available QD-LED displays. Samsung, in particular, is still pushing the brightness benefits of TFT-LCD on its own site, which would be odd behaviour for an organisation imminently intending to launch a better technology.

Finally, a note for any grading specialist who's sprinting for the comment section with one of those animated vein symbols developing. No, Samsung likely does not have a precision reference display as one of its principal motivations for pursuing this technology, just like the people involved in mid-to-late 1990s video game hardware development weren't doing it in order to spare post production houses from purchasing equipment that cost more than a nice house in a good part of town. They did that, though. And even in the short to medium term, having pictures in people's lounges that look more like they did in the grade is no bad thing.

So, let's all look forward to better TVs and whatever might arise from that - and in the meantime, recognise that the much bigger hurdle to a more accurate home viewing experience isn't actually developing better display panels, it's encouraging the wider adoption of creator mode.