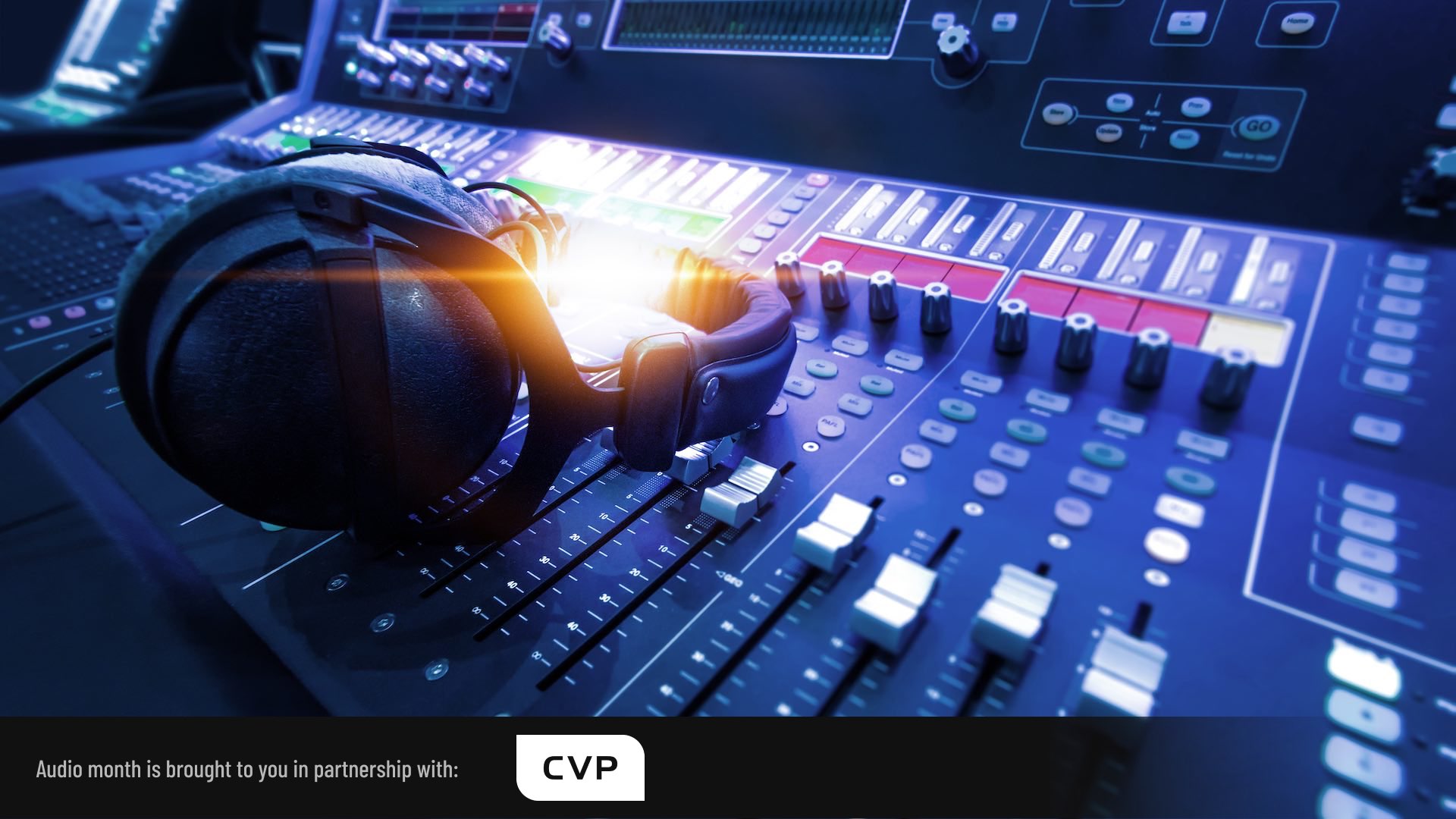 David Shapton leans into decades of experience in digital audio to share some hard won knowledge regarding what works and what doesn’t.

Digital audio transformed every aspect of recording, processing and playing back sound. In many ways, it led the way for digital video. It's been around since the Eighties, and the theory dates back to the first half of the 20th Century.

I was fortunate to have been introduced to digital audio practically through a series of lucky coincidences. My school friend worked for a modem company. These had Digital Signal Processing (DSP) chips to help cancel out the "echoes" that would come down a telephone line and mess up the data. We were both musicians, and he said we could make a mixing desk using these chips.

Somehow, and ninety-eight per cent through my friend's streak of genius, we built a prototype. While doing this, I learned a lot about DSP and was fortunate to have friends at Neve doing intense R&D in digital audio mixing. It also helped that the bass player in my band had a PhD in signal processing and was willing and able to tutor me in digital filter theory and other exotic stuff that - pre-internet - you probably couldn't learn without attending a university course. (My bass player friend is now the General Manager of a Quantum Computing company, and I would expect nothing less).

CD audio has had a bad rap in recent years, perhaps because there are now higher resolution methods to record audio. But while it's probably true that "more is better", it's more nuanced than that.

CDs are actually capable of excellent audio performance. However, I have yet to meet many people who can tell the difference between 44.1, 48, and even 96Hz sample rates. It's not surprising: CD audio has a maximum dynamic range of 96dB - that compares to around 72 dB for vinyl. No adult can hear beyond the theoretical frequency cap of a CD, which is just over 20kHz.

It's not that 96dB is too little for playback; it's not always enough for recording.

Imagine that you're trying to record a big band onto a 16-bit medium. You'd better make sure that none of your peaks exceeds 16 bits. Digital audio is totally unforgiving. In a 16-bit system, there simply are no numbers above what can be expressed by a string of sixteen ones and zeros. Unfortunately, nothing doesn't sound like nothing, although it could if the system detects the error and mutes. What's equally likely is that you'll simply get a horrible, raspy distortion or, worse, full-scale noise. In an analogue system, you will probably get a gentle roll-off.

It's far better to record into 24 bits. It's not that you need 24 bits worth of dynamic range, but it gives you headroom to deal with unexpected peaks. It eliminates the worry that you'll ruin the whole recording because of a sudden loud noise. When you're done with recording (and mixing, mastering etc.), it's perfectly OK to carefully reduce the recording to 16 bits - that's unless you absolutely need to have a dynamic range that can cope with a spec of dust settling on a sofa to a pneumatic drill in your bedroom.

Just to round out this section: you can make incredible recordings in 16-bit resolution. But you might have to rehearse whatever you're recording to know in advance what the maximum levels are likely to be and then adjust accordingly. If you don't rehearse like this - and often you can't! - you'll have to "waste" bits by setting your levels around a 12-bit maximum instead. That, though, will proportionately increase quantisation noise and lower the overall quality of the recording.

And, incredibly, you can record into 32-bit floating point resolution these days. There are a few tricks equipment designers use to make it work (like having multiple A/D converters per channel, with offset gains), but, basically, what a great time to be alive!

2. The lower the level, the worse the quality

Digital recording is excellent, but it can't escape the laws of physics. So let's stick with 16 bits for now. That gives you 65,536 levels to describe the amplitude of a waveform slice - a sample, in other words. That's pretty good. But at low levels, you might only have 8, 6 or even 4 bits to describe the sound. It's a problem, but it needn't be an issue. It really matters when a track fades out to almost nothing or when a grand piano note decays over thirty seconds or so. So the "tail" of the note will eventually only be heard courtesy of a few bits of resolution. It's the same effect as when you see a blue sky in a video with 8-bit quantisation: you can see the steps between the very subtly different shades of blue.

The reason it's not usually a problem is that to hear that distortion, you'd have to turn the volume up so high that if a loud note came along, it would deafen you. In other words, it would never be audible in typical listening conditions. Where it can cause problems is if the original recording was too low. If you make a copy, it will contain the quantisation distortion from the under-recorded original, and if you're mixing multiple tracks together, the result is cumulative.

Just as if you add a tiny bit of random noise to an 8-bit image, it can "smooth out" the contours between adjacent colours. You can do the same with digital audio. This so-called "dither" masks the quantisation distortion by randomising it at the very lowest levels.

Of course, analogue isn't immune from noise caused by low levels, either: just digital is arguably less forgiving, even though it has the potential to make the best recordings when the levels are carefully chosen.

3. The importance of keeping within the DR window

When you start to record digital audio — and of course, that's everybody these days — it's tempting to think that you have a wide range of levels to play with. And with 24-bit recording and above, that's true. But there are still some analogue factors to account for. Primary amongst these is the noise floor. Digital might be silky quiet, but microphones (electric guitars, synthesisers, etc) typically have analogue outputs. You can't get away from it: there will be a noise floor, using up some of your dynamic range. So by the time you've factored that in and then allowed some headroom for unexpected peaks, you're left with something quite a bit less than the full dynamic range you might have expected.

Dynamic range compression and limiting are the answer. But it doesn't make sense to do these digitally because that would mean the compression coming after the problem - where "the problem" is the limited dynamic range window to get through into the digital domain.

The answer is simple: do your compression on the analogue side. Many digital recorders come with some sort of compression or limiting. Analogue limiting can restrain unexpected peaks so that they don't distort and still fit into the "window".

4. Cables can cause jitter

This might seem a bit random or left-field, but cables can distort digital audio. Sceptics amongst you might raise your eyebrows at this, but it's true in some circumstances, and the reason is jitter. Jitter is where the regular spacing of audio samples becomes irregular. In cables, it's caused by excess capacitance or other factors in the make-up of cables that distort the nice square pulses into something that can look like a mutant sine wave. It's a natural, analogue effect, but at some point, the receiver has to decide at which level this slippery-sided waveform represents a one or a zero. If the threshold is offset towards the top or the bottom of the waveform, the result will be inaccurate timing and distortion.

It's not a huge problem these days. Most digital gear re-clocks incoming digital audio to remove jitter, but it does explain (and I've seen this myself) that changing cables can improve the sound of digital audio, impossible though it should be.

But I'm mentioning this more for curiosity value than the expectation you'll experience this yourself. Hopefully...

5. How to hear single-bit errors

It's actually tough to hear a single, dropped bit. Even if there are quite a few, you might not notice them overtly. But I've found that digital audio with missing samples can sound "uncomfortable". It's hard to describe, but it's almost like a "pressure" on your ear.

If you suspect a problem with your digital audio setup, play a single sine-wave tone at around 5kHz. Watch out for the level - you don't want to damage anything. Listen to the tone. Is it smooth and even? If not, if you can hear slight roughness, then you're probably losing samples. Hearing a dropped sample against a constant tone is much easier than with a backdrop of music or speech.

Well, that's a chaotic dash through some randomly-selected digital audio phenomena. Digital audio is often very similar to analogue - especially because a high-spec digital audio system can record analogy phenomena better than any analogue recording device. But often, you have to think differently with digital audio. And it's worth it. Digital recording is the single biggest ever leap in audio recording technology.