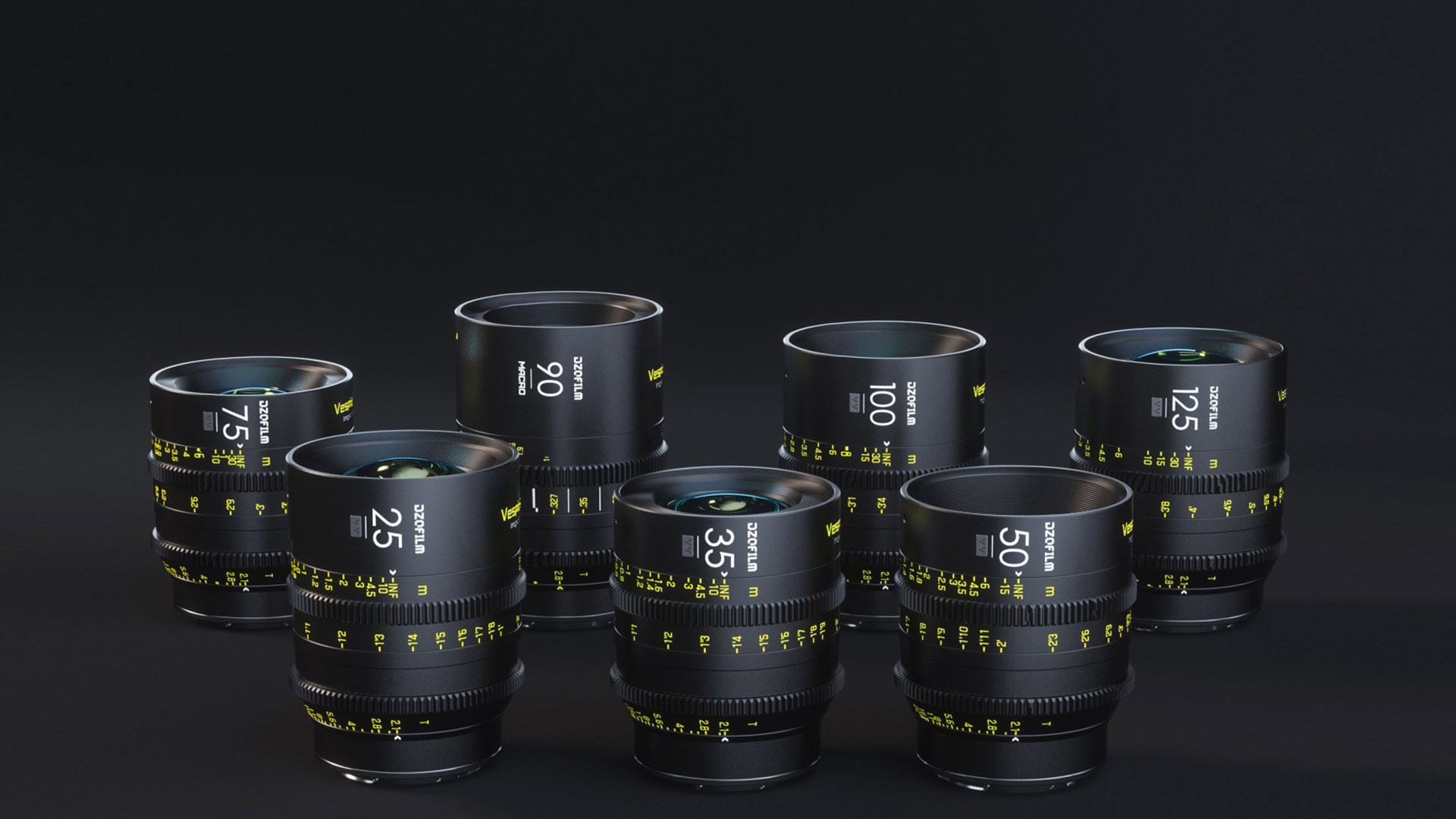 DZOFILM has launched a new set of primes that, on paper at least, would appear to take on the big boys at an incredibly attractive price.

Someone asked a question recently about why cinema lenses are so huge. There are, of course, good reasons in optical physics why a 50mm f/2 prime can’t be less than slightly-more-than-25mm across, and if we want all of the lenses in a set to be the same size and we want them all to have the same minimum stop, then they’re all going to be about as wide as the longest focal length.

Still, it’s not always clear why a set that tops out at 85mm and doesn’t go below f/2 has a unified filter diameter of – say – 105mm, especially in comparison to some popular sets of stills primes which have entirely decent performance, and which you could easily lose in a cup of coffee.

This seems to be the thinking behind DZOFILM’s Vespid series. We could go on about how they’re of unified diameter and with unified focus and iris gear positions, but that’s hardly a rare feature these days. We could drop a unit of currency in the swear box and use the word “bokeh” in connection with the 16-blade iris.

That’s not to be in any sense dismissive of these features, which do represent a lot of engineering effort, but what’s really special about the Vespid lenses is that they have these features and yet they’re small, handy, compact. They vary in length somewhat, but even the 90mm macro is only 800 grams and under 120mm in length, and they all have 77mm filter threads. Compare the Cooke S7/i 90mm macro, at more than three times the weight and almost a third longer, while being fractionally slower.

But wait, I hear you cry; the S7 series are full-frame plus lenses, in Cooke’s nomenclature. Surely, the compact Vespids don’t cover big chips. Well, Cooke describes the S7s as covering a 46.31mm image circle, which is pretty clearly a reference to the estate-sized chips in some of Red’s 8K offerings. The Vespid primes are described, perhaps with a note of slight nose-thumbing, as 46.5mm coverage; yes, you can use them to shoot full frame, and they’re not slow. All except the 90 macro are T2.1, and the 90 only slips to 2.8.

Anyone wondering how this has been achieved might conclude that the Vespids rely on a short flange focal distance mount; are they available only in micro four-thirds or Sony E? It’s a reasonable idea; the Sirui anamorphic 50mm we reviewed has a shockingly good price-performance ratio, but it won’t ever fit an EF or PL mount cameras. Certainly, this sort of thing makes lens design easier, but actually not in the case of the Vespid primes, which are in fact currently being promoted only in EF and PL mount variants.

Of course, being fast, compact, high coverage and widely compatible, they must be expensive. Well, price is always a matter of perspective, and US$1100 a pop is a lot compared to some Nikon AIs from eBay, but even the 90 macro, which lists for $1500, is, let’s face it, quite a lot less than any lens from one of the big names. Cooke’s similarly-specified piece of glass costs twenty thousand pounds here in blighty; work that out in dollars if you feel the need for a direct comparison.

We don’t know what the pictures look like, yet, so all this comparison with the 800-pound gorilla of lens manufacturing might be a bit premature. If they make everyone look purple, that’ll be a problem. Working on the fairly safe assumption that they don’t, we’ll look forward to getting a set on demo.