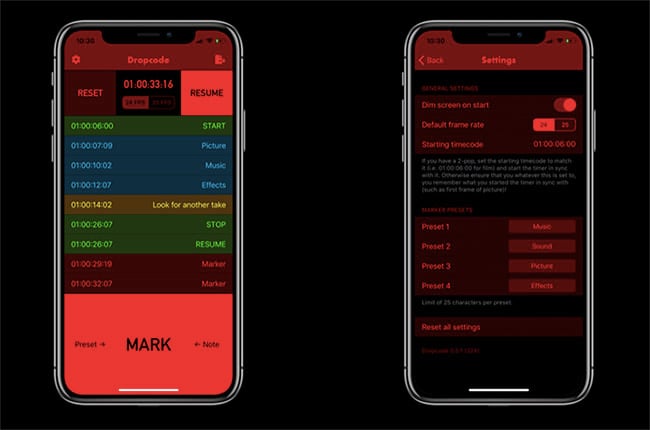 When a director, producer and editor screen a cut, whether it's a movie or corporate video project, it's important to take quality notes. But one of the issues that often pops up is having to look down to take those notes, often in the dark. One enterprising filmmaker came up with an idea to take more efficient, timecode-based notes on his iOS device, and Dropcode was born.

"As a director in post-production on my first feature, I was getting tired of scribbling notes in the dark that I couldn't decipher afterwards," explained filmmaker Stefan Kubicki. "So my editor Shayar Bhansali and I came up with the idea for Dropcode."

Dropcode originated as a way for Kubicki to keep his eyes on the screen as he watched different cuts of his film while taking notes. The app is for iOS devices, and allows you to drop markers that line up with the timecode of the project.

"There were some timecode note-taking solutions out there, but we couldn't find anything that really did what we wanted," said Kubicki. "Talking with other working editors in Hollywood, we found a universal desire for something like this. So we decided to build it."

Allowing filmmakers to drop timecode markers while watching a cut, and even short notes can be added in easily, all while staying focused on the screen. The app is optimized for darkened screening rooms, and you can set the frame rate to 24 or 25 frames per second. The markers are synced to the cut's timecode, so you don't have to worry about which note and marker goes where.

From there, Dropcode exports the markers and notes from your iOS device, which can then be imported into Avid Media Composer (the industry standard in Hollywood) or DaVinci Resolve as timeline markers. From there, editors can quickly make changes based on the notes, saving time versus trying to read notes likely taken in shorthand.

The app works great for directors, producers and editors screening a cut together, or those who are working remotely.

Kubicki says they're constantly working on Dropcode, and looking into adding support for other NLEs, plus support for Android devices. There is mention in their FAQ of possibly adding in 29.97 fps support.

Dropcode costs $7.99, and is available now on the iOS App Store. Find out more information, plus read the FAQ at Gravity Assist's website.