There once was a time when processing your rushes required a building. Since then we've seen it scale down to a room, then a laptop, and then a laptop faster. Somewhere near the current leading edge of the ability to do more or less all of post production out of a backpack is Dell's XPS range.

The machine I'm looking at here is the 17" in a configuration selling for £2699 including VAT. That 17-inch display is not 16:9, but 16:10. Desktop monitors that shape have become less common, but it makes more difference than the numbers suggest; pleasantly roomy in general and especially for video work with 16:9 images. This one is 3840 by 2400; there is a less expensive HD option. 500 nits means no HDR, but it's enough for reasonable daylight readability. This Core i7-11800H is the least-expensive option, running at up to 4.6GHz. The other two options are i9s, although while they can offer higher core count Dell builds the current XPS 17 only with 8-core chips up to 5GHz. 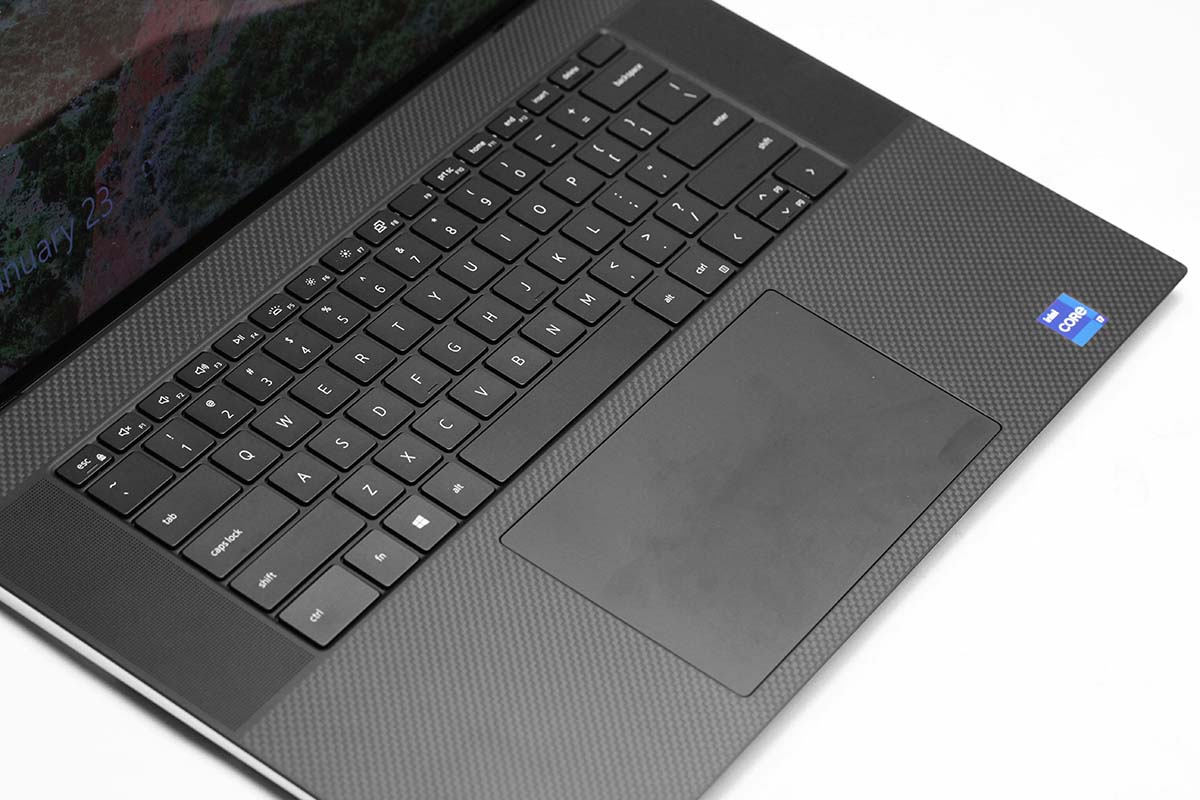 There is 1TB of storage, which might feel a little tight when using the internal flash as a bridging store for offloads and transcodes. Some camera cards are bigger than that, so one of the larger options, up to 4TB, might be a sensible upgrade. Like all modern storage it's blindingly fast, achieving 3.5GB/second on sequential reads. Likewise, the 16GB of RAM might strike some as slightly unspacious, but it's upgradeable.

The star of the show is, of course, Nvidia's RTX 3060, based on the Ampere microarchitecture. It includes updated generations of the ray tracing hardware launched in the Turing series and what the company calls Tensor cores, which are widely associated with machine learning and have been used to implement some fairly convincing denoising. The 3050 option has significantly fewer CUDA cores (2048 over 3840) and clocks slightly slower, although the big difference is that the 3050 comes with 4GB rather than 6GB of RAM. Given we'd really rather have several times that, Resolve enthusiasts might decide that while the 3050 option saves 10W of power and £200, nobody's going to buy the Ferrari with the small engine. 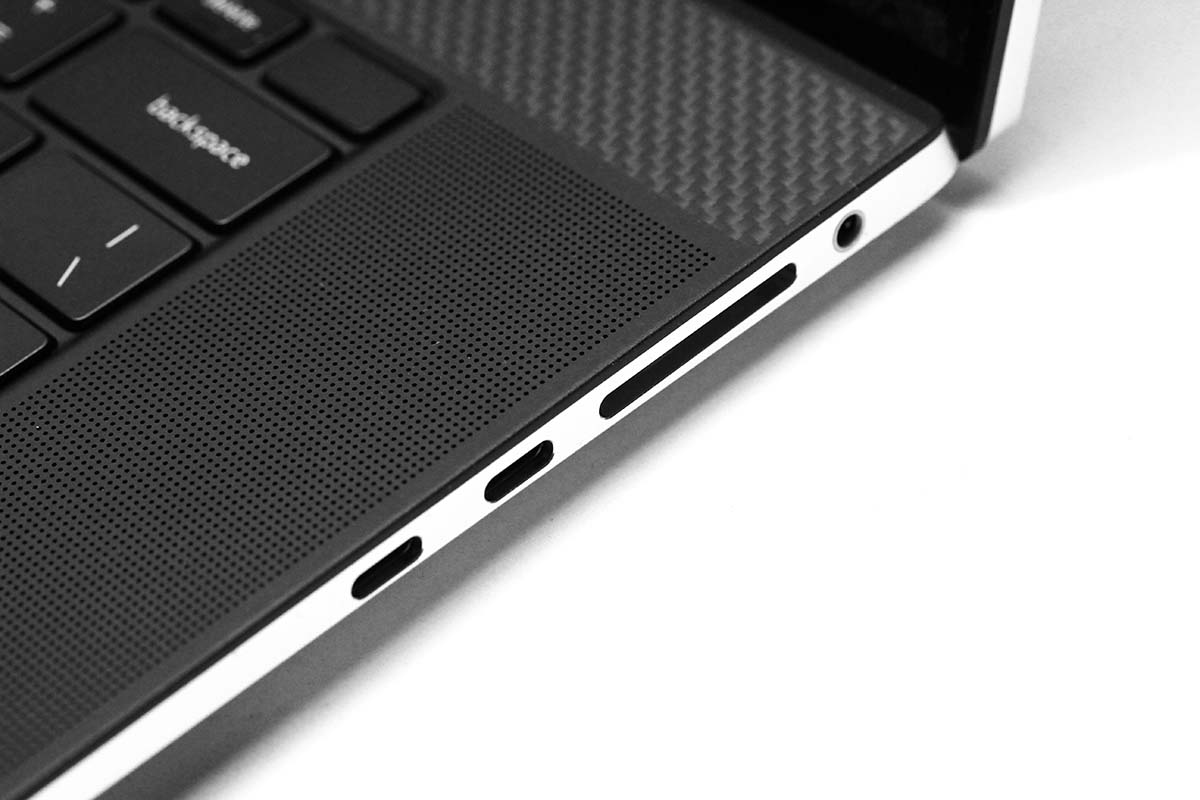 Four Thunderbolt, one SD card, and a headphone jack. And that is it.

So it's a big, scary laptop, although in a physical sense it really isn't. The XPS 17 is a svelte little number, barely larger in plan than that generous display requires and under 20mm thick. In a tidy metallic finish, one that a daring commentator might even describe as space grey, it's pretty clear who this is aimed at. Inside, the dark theme is less mac-like, and the keyboard is shockingly good for such a short-travel option.

If there's a flaw in the spec is that there's four Thunderbolt ports, an SD card slot and a headphone jack. There's no USB-A or anywhere to connect an external display without connecting the supplied converter. Even Apple still includes HDMI. It all makes for attractive industrial design, but it feels a little too soon. The adaptor dangles unappealingly out the side, disturbing those sleek lines more severely than just including the ports would have, and begging loss and breakage.

Reviewing performance is tricky because there's an infinite variety of applications. Clearly a lot of work has been done on compatibility with software like Resolve and Blender. Nvidia refers to the XPS 17 as part of its Studio range, qualifying it to run drivers specifically targeted at productivity. Whether we want productivity to be in the same situation as games, where drivers are endlessly tweaked to squeeze out the last corpuscle of performance on a per-application basis, is another matter; happily, it's all fairly automatic as drivers are downloaded and installed with no user involvement beyond approving things (so it isn't forced upon us in the middle of a project). 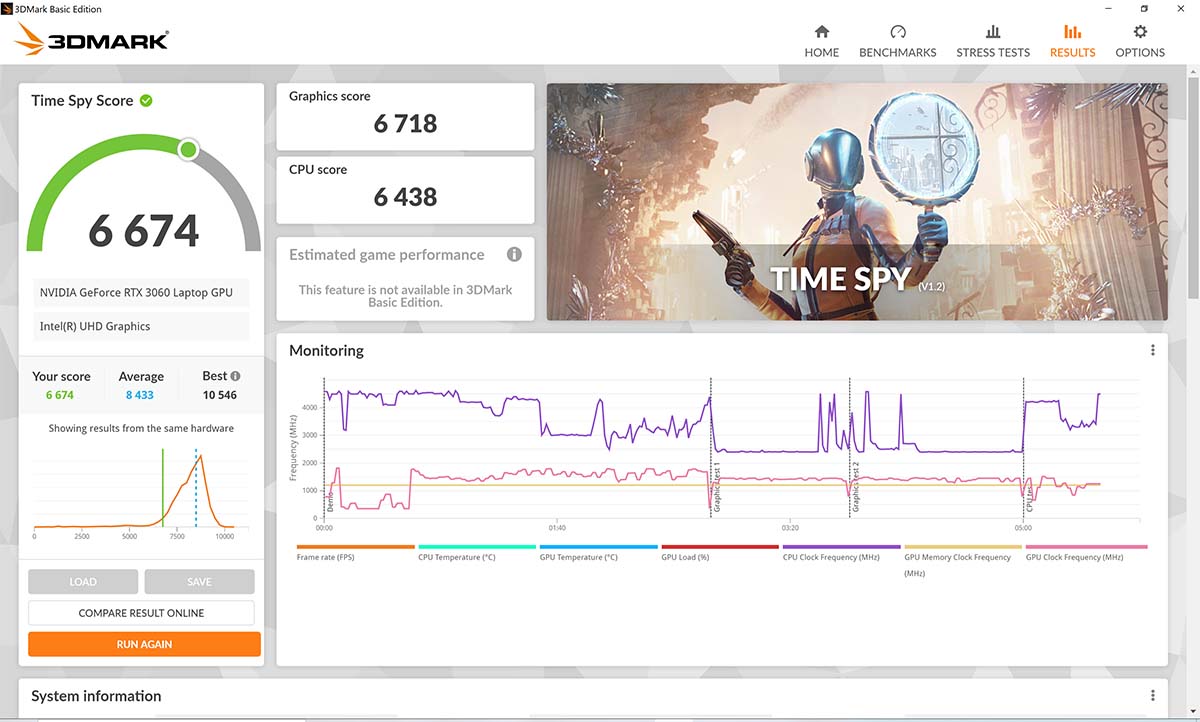 The 3DMark realtime graphics benchmark gives the machine a graphics score of 6718 and a CPU score of 6438. While the overall score of 6674 might seem a little disappointing in the context of an average of 8433 for all scores, it's important to remember that this will be based largely on the cohort who are actually likely to run the Time Spy test, which is heavily biased toward anyone who has just bought a very high powered, very expensive enthusiast-grade desktop gaming rig with a PCIe GPU and no concern over power consumption. Mobile GPUs are necessarily somewhat cut down and the XPS, as a laptop, mind you, holds its own well. 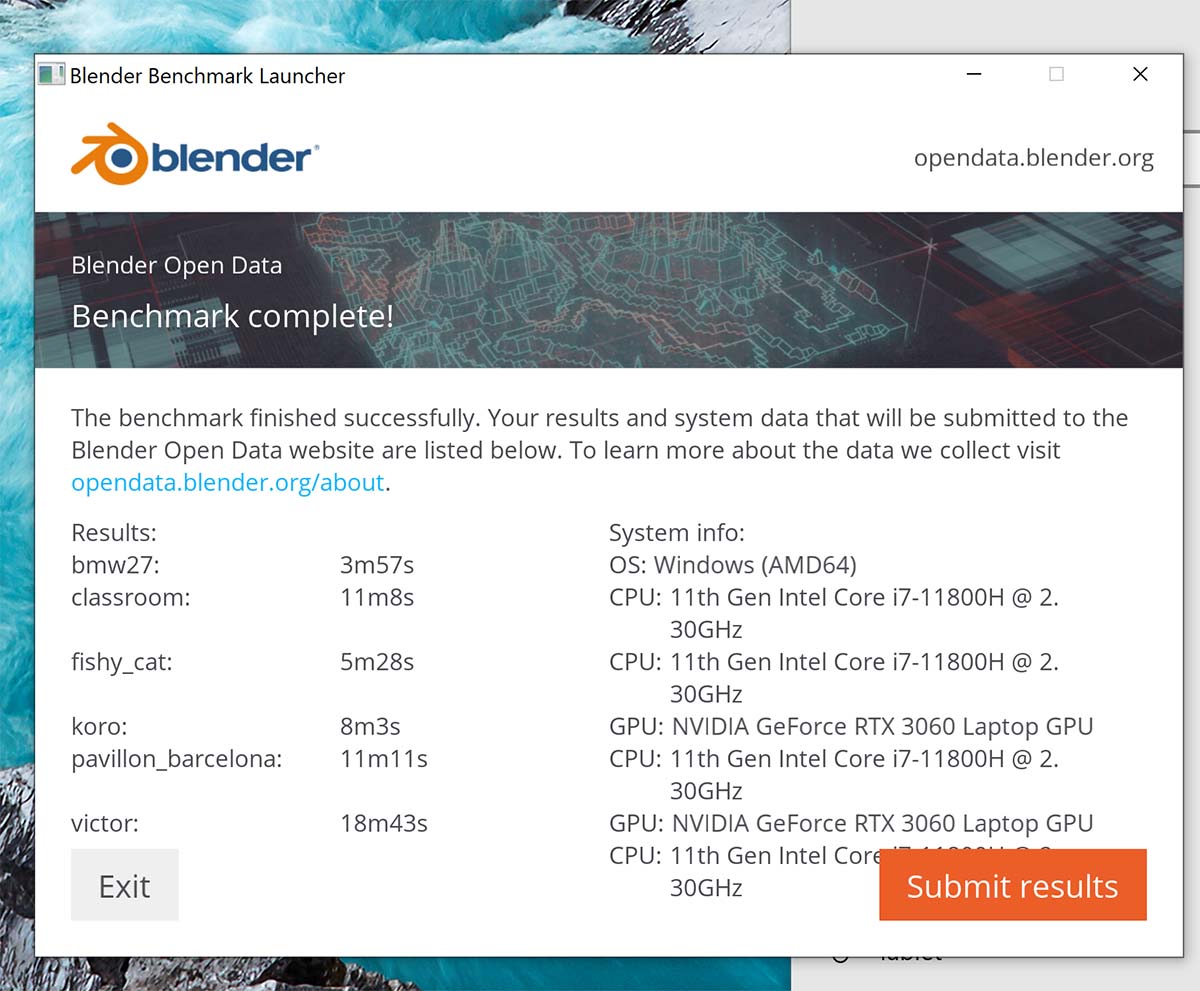 Under Blender's CPU-targeted "bmw27" benchmark, the XPS competes with 8-core Ryzen 7s, as we'd expect. It renders the difficult "victor" scene in 18:43, which is likely to be VRAM limited. Big plug-in 3090s with 16GB of memory will do better here. In Resolve Studio 17.3.1, the laptop scores a highly respectable 950 on the PugetBench benchmark distributed by workstation integrators Puget Systems. This puts it well into the upper third of all results, and again, that includes big gaming rigs with full-fat 3090s built around Asus ROG or Gigabyte Aorus series motherboards which can have an amazing price-performance ratio. 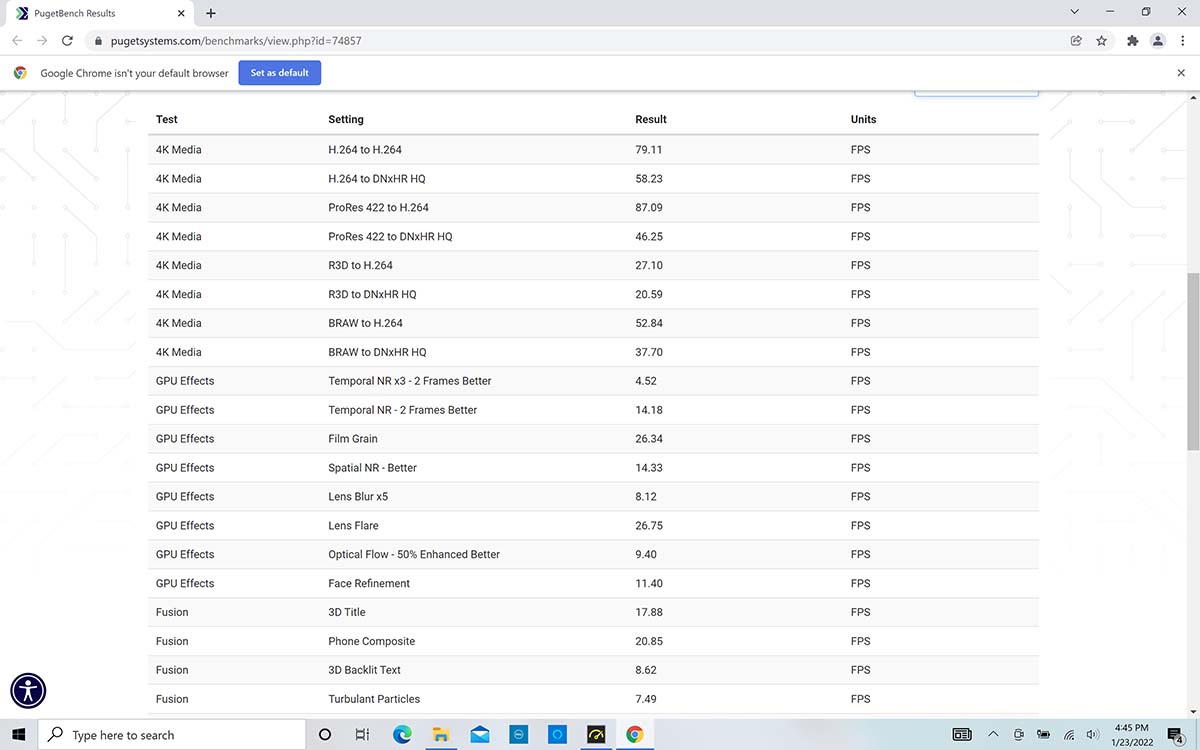 The intention of this machine to go after Apple could hardly be clearer, and this is the huge, trumpeting, giant-betusked elephant in the room: no Windows laptop manufacturer has access to anything like Apple's M1 SOC. That seems likely to change, whether by Intel's hand or someone else's, but right now, this is where we are. It's a mistake to assume M1 will automatically win every contest. Tests suggest that some models are faster than the 11800H on single-threaded workloads and slower on multi-threaded; i9s should open a larger lead. 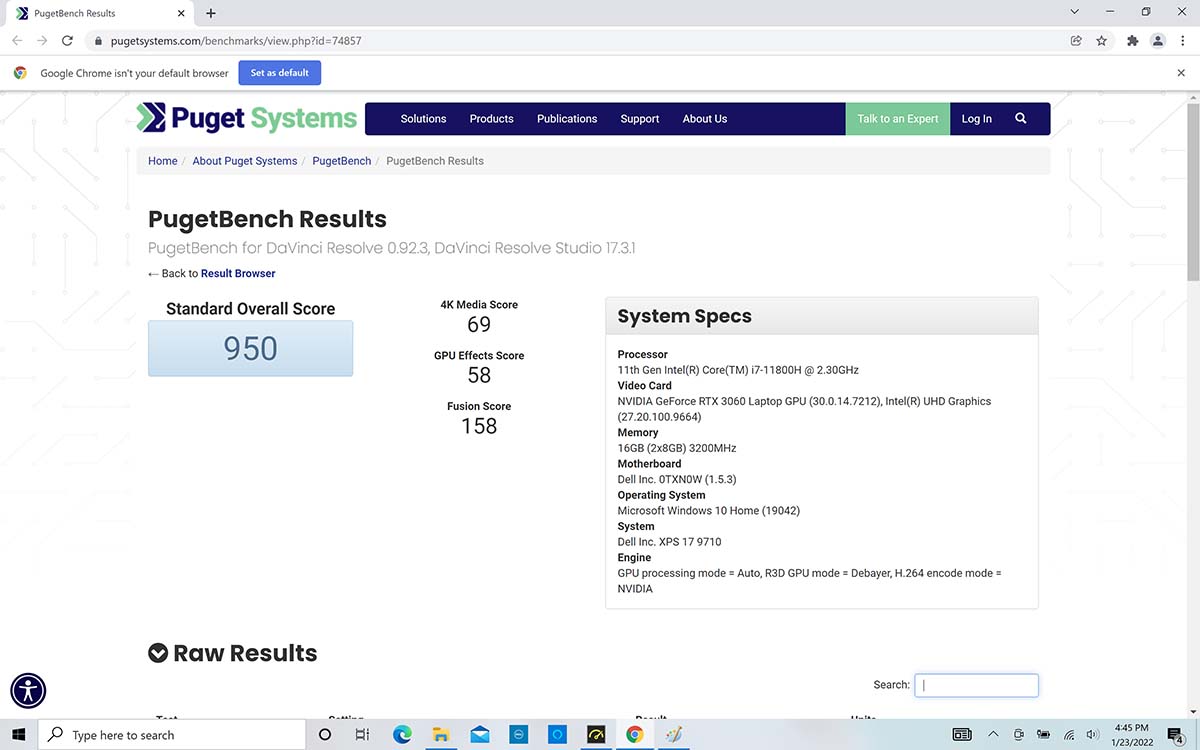 The GPU comparison is complicated because the hardware differs significantly. Power consumption is the where M1 wins. While the XPS has long legs for such a powerful beast - seven plus hours, depending what you're doing with it - it's never going to outlast a comparable Macbook. At this specification, the XPS is a shade spendier than the midrange Macbook Pro 16, though not unreasonably, given the more powerful GPU, upgradeability, and the larger, higher resolution display.

It's hard to knock the pricing, though, because the XPS 17 really is that nicely put together. Many people will feel more comfortable with the 32GB RAM option, although one of the singular niceties is that many aspects of the XPS are upgradeable with plug-in, off-the-shelf parts. That's unusual in a sleek, minimalistic modern machine.

As so often it's probably possible to get something less expensive in a machine targeting games, but it certainly won't be this - what's the word - slick? Yes, it's slick. Very slick.