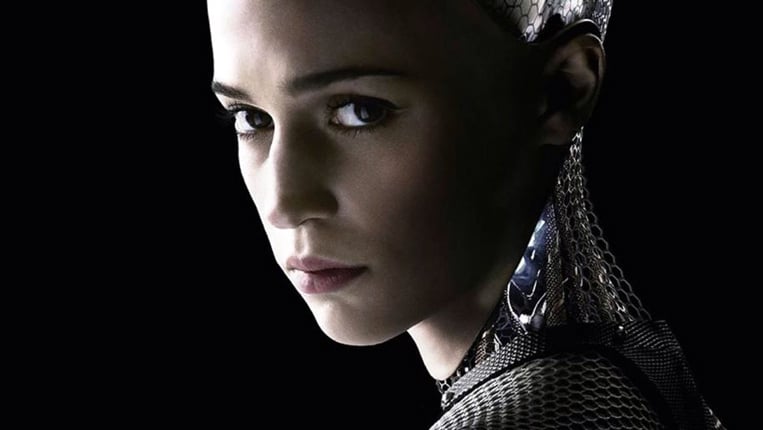 The visual effects take centre stage in Alex Garland's examination of what it means to be human but, as Kevin Hilton explains, Glenn Freemantle's sound design connects the audience to reality while giving the film's artificial life form an aural signature.

Sounds, even more than images and sights, can be reassuring and act as a touchstone in unfamiliar places or situations.  Which is why most science fiction films set in the near future have sound designs that create an aural world that is different from what we are used to hearing but with elements that are familiar at the same time.  This is particularly true of Ex Machina (2014), which writer-director Alex Garland described as taking place "ten minutes from now".

Ex Machina centres on the ultimate realisation of artificial intelligence (AI), the creation of a convincingly and fully sentient synthetic 'human'.  Garland's point was that, if a company like Apple or Google unveiled such a creation tomorrow, people would be surprised but not that surprised.  While the movements of the manifestation of AI in the film sound disconcertingly alluring but non-human simultaneously, much of the background sound is reassuringly recognisable.

This is true of the helicopter that flies young computer programmer Caleb Smith (Domhnall Gleeson) up to the remote rural retreat of his reclusive employer, millionaire search engine developer Nathan Bateman (Oscar Isaac).  As the chopper leaves him, flying off and above in the Dolby Digital mix, Caleb withstands the downdraft and is then alone in a now silent field with mountains and greying skies as a backdrop.  Stumbling through woodland to find where he is meant to be, Caleb (and we) hear birds singing and running water, which link us to a normal, natural world but, in fact, create a sense that all is not right.

Eventually, Caleb finds an entrance where an automated voice speaks to him.  After taking his picture with a disconcertingly loud flash, the system whirlingly produces a photo-key card.  Inside the building it is revealed as essentially a man cave for Nathan, an ageing frat boy who also happens to be a programming genius.  In this echoey room, with tasteful piano music playing in the background, it becomes clear that Caleb has been brought there under false pretences; he hasn't won a competition but is to participate in a Turing test to determine if Nathan's latest creation — a robotic woman based on AI, called Ava — behaves convincingly like a human being. 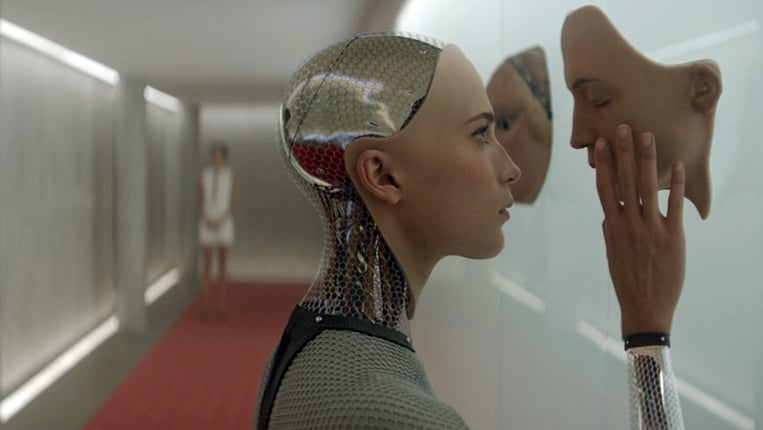 Ex Machina won the Academy Award for Best Achievement in Visual Effects in 2016 and it is this aspect of the film that, understandably, grabbed most attention when the film was released.  The trick was to show that Alicia Vikander as Ava was both recognisable and believable as a woman and a robot at the same time, especially in the early sequences when her mechanical and computer components are visible.  Sound plays its part in this, as it did in earlier portrayals of artificial life — the clanking of Robbie the Robot in Forbidden Planet (1956) and the motor whirrs of The Terminator (1984) or Data in Star Trek: The Next Generation (1987-94).

Even so, audio does take something of a backseat to the visuals, although that's not to say a lot of thought and work did not go in the sound design.  Alex Garland made the move into films when Danny Boyle directed an adaptation of his novel The Beach (2000), albeit with a screenplay by John Hodge.  Garland and Boyle cemented their working relationship on 28 Days Later (2002) and Sunshine (2007).  While Garland selected a cinematographer (Rob Hardy) and editor (Mark Day) who had not worked with Boyle for his directorial debut, he did bring in Boyle's long-standing sound designer, Glenn Freemantle, to work on the production.

Freemantle has said of Garland that, like Boyle, he does discuss ideas but doesn't tell people what they should do. "It's got to come naturally," Freemantle told me in 2019.  "I talk about the job with the director and I'll run through thousands of things.  You've got to be able to sort out what works and what should be there.  On Ex Machina the aim was to have beautiful movement sounds for the beautiful robot. The idea in my head was for her to move without there being a motor.  That meant finding something softer sounding than servos."

In Search of the "Right Sound" 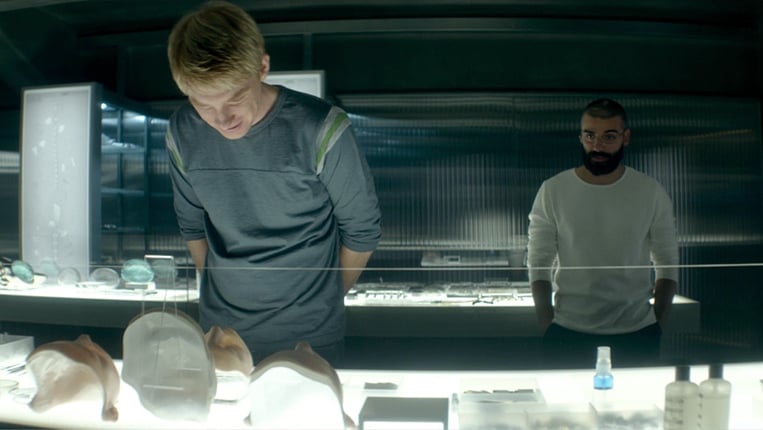 This search took Freemantle and his assistant to MidiLive Studios in Paris, where they spent eight to 12 hours a day for three days experimenting to get the right sounds.  This involved using gyros and other non-electrical/mechanical devices and items, including crystal bowls wobbling.  Contact mics and a hydrophone were also used to record through oil and water to produce tracks that eventually accompanied Ava's movements.  "One idea leads to another," explained Freemantle, “It's a progression of sound.”

All of this makes for robot sounds that are very subtle and attractive.  Anything else would have been too distracting and emphatic.  But, as with any soundtrack, there is an element of dynamics and the robotic noises are ramped up and become more noticeable in a climactic confrontation between Nathan, his servant Kyoko (who is revealed to also be an android) and Ava.

With Nathan dead, Kyoko out of action and Caleb trapped in the robotics lab, Ava dons her full human disguise, complete with wig.  Walking through the living room to the same piano music Caleb did when he arrived, she makes her way out of the woods to a waiting helicopter.  This sequence and Ava's arrival in the city, play to Ben Salisbury and Geoff Barrow's chiming, ethereal music, although there is an almost piercing note that sustains throughout the otherwise gentle track.

There are no natural sounds or other effects giving Ava's entry into human society a dream-like quality.  In the final shot, looking bewildered or perhaps disappointed, Ava turns and walks back the way she came as the music goes through a reverse effect.  Is she going back to Caleb? Or has this all been someone's fantasy?