Coming up next: 6G 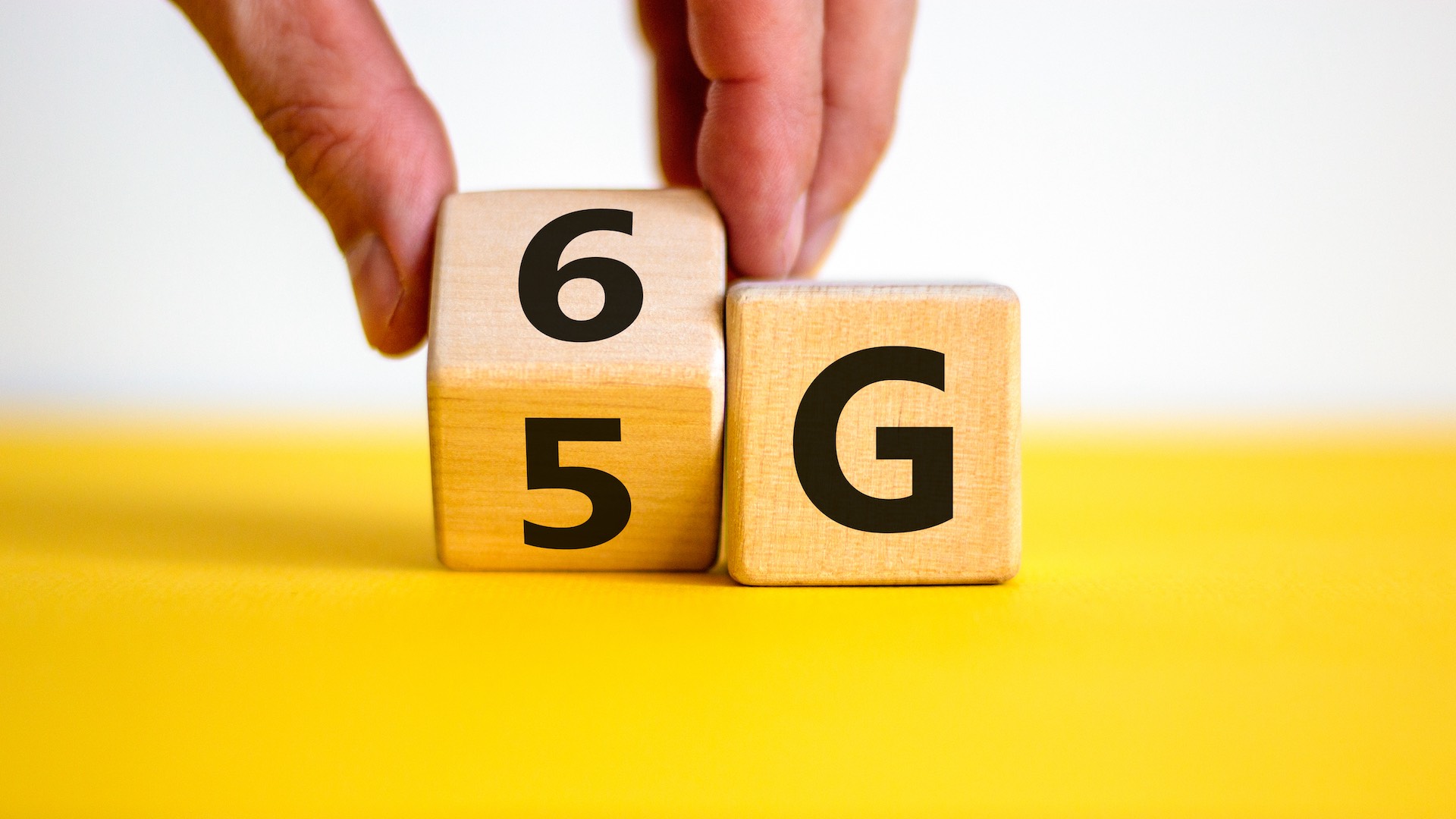 While 5G is still very much a work in progress, industry thoughts are already turning towards the next generation of mobile connectivity: 6G.

Every ten years, give or take, the industry unveils a new generation of mobile connectivity. In 1991, the first digital telecommunications standard, 2G, was launched and provided the world with the ability to send text messages. A decade later, 3G upped the data transfer rate into the low Mbps range and unlocked the possibility of data services. In 2009, the fourth generation 4G networks launched, taking the data rate to a theoretical maximum of 100Mbps and making mobile internet connectivity — and thus the smartphone — possible.

Now, of course, we have reached 5G, and are in the midst of what seems to be an agonisingly slow rollout stymied by two main factors: the pandemic and the sheer cost of building out the new networks to support it. As a result, some of the more hyperbolic promises that have been made for the technology — Totally wireless 4K cameras and production systems! Autonomous cars! The Internet of Things! — seem to ring a bit hollow. Talk to broadcasters and the network slicing that they will depend on to operate at big events — essentially a technique that reserves a part of the 5G spectrum for their own specific use — just isn’t there yet.

Nevertheless the technology is coming. From 2G to 4G (1G was analogue and no one likes to talk about it really) the deployment has always been lumpy, with the technology only really considered to be genuinely mass market and mature by the time we reach the latter part of the decade it was introduced in. Anti-vax conspiracy theorists can relax, by the time 5G reaches their mountain hideouts they will have died of boredom long before the kill signal can be activated.

But that does mean that, even while we wait for the promise of 5G to be fulfilled, people are already starting to hold meetings and seminars regarding the generation beyond it: 6G.

6G: a work in progress

First off, anything regarding 6G comes with a huge disclaimer that nothing is locked down and decided yet. There are technology candidates and there are prospective use cases, but everything is fluid and will remain so for quite some time yet.

What we do know is that it will be faster than 5G. That is part of journey that has taken us (admittedly under ideal conditions) from megabit with 4G to gigabit with 5G and potentially terabit with 6G. Even if we throttle back from that peak, it still delivers the prospect of low latency multi-gigabit connectivity. And, if we can harness developments in LEO and MEO satellite, it can do that pretty much anywhere and everywhere.

Indeed, satellite is one of the key ways that 6G could be differentiated from 5G from the start. That was always terrestrial network first, satellite considerations second. Flip that around, or at least balance it, and you could potentially accelerate the rollout and make it more uniform at the same time.

The diagram below is taken from a NTT DOCOMO white paper and outlines some of the ways in which it is expected 6G will outperform 5G. 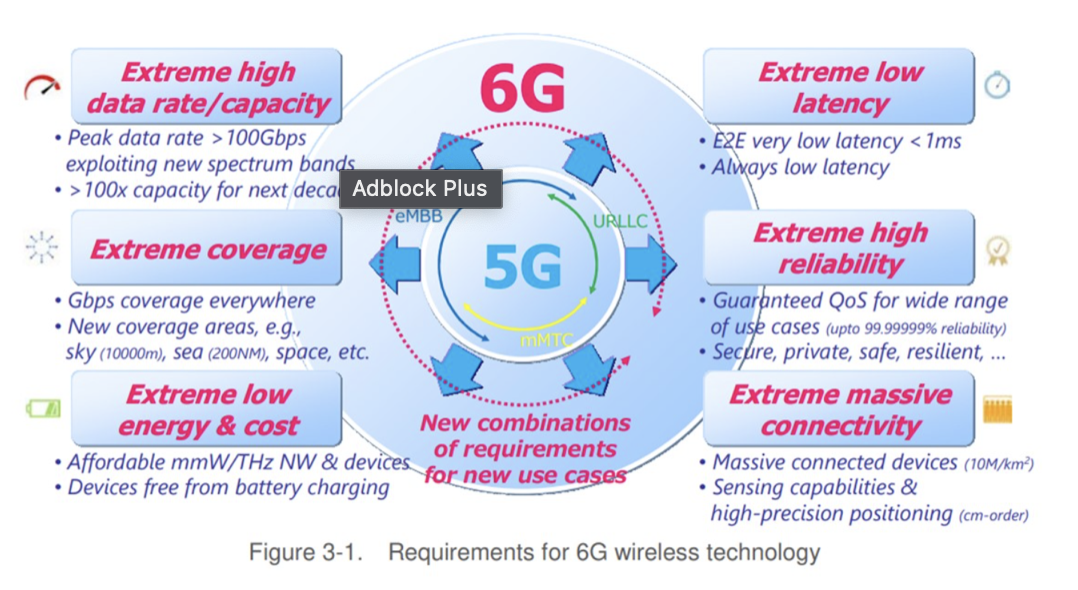 The list of candidate technologies that can potentially allow all this to happen is quite an extensive one. We’ll examine them next year as the different advantages and disadvantages of each become more obvious, but the starting grid includes terahertz technologies, new antenna technologies, an evolution of duplex technology, an overhaul of network topology, spectrum sharing, the still nebulous promise of AI, split computing (ie utilising computing resources in the edge and further into the cloud), and high-precision networks. These are all name-checked and backed by different organisations.

Their use in turn gives rise to an interesting new set of technologies that 6G will enable above and beyond what 5G will be able to do. This includes truly immersive XR, the prospect of high-fidelity mobile holograms, the possibility of replicating physical entities, including people, devices, objects, systems, and places in a virtual world (this is where the metaverse goes from being a nice idea to a realistic proposition), and, of course, completely tetherless production. Any camera to any device anywhere...

Getting from A to B

Obviously there is a lot of work to do before even experimental rollouts can be considered, and some time has definitely been lost to the pandemic. The Next Generation Mobile Networks (NGMN) Alliance’s 6G Drivers and Vision paper lays out some key considerations that need to be considered in this R&D phase, namely to address societal and environmental needs, including well-being, prosperity, sustainability (a low carbon footprint and energy consumption is considered vital), trust, safety, affordability, resilience, and inclusion.

That’s a lot of challenges to meet and not a lot of time to do it in. The ITU-R began its work to define a 6G vision over the summer, and one thing well worth considering is that the developments of successive generations of mobile technology have been accelerating. From initial research to mass market deployment was 15 years for 3G, 12 years for 4G, and is forecast to be about 8 years for 5G. Even if the pandemic slows things down for 6G, if the spec starts to be locked down in earnest next year that’s a target date of 2030.

Hold on to your hats…