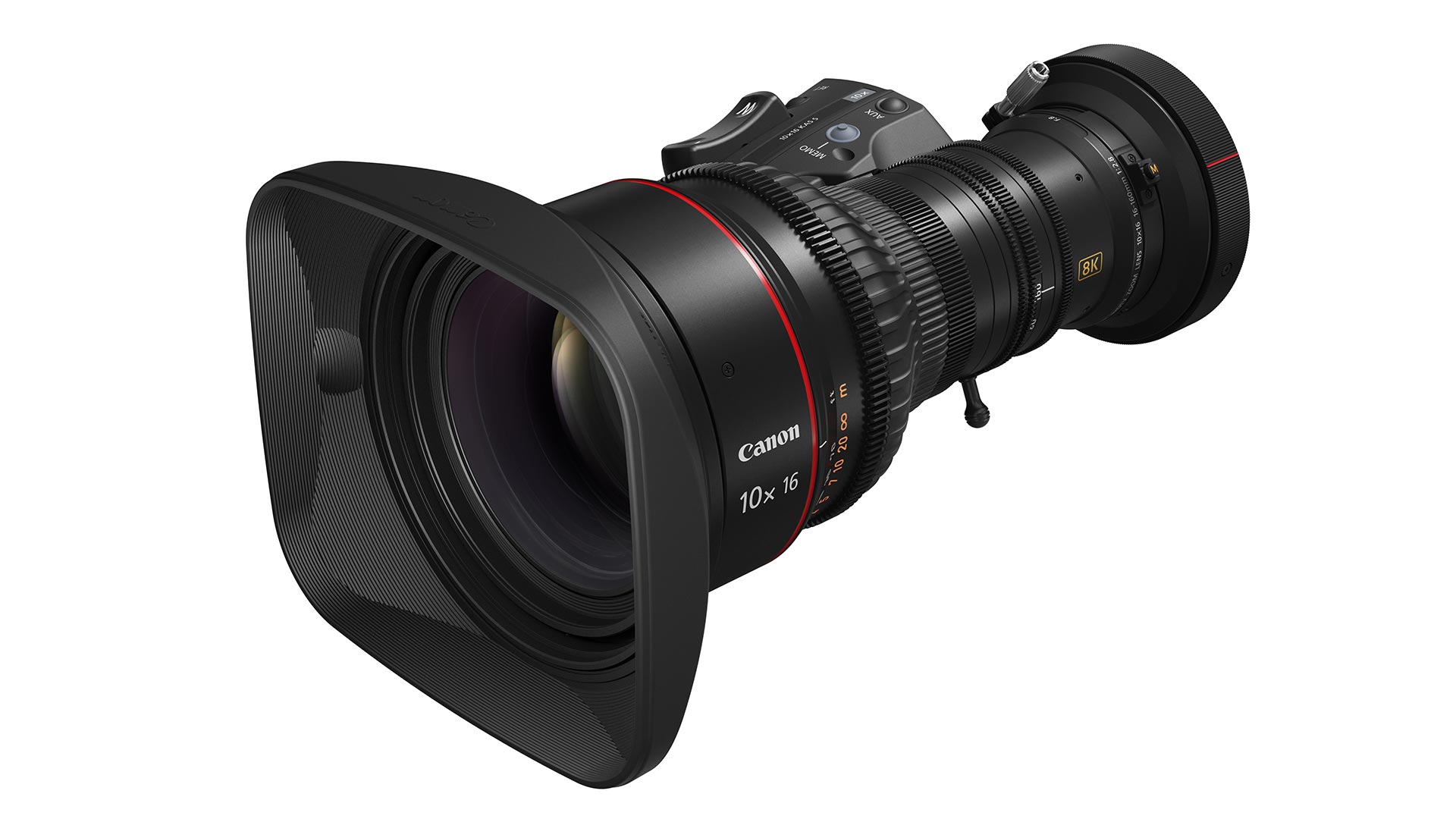 You might have seen the number 1.25-inch bandied about. We examine this new B4 8K standard as Canon announces new glass for the format.

One of the things that would have been nice about a more fully-realised Tokyo Olympics might have been a wider option to witness NHK’s grand plans for 8K. For the last few years, the Japanese broadcast equipment industry has been awash with activity toward that goal, reminding us that cameras are only part of the equation. We’ve seen wireless transmission systems, recording and routing devices, vision mixers, and yes, cameras, back as far as the 48-link SDI monstrosities that first emerged in IBC’s future zone as far back as 2012.

And of course, we’ve seen lenses, such as Canon’s just-announced 10x16 KAS S, a lens designed very much for the broadcast market and intended to suit 8K cameras with 1.25” sensors (about which more anon). The company’s background in lenses goes back a lot further than its pedigree in video cameras, which by all accounts emerged more or less by accident in the form of the seminal 5D Mk. II. It’s no surprise, either way, to find that by the end of 2019 it had already announced two lenses intended for 8K acquisition. 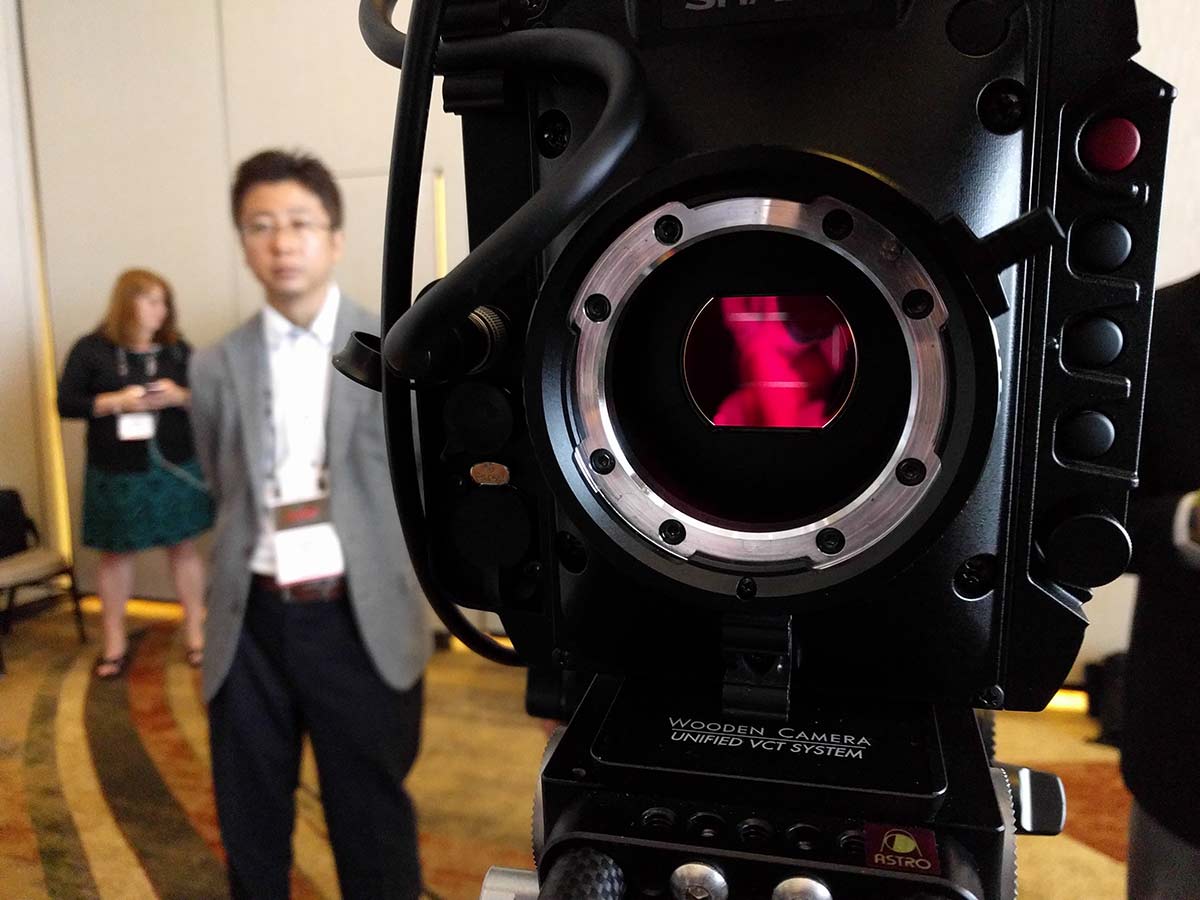 The Sharp 8C-B60A was shown in 2017, and represented a very usable level of sophistication. As a single chip device, it used a PL mount and was shown with a Zeiss 28-80mm Compact Zoom.

The UHD-Digisuper 51 is what Canon refers to as a “field zoom,” a big-box lens for pedestal cameras offering a zoom range of 15.5 to 770mm (or that is, 51x15.5mm) and yes, there’s a 2:1 extender if you want to be able to count the hair follicles on a Martian’s head from right here on Earth. Lenses like the UHD-Digisuper 51 don’t get the sort of public adoration that mid-century single-camera anamorphics do, and that isn’t always very fair. These things are massively capable while being intended to satisfy the huge hunger for resolution of an 8K display.

Revealed at the same time, the wider-angle 7x10.7 may not seem that wide when compared to the sort of broadcast zooms which are intended to survive press scrums, though recall that it’s intended for the 1.25-inch sensors which are practically twice the size of the 2/3-inch devices which we’ve managed to make work in cameras up to 4K.  Larger sensor, more field of view; 10.7 is properly wide. As such, the newly-announced 16-160mm option is… well, probably still fairly wide, but clearly a much longer range. It maintains f/2.8 all the way to the end, which is a pretty spectacular achievement in something not quite ten inches long. 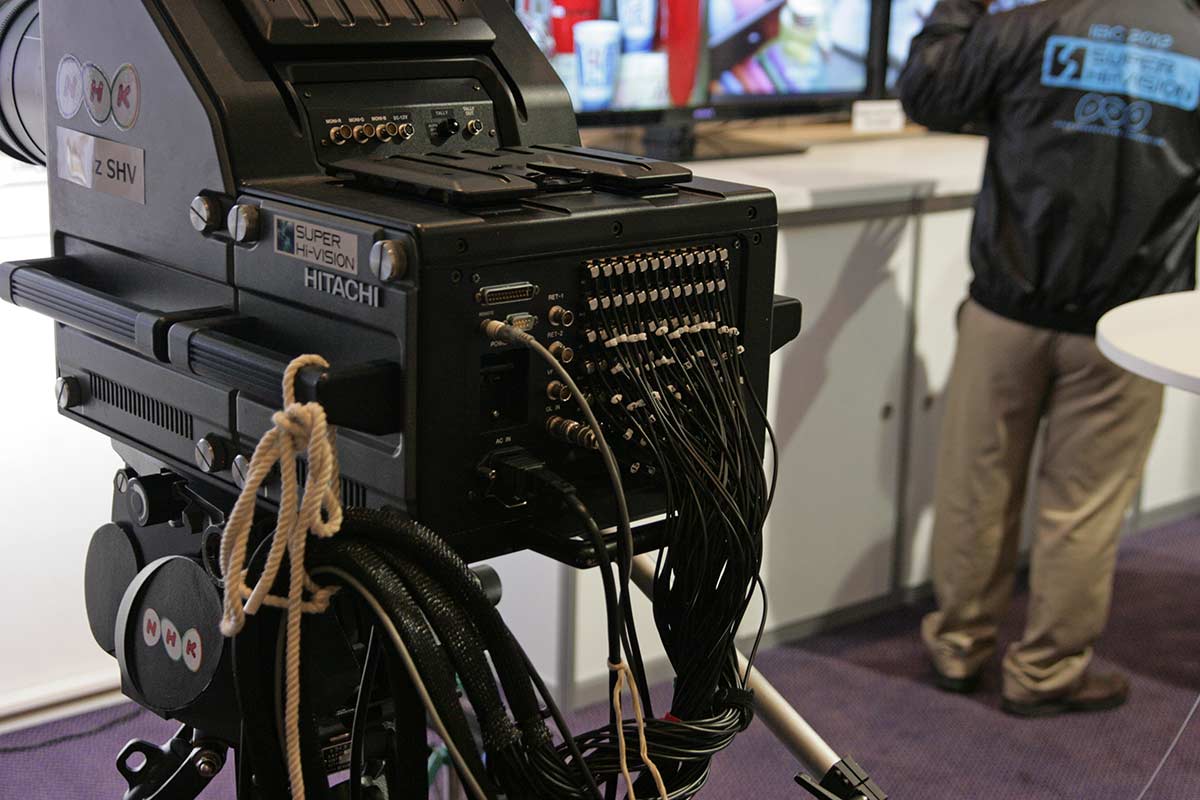 NHK and Hitachi showed this 8K camera at IBC 2012; count at least 48 connectors on the back, supporting 8K and high frame rate. 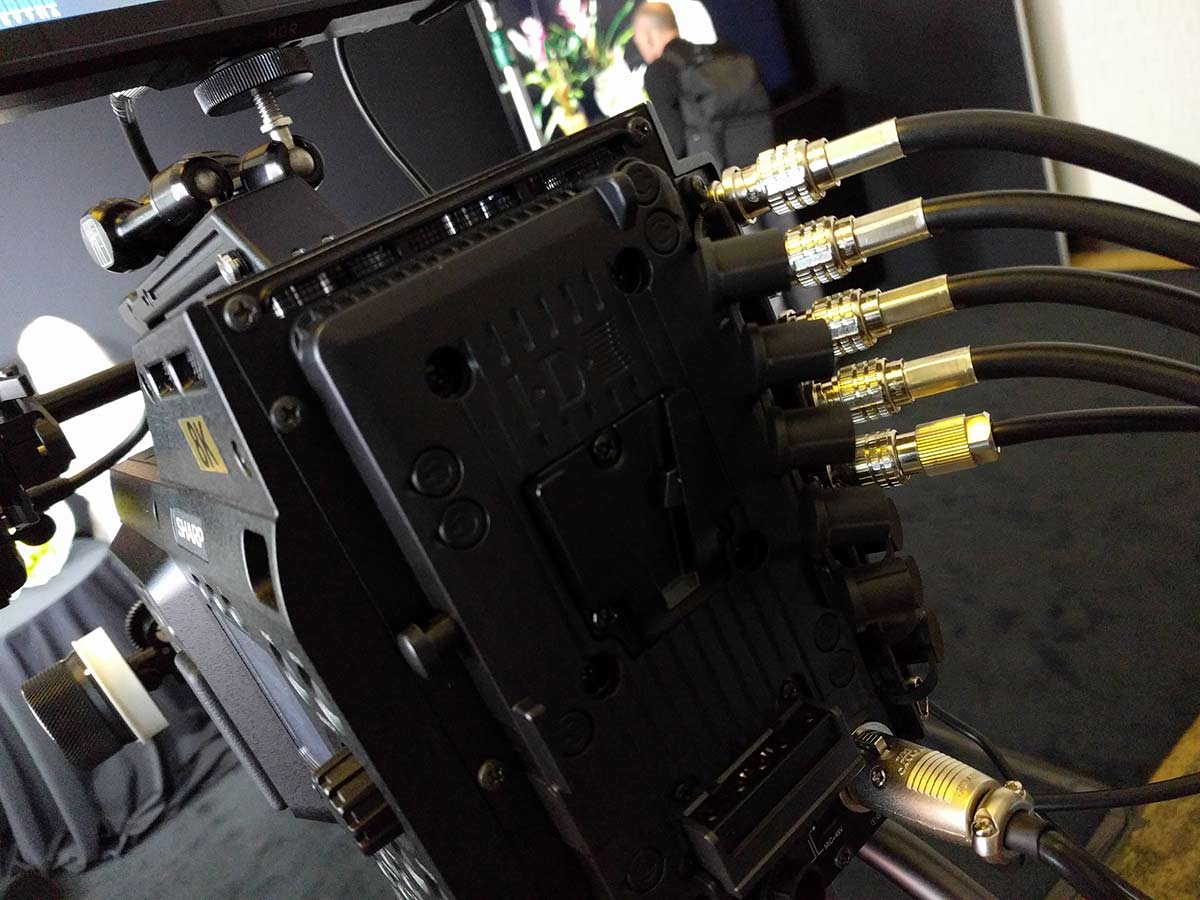 There is an interesting technological subtext to all this, which is that the fairly new 1.25-inch sensor blocks found in 8K broadcast cameras like the Sony UHC-8300 sound like they ought to be pretty similar in size to a Super-35mm film frame. It’s worth thinking about this because distributors of the UHC-8300 have stated that the sensor is almost 32mm diagonally and, as we’ll see, that isn’t actually the case, even if it’s tempting to wonder at least theoretically about the suitability of these high-performance lenses for single-chip, super-35mm 8K cameras in the same way people adapt 2/3-inch lenses for them now.

Unfortunately, it doesn’t quite work like that; the sensor in the 8300, and the sensor for which these lenses are designed, is not actually 1.25 inches in any dimension. That’ll have been to the relief of the people designing these 1.25-inch lenses, who’ll have had a slightly easier time not having to land such a big image. Sony itself has commented in the past that the selection of sensor size was a carefully-chosen compromise between resolution, sensitivity, noise and dynamic range, as well as crucial but tricky things like focus pulling and lens design which are made even more critical by both the high resolution and the bigger chip.

In reality, just as with 2/3-inch cameras, the size given is not the size of the active sensor area – it is, obscurely, the diameter of a vacuum tube image pickup device which would have created an intended picture area of the sizes we’re used to, even though no 8K vacuum tube image pickup has ever existed, or ever will. An actual 2/3-inch video sensor, which we might instinctively expect to be nearly 17mm diagonally, is actually only a hair over 11. In the same way, we might expect the 1.25-inch sensor to be 31.75mm across, but according to Fujifilm’s discussion of the topic they’re actually more like 26. How this number was arrived-at is anyone’s guess, though it seems likely to define the capabilities and behaviour of a whole new generation of broadcast television equipment, assuming 8K ever takes off (and that’s far from certain at this stage).

Let’s all raise a glass to the rich and involving history of film and TV gear, and its tendency to make things easy to follow. 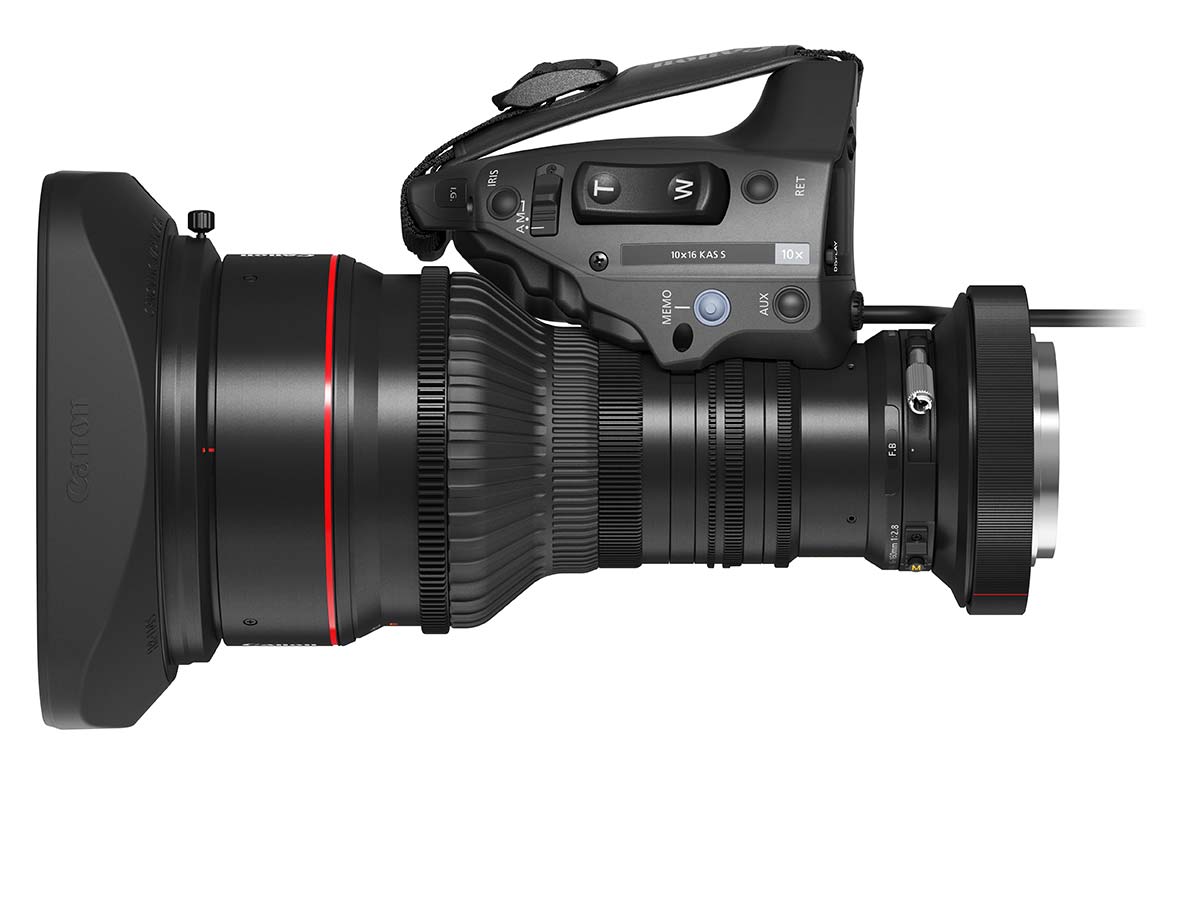 In the end, that headline claim of 8K performance is actually quite hard to analyse. Things differ from the situation with HD and then 4K, because plenty of people shot HD with standard-definition lenses, or 4K with HD lenses, and nobody seemed to mind too much. Perhaps that’s because there’s never been a particularly widely-accepted standard for rating the sharpness of lenses, and most of them behaved well enough to be usable, at least when used at moderate settings. It’s when settings become immoderate – maximum focal length, minimum aperture – that things get tricky.

Historically broadcast TV has had more tolerance for that than single-camera drama, because broadcast TV valued a picture with slightly soft corners over no picture at all. Canon tells us that these 8K lenses are designed to be sharp corner to corner, though even then “sharp” is a word with many semantics. Given the huge pixel counts involved it’s a bold claim regardless.

No, Canon hasn’t published a price for the new 10x16, but we can confidently assume that if you have to ask, you can’t afford it.