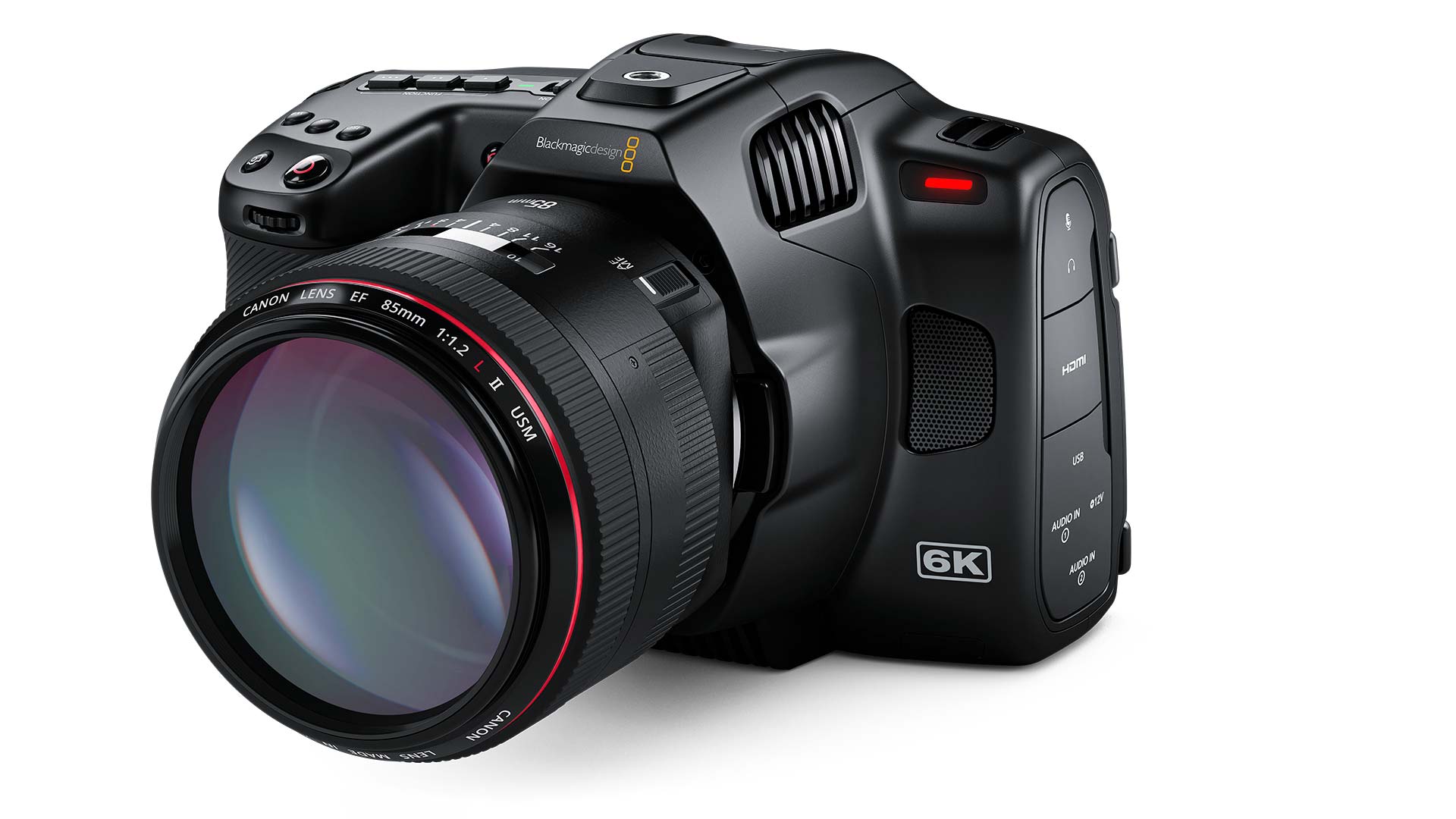 The BMPCC 6K Pro is Blackmagic Design's latest iteration of the Pocket Cinema Camera series. Phil Rhodes takes it through its paces.

The Blackmagic Pocket Cinema Camera 6K Pro has a thirteen-syllable title. For today’s purposes, we’ll call it the BMPCC 6K Pro, but while we can shrink the name we can’t shrink the camera, which is, while fairly compact, not nearly as pocket-sized as that name suggests. It’s also not nearly as small as the earliest incarnations of the range, which you really could slide into a reasonably capacious pocket and lamentably overlook until the washing machine starts making a loud clanking sound during the spin cycle. The BMPCC 6K Pro is big enough to make that sort of accidental laundry incident unlikely, although it's compact enough to avoid standing out in a crowd.

The bigger and more interesting question is whether the 6K Pro is the sort of camera you need for what you do? It’s an unconventional beast; something that approaches stills ergonomics from the direction of cinematography, as opposed to approaching cinematography from the direction of stills like transitional, video-capable stills cameras do. The price is around £500 higher than the original 6K pocket camera, but we can be clear upfront that yes, if you’re interested in this sort of camera, it is worth paying that extra money.

Now that's what I call a sensibly-placed start button.

From a practical point of view, the most valuable improvements on the BMPCC 6K Pro are (no surprise) the ND filters and the improved tiltable display; some sources call it HDR, although outside in the sun it’s really just about having as much contrast and brightness as the thing can muster, and it now tilts. The detachable top-mounting EVF – not supplied as part of this review – is a nice idea, and it does articulate to make it a lot more useful than common fixed viewfinders on cameras of this layout.

There's a lot back there, although it'd be nice to have other lens mount options.

The choice of a Sony NP-F battery is widely seen as a welcome upgrade, although it’s limited to the small NP-F570 pattern, offering a modest 22% improvement in capacity, depending on exactly whose batteries you buy, over the LP-E6 used in the non-Pro camera. Still, a frugal design ensures about an hour of use. It actually sips gently enough at the electrons to provoke awkward questions about why the Ursa Mini Pro, at lower resolution, consumes something like double the power. The 6K Pro’s optional battery grip works like those used by a lot of DSLRs, with two batteries in a slide-out tray which then goes inside an outer shell. As such the result has rather low power density, moving the camera decidedly from “chunky” to “mammoth,” though handily the tray can be extracted while the camera is mounted on something.

The battery grip takes two more NP-F batteries. Whether that's the best possible use of space is a reasonable question, though it can be reloaded on a tripod.

So, to that famous front end with the ND filters. Manufacturers put EF mounts on cameras because lots of people have lenses that fit (your narrator owns a T-shirt celebrating the sale of the hundred-millionth EF lens, and that’s just Canon’s own output, let alone clones). The downside is that EF is a fairly deep mount, precluding, among other things, almost all PL lenses as well as micro-four-thirds options like Fujifilm’s popular MK zooms. Some people might prefer a micro four-thirds mount, with an adaptor built to pass through electronic control to EF lenses. If that sounds impractical given the need to have space for the ND filters, consider that JVC once managed to fit a rotating filter wheel and a super-35mm sensor behind MFT. Given the layout, possibly the smartest move is to throw a pancake 50mm on the front and control framing with camera position. That’s the sort of thing it is; it’s a run-and-gun master.

In that situation, inbuilt NDs are a boon, of course, and that alone is probably worth the £500 over the basic 6K pocket camera (evaluate what a decent set of NDs would cost, let alone the size and weight penalty of a mattebox or the inconvenience of screw-on circular NDs). Blackmagic’s contrast-detect autofocus is good… for contrast-detect autofocus. It is also increasingly inadequate in the face of highly competent competition from manufacturers with decades of experience in stills camera design. It’s not a dealbreaker here any more than it’s a dealbreaker on the URSA Mini, but don’t expect things to snap into focus as they would with Canon glass on a Canon body. 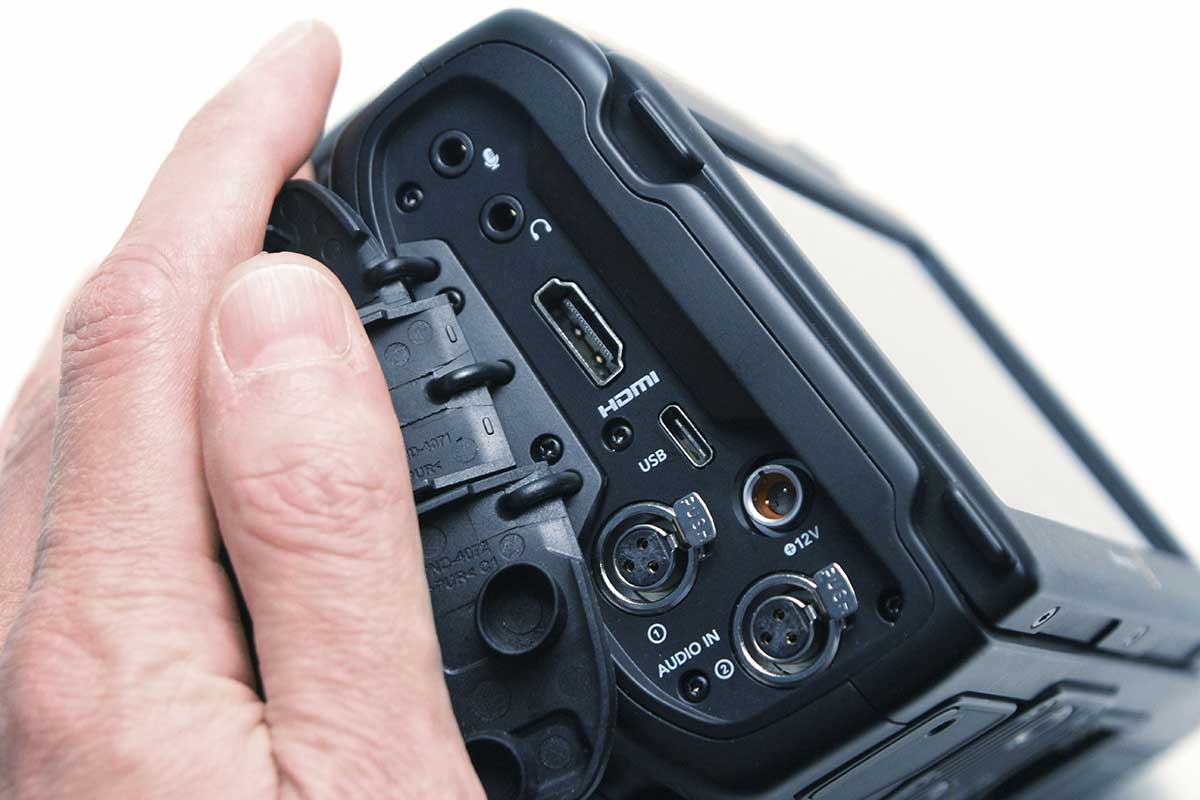 Pictures are identical to those on the conventional 6K. The sensor is estimated by the company to sacrifice a stop of dynamic range over something like the 4.6K URSA Mini Pro, and while there’s some opinion involved regarding our tolerance for noise, that’s roughly what we’d expect given the increased pixel count. Most people will happily give that stop away in return for the dual native ISO. The recording options are a mixture of ProRes and Blackmagic Raw for various combinations of frame rate and resolution, with the headline 6K resolution available in Blackmagic Raw only. It’d be nice to see more ProRes options for when we can’t impose a manufacturer-specific format on a client but the extra resolution is needed.

However it’s recorded, 6K in general is a stupendously nice thing to have, allowing plenty of slack for Fincher-style post-reframing while still producing a convincingly oversampled 4K result. The fastest frame rates are rather cropped, compromising noise a little and field of view a lot, so keep that 17mm lens available. Still, 120 HD frames used to be exotic and now it’s normal on easily-backpacked cameras like this, which is great.

In short, it’s interesting. It’s almost a new variety of camera, or at least a significant departure from the norm. It’s not a true pocket camera at all, but equally, rigging it to be more like a production camera probably isn’t sensible; in that case, get an URSA Mini Pro. However, it’s still a lot of picture quality in a highly portable device. It’s no longer unusual to be able to say that someone could shoot a major feature film on one of these and nobody would notice.

It is a bit of a beast, the autofocus is mediocre and the lens mount is chosen to accommodate people with an existing EF investment. Compared to a transitional stills camera, though, the 6K Pro makes far better recordings, the viewfinding is a breath of fresh air, the ND filters are a huge relief and Blackmagic’s approach to menus is still something that the oldest established companies in film, TV and photography could learn from.

It’s hard to sum up; it’ll appeal to people whose desires sit somewhere between handycam, production camera and DSLR or mirrorless, and in that sense it fills a gap that perhaps we hadn’t realised was there.