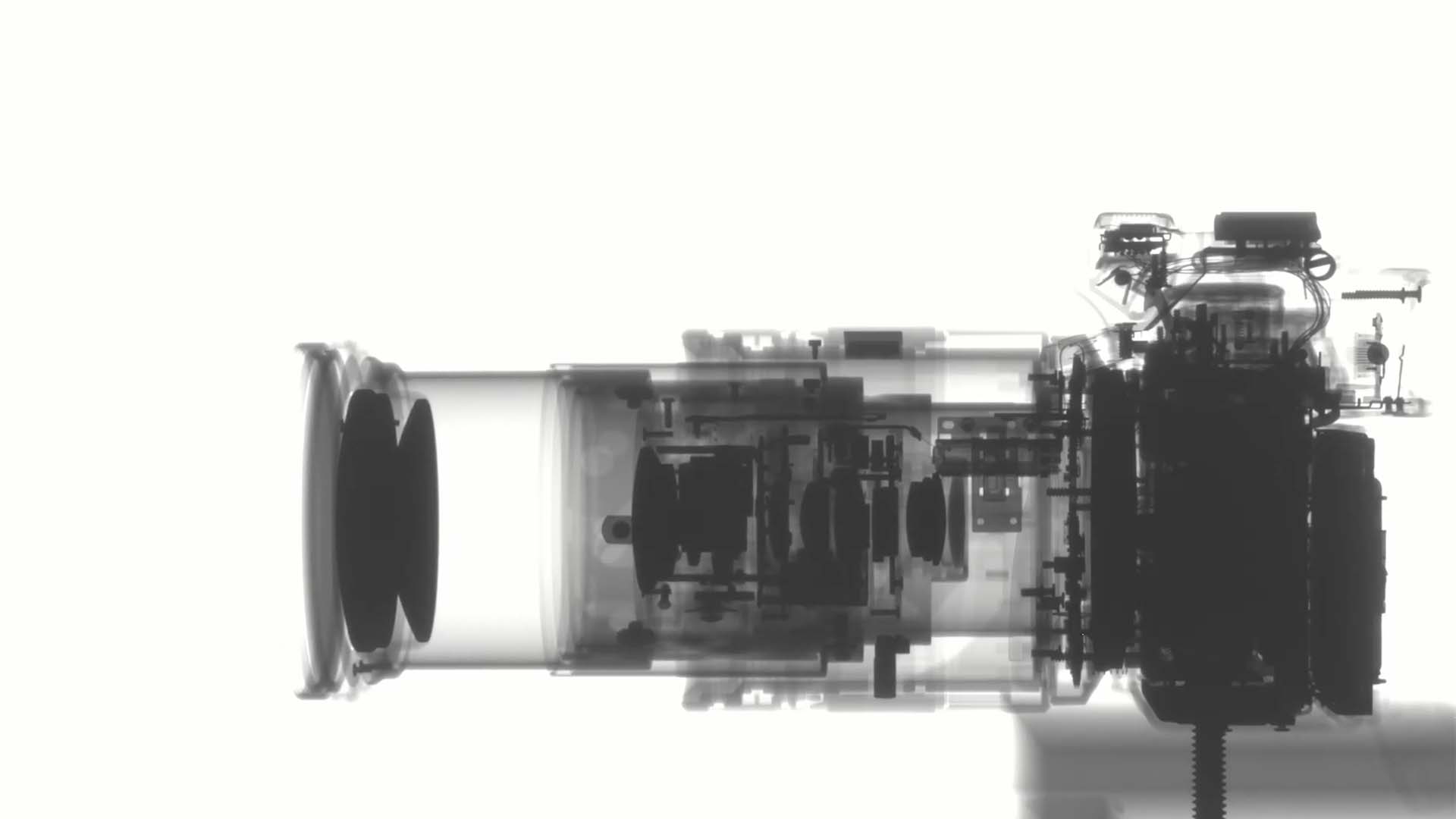 3 minute read
Watch the workings of a modern camera lens in action, all courtesy of a giant X-ray sensor timelapse rig.

We've seen some unique image acquisition in our time, but this one, using a hospital X-ray sensor, is producing some stunning results.

At first, two-thirds inch chips were way too small for cinematic images (except when they weren't). Then, once we'd replaced them with Super-35mm chips, it quickly became clear that they weren't nearly big enough, hence the absolutely cast-iron technical justification for large format chips, which are absolutely always a good idea (except when they aren't). Renowned internet tinkerer Ben Krasnow, proprietor of the excellent Applied Science YouTube channel, seems intent on putting this argument to bed once and for all, however, with his time-lapse images made with - wait for it - an image detector nearly sixteen inches square.

Having baited sufficient clicks, let's be clear that this isn't exactly what we might call a conventional CMOS camera chip, and it isn't capable of capture at video frame rates. At 400mm square it's fairly low-resolution at 2048 pixels a side, for a total of four megapixels (though think about that gargantuan pixel size). It takes several seconds to capture an exposure. The sensor itself is stacked behind a phosphor screen, because this is a device designed for detecting X-rays as part of a portable medical imaging system. Conventional camera sensors don't see X-rays, but phosphors glow when exposed to them, and we can photograph the light emitted by the phosphor; this is how everything from hospital X-ray machines to baggage scanners works.

Often, modern X-ray machines use a fairly conventional DSLR to take a photo of the glowing phosphor screen, which is quicker and cheaper than processing photochemical film. It can also involve a reduced dose of X-rays (which are, after all, potentially hazardous ionising radiation) due to the higher sensitivity. Krasnow's sensor is in a flat plastic package designed to be easily slid into a convenient location without having to move the patient around too much.

In that situation, there isn't room for the conventional DSLR setup, and the only solution is a very large area sensor at least the size of the area we want to image. The sensor needs to be at least the size of the thing we want to see because all X-ray images are effectively shadowgrams. It's very difficult to make a lens which works with X-rays, or at least a lens of any serious power, because the high energy of X-ray photons compared to visible light means (for complicated reasons) the refractive index of nearly everything is nearly unity. Similar problems attend creating reflective optical elements for X-rays, so they're very difficult to focus; as such, the X-ray glasses popularised by 1950s science fiction must remain just that.

So, to form an X-ray image usually we just create the smallest point source of X-rays we can, and let it cast a shadow of the subject we're interested in, which means the shadow will always be slightly larger than the subject, to a degree controlled by the distances between the subject, the X-ray source and the sensor.

Krasnow is a popular figure among serious propellerheads, with a huge portfolio of projects involving engineering, electronics, pyrotechnics and optics. He has used his vast sensor to create timelapse images of various mechanical and biological phenomena, particularly plant stems taking up fluid by putting them in a vase containing potassium iodide for improved contrast in the X-ray.

To do that, he was required to operate an X-ray tube, something that is not without risk due to both very high voltages and ionising radiation, even though that can be a risk to some extent with almost any free-electron device using five-figure voltages. While Krasnow is an informed experimenter and took straightforward steps to reduce his exposure to trivial levels, this is definitely not something to play with at home, no matter what amusing toys are available on eBay this week. No, you couldn't shoot a whole X-ray movie, even if the sensor did video frame rates, without risking  radiation injury to the cast.

So, sit back and watch the particularly fascinating X-ray stop-motion of a zoom lens in actuation, secure in the fact that YouTube has done it so you don't have to. Wonder at the engineering required to fabricate such a vast sensitive device and make it useful, then weep copiously at the abject awfulness of the supplied software in the context of what a device like this must once have cost.

Krasnow worked it out.