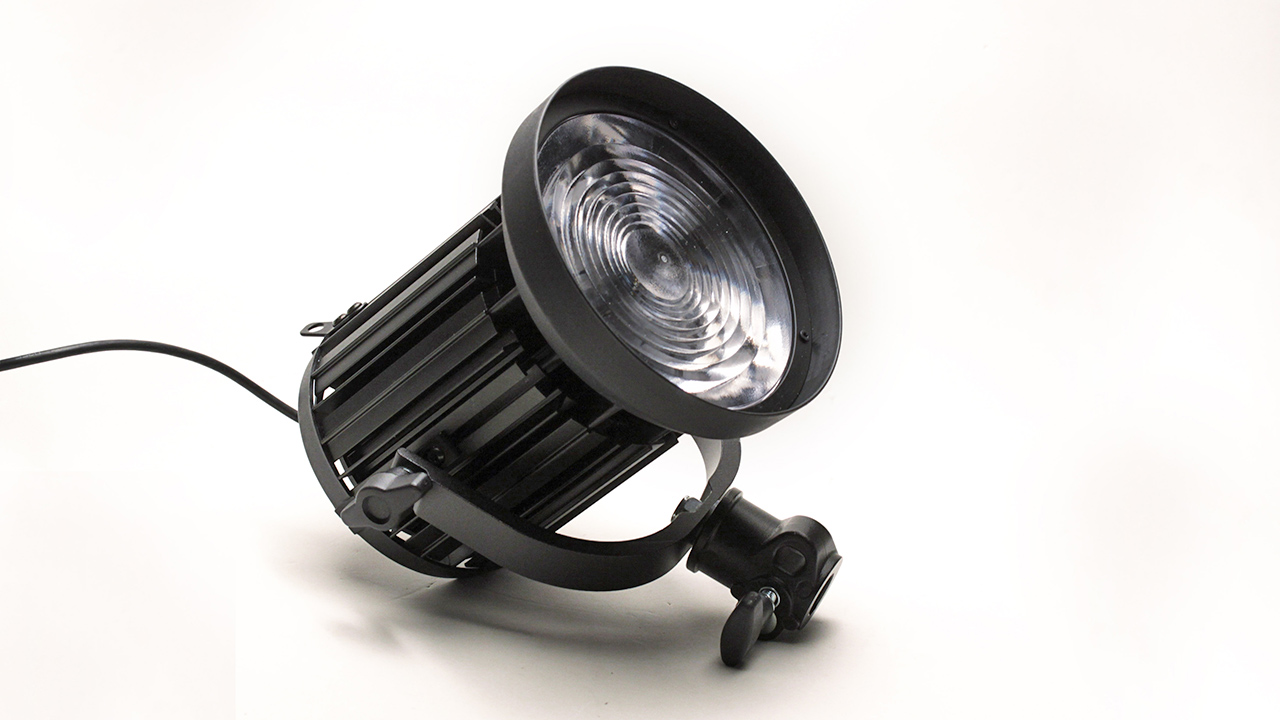 For a long time, the easiest type of LED light to make has been a soft light, simply because individual LED emitters handle on the order of a watt or three. Achieving any sort of output requires a whole bank of them, and so hard lights, requiring a small source, have been tricky and expensive. Our subject today is interesting, then, because it’s about as far from a soft light as it’s possible to be.

BB&S call it the Compact Beamlight but theatre people would recognise it as a pin-spot or ACL. The term originally meant “aircraft landing light,” a very directional sealed-beam design often used to create lancing shafts of light. ACLs, though, create their beams with a parabolic reflector, whereas the beamlight is broadly a fresnel, though the lens is reversed compared to conventional designs in order to behave as a collimator. The PAR approach is efficient with tungsten-halogen bulbs, but there’s absolutely no sign of the fresnel costing us anything with the LED. Concentrating all the light into a narrow beam tends to make anything look bright, but the CBL-1 is titanically punchy, suffers a minimum of haloing thanks to the careful optics, and seems more powerful than its modest 40-watt specification would suggest.

Fifteen variations exist, with beam angles between seven and seventeen degrees and colour temperatures between 2700K and 5600K. For this review, the company supplied the seven-degree, 5600K option, as well as an 11-degree bi-colour example. The chassis are identical, roughly the size of a conventional PAR36 housing, although the majority of the outer shell is an extruded profile that looks to be providing heat sinking. There’s no cooling fan in either the head or power supply and the light is silent. 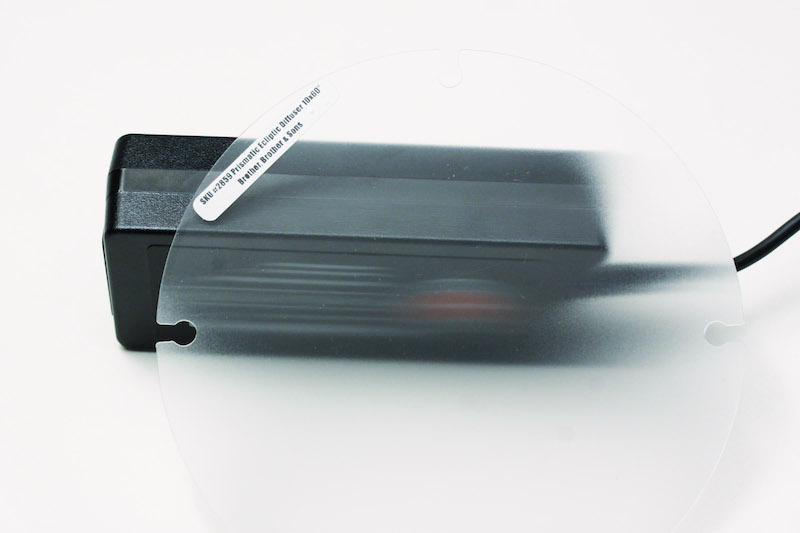 This is the widest prismatic diffuser which turns the 7-degree beamlight into a bold horizontal plane of light.

Power options include configurations for studio installations or a single device on location. The fixed-colour light uses a small handheld dimmer and either a mains power supply or D-tap for battery power. There’s also a DMX-connected controller (not reviewed here) that handles up to four lights. Dimming is linear to low levels, with no sign of flicker or pulse-width modulation except for a microscopic bit of unsteadiness if we really torture the bi-colour controller at its minimum possible output; the DMX controller may differ. 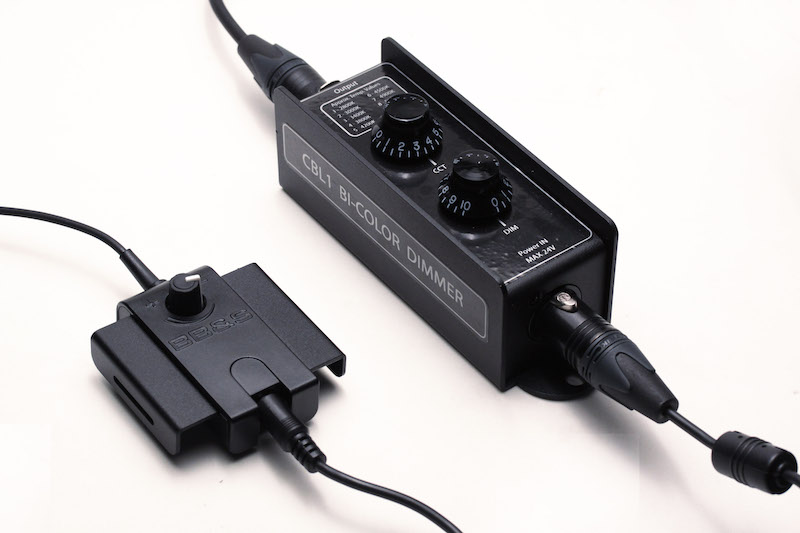 Left is the dimmer for the fixed-colour beamlight; right is the bicolor controller.

Controlling the bi-colour light is straightforward; there’s no numeric display of colour temperature, although the printed legend suggests some colour temperature settings (labelled “approximate”) which, near full power, actually turn out to be pretty accurate at the end stops. At low output the two controls do become somewhat interactive, so it might take a little back-and-forth between two to get the result we want.

Optional extras include a wide range of modifiers with handy magnetic attachments. The barn doors don’t do much to the unmodified light, as we’d expect on such a narrow fresnel, although adding the tidy circular diffusion changes things. BB&S supplies prismatic diffusion which is a little more efficient than conventional designs as we saw in the context of Rosco’s Opti-Sculpt.

The ten-by-sixty degree diffusion creates a flat plane that can be controlled with the barn doors, although sharper and more accurate cuts can naturally be made with a flag even a foot or two away. DoPChoice offer a compatible snapbag. The resulting foot-square diffused light is naturally not as bright as conventional soft panels which are typically more than twice the power, but it’s effective, including an approximately conical first-stage diffuser to avoid hot-spotting the front panel.

Optical measurements are made awkward by the huge intensity; our usual measurement at a metre in beam centre simply yields an “over exposure” warning from the UPRTek CV600 meter. These measurements were taken by bouncing the light off a white card about five feet away, with the diffuse reflection still measuring 12,000lx at a few inches. Measurements may therefore be affected by any error in the white card, but the white light quality, even in the cooler 5600K version, is superb. TLCI is a solid 92 and remains above 91 all the way down to close-to-minimum intensity. CCT accuracy is excellent, measuring 5409K. That’s effectively no error at all; it’s a mired shift of 7, less than half a one-eighth correction filter. R9 reds are fractionally low at around 60, but that’s not unusual for daylight LEDs.

Colour quality is superb, and remains so even at low output. There is a very tiny plus-green error, but nothing to write home about.

The bi-colour option is even better. It measures 5904K at the cooler end, microscopically close to the stated 5800K. At the warmer end, marked 2800K, CCT measures 2859K which is well within experimental error for a handheld meter. In both cases, colour quality is best in class. Even at the cool end, TLCI is 98, R9 reds are 96 and even the difficult R12 blue is a healthy 76. At the warm end, TLCI is 96, R9 is 93 and R12 is 84. Warmer is easier, sure, but it doesn’t really get any better than this.

BB&S list the 5600K light, head only, at €335. The bi-colour option goes for €417. Both require power accessories depending on application; the bi-colour controller, for instance, is €325 with the D-tap cable. DoPChoice’s softbox, ex grid, is €275 and requires either barn doors or filter ring. If you want a soft light you can get far more watts for the money, but that’s really a secondary use. In theatre and studio work the application is clear; elsewhere it’ll often be a special purpose light. If you want a really serious beam without going to a full profile-leko-ellipsoidal-call-it-what-you-will, which costs far more and needs more watts for a given number of lux, the compact beamlight has very few rivals.