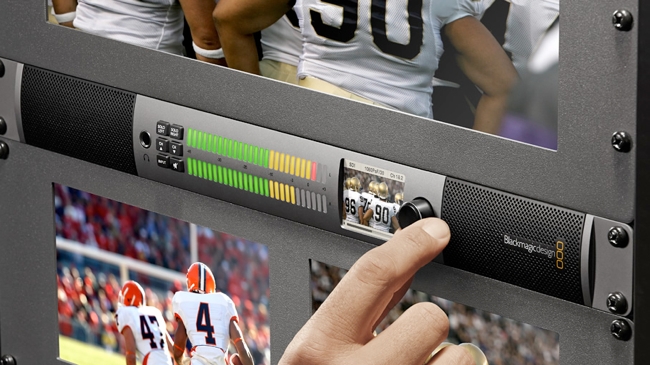 Blackmagic's new rackmount audio monitor is a single rack-unit active monitor that can extract audio from a variety of digital video signals, play play it through internal speakers and display audio levels on large bar-graph meters

Let's be quite clear about this: when I want to hear quality audio, I don't normally plug my signal into a 19" rack mount unit with tiny-looking speakers on the front. I'd be more inclined to line-up some Genelecs or KRKs or whatever high-quality active monitor speakers I might be able to lay my hands on.

But fantastic though professional monitor speakers might be, they don't typically have SDI sockets on the back. Still less an HDMI loop through that can send a 4K video signal back out to a 4K TV.

And what you definitely can't do with professional monitor loudspeakers is rack mount them.

Not that you'd want to. In a live television production environment, it's busy, noisy and tough. You need something specially designed for that regime and the chances are it would look like this.

The Blackmagic Audio Monitor is a problem solver. It's the solution to how you make sure that there's audio present on your video signal, and that it sounds OK. And it's a tool that's tough - so you can take it anywhere. It's pretty versatile too: audio arrives down all sorts of cables and this one can accept most that you'd come across in a professional environment.

Most importantly, it accepts SDI. All flavours of it, right up to the 6G variant of it which is designed to carry 4K signals and 16 channels of digital audio. There's AES/EBU on an XLR socket for industry-standard digital audio, and there's a pair of analogue XLR sockets for stereo balanced analogue audio. Finally, there's a pair of Phono (RCA) sockets, which are, of course, a consumer phenomenon, but, believe me, can be extremely useful if you don't have any other connectors. With the right cable, you can plug your iPod in.

Omitted is any sort of SP-DIF input, either optical or electrical, but if you do have to get SP-DIF into the device you might be able to use an adaptor cable to feed it into the AES/EBU socket - because the main difference between electrical SP-DIF and AES/EBU is that the former is unbalanced and the latter is balanced, give or take a few status bits. Not a big issue: when was the last time you saw SP-DIF in a TV studio?

An audio output would have been good as well. There are times when it's useful to be able to de-embed audio from an SDI signal.

But these are quibbles because the BlackMagic Audio Monitor is what it is and it does seem to be very good indeed.

The build quality is high and it certainly looks credible. There's nothing about this that says "cheap" and quite a lot that says "pretty expensive", which it isn't.

The built-in video screen is very handy but may be a little small to check lip-sync: but then, what do you expect in a single-unit device? What you certainly can do is verify that you're getting the right audio signal with your video. And don't forget Blackmagic's Smart Scope Duo - if you need bigger screens and video waveform monitoring too.

The built-in bargraph audio meters are big, bright and can be seen across the room. The calibration marks on them are very small and dark, but that's not the point. This unit is not for measuring or calibrating; it's for confidence monitoring. You want to be able to see that there's a signal there, and whether it's too loud or too soft. The meters are ideal for that.

And so to the sound.

Well, what would you expect a 1RU audio monitor to sound like? Tinny? Boxy? Struggling to be heard? Distorted?

It was absolutely none of those. It was clear, undistorted, balanced and punchy. There was even some bass - not earth-moving, but distinctly audible in the mix. This box isn't going to perform miracles but what it will do is deliver audio that is genuinely representative of a high-quality TV.

And it is loud. Only halfway through my tests did I realise that what I thought was the maximum volume - still pretty loud - was actually only about half way up, because my source at the the time was my Macbook Pro, which had its own volume turned down. A quick glance at the meters on the Audio Monitor confirmed that the input signal was low. When I turned it up, my first instinct was to look around the room to see where else this big sound could be coming from.

I tried a wide variety of audio, from dubstep to Vaughan Williams, and except when I looked directly at the unit, nothing about it would suggest that the source of the sound was a tiny 1RU device. What's more the integrity of the reproduced sound was such that it even highlighted a problem with room accoustics with a talking-head video.

Don't be decieved by those small speaker grills on the front of the chassis: they're ports through which an enourmous amount of air is shifted. You can actually feel it by putting the back of your hand towards them.  What you can see when you look closely at those ports is a small tweeter just behind the outer half of the grill and then a space for the bass to come through. Visible in the background is what looks like the magnet of one of the two sub-woofer drivers.

Overall I would say I'm really impressed by this rackmount audio monitor. It ticks all the important boxes. It's got a wide range of inputs (and with 4K capability it's not going to go out of date anytime soon), it has highly-visible meters, it's simple to use, and it sounds great. It would have been so easy to make an audio monitor that skimped on any of these features, but they're all there. This is a class of device it never occured to me I might need. But having used it, I'd say it's a very useful addition to anyone's toolkit.

The Blackmagic Audio Monitor is available now for $1,495