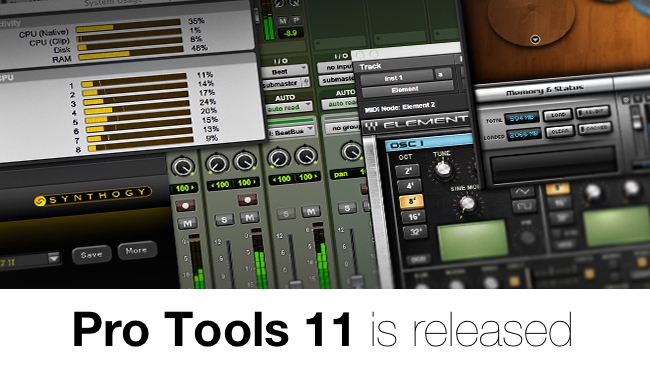 Pro tools has been around since 1991, a time when doing any sort of digital audio editing was a technical challenge. The most you could expect was to play back a few tracks, and there were absolutely no real-time effects or processes (apart from volume!) at that time. Now, an important new version is released

There were several plucky competitors around then. Soundscape, SADiE (yes, it is spelled like that) and Spectral Synthesis not only all shared the same initial letter, but were "affordable" digital audio workstations that were widely adopted, and did a good job in the face of much more expensive competition from the likes of the AMS Audiofile and the New England Digital Synclavier (which most people think of as a keyboard instrument, but which evolved quickly into a fully fledged DAW, although it was the only one that you could also produce tracks like Frankie Goes To Hollywood's "Relax" on).

Most of these names have disappeared now, the victims of software-only applications that take advantage of the sheer power of modern PC and Mac processors. Meanwhile, DAWs have encompassed MIDI and all aspects of music production, as well as incorporating third party plug-ins that have made their capabilities seem almost open ended.

Pro Tools is a survivor

Pro Tools has survived the carnage caused by software-only applications, probably in part because it has always relied on its own dedicated hardware for I/O and for audio processing. This has always made sure that performance is stable and consistent, which above all else is what matters in a commercial studio environment.

Another thing that has kept Pro Tools strictly in the hardware domain is that it has had extremely good control surfaces. In fact, for many users, the Pro Tools control surface *is* the studio. The fact that Avid acquired Euphonix, who were themselves experts in control surface technology and ergonomics has almost certainly helped Pro Tools to maintain its lead in professional studios.

And then there's the software

With over twenty years of continuous development, it's perhaps surprising that there's much left to improve, but version 11.0 is a major upgrade by any standard, not least because it is now fully 64 bit which will remove any effective limit on the amount of RAM that can be used. The audio and video engines have been brought into line with the rest of Avid's products for easier project and file exchange — with HD video playback of a wide range of video formats direct from Pro Tools' timeline.

A completely new feature — offline Bounce To Disk - speeds up the output of mixes without compromising accuracy.