In Pursuit Of Excellence: The RØDE Microphone Story 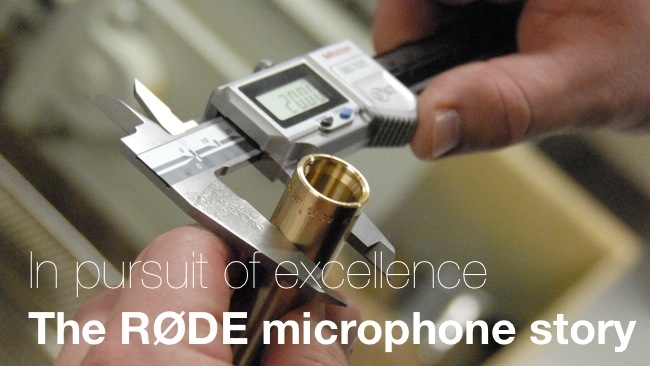 Replay: This is one of our older articles, so some info may be dated. However it offers a fascinating insight into the company. Craig Marshall visits RØDE's headquarters in Sydney for RedShark and finds out what it takes to make high quality microphones that sell worldwide

Peter Freedman is a man who knows his microphones as well as his motor cars. Twenty six years ago in Sydney, a young Swedish born school boy with a keen ear for sound worked alongside his father, helping out in the family audio business. During the 1950s, it took the German manufacturer of quality sound equipment Neumann, three years to sell a thousand U47 microphones. One to each of the world’s best recording studios. Individually hand-made, they still sound wonderful but they were labour intensive so very expensive.

Australia’s 1960s post war boom saw Henry Freedman’s audio consultancy design and install high quality sound systems in clubs and pubs right across the country. The business prospered but as the 1980s dawned, the phone kept ringing for Peter who only worked there at weekends and school holidays. “As I began to take on a managerial role in Dad’s business, customers wanted to talk with me,” Peter remembers. “Before long, our own people kept calling me: sales, service, they all wanted me. I couldn’t get any work done. It was insane. When I eventually took over from Dad, it became all about me so I knew I wasn’t going to get anywhere that way!” Throughout the ‘80s, the business began to grow. As Peter reflects: “Back then, like many fathers, I used shoot my son’s football match with a great big clunky video camera. The picture was crap but the sound was even worse so I looked around for an affordable microphone to improve the audio. All I could find were big shotguns or crappy little dynamics that didn’t sound any good. I couldn’t find one so I made one, it sounded great so that’s when we started the Rode Video Mic project.” 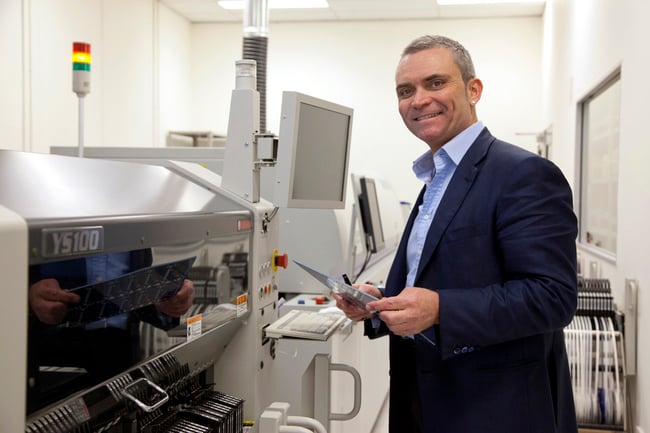 Those ‘hand-made’ days of Neumann’s U47 microphone are now virtually a thing of the past as recent years have witnessed a gradual ‘democratisation’ of the sound, film and video industry. This has been driven by the release of low cost, mass produced equipment like portable DAT recorders and more recently, the ‘DSLR Video Revolution’ where companies who traditionally produced ‘still’ cameras, began adding HD video recording features. Consequently, many opportunities have presented for enterprising businesses to expand into that growing and demanding market.

Positioned conveniently on the banks of Sydney’s Parramatta River, Rode Microphones is now surfing the crest of a wave of popularity, re-ignited by that most recent Revolution. The casual reader need only to browse the dozens of on-line video forums to find the words ‘Rode Video Mic’ embellished with lavish praise. “We now own that space” said Peter.

With so many Australian companies preferring to save on labour costs and contract out production to China, Rode have bucked the trend and continue to produce all major products on-shore. Over 120 Australian and international staff design, engineer, hand-assemble and test each and every Rode Microphone. “A massive investment in state of the art SMT and CNC machinery has allowed us to remain competitive, even in the current climate of high labour costs” said Peter. “Initially, China produced the components to our design and they made them very well. We imported the parts then assembled and tested each microphone here but I could see that very soon, we would have serious competition as they (the Chinese) realised that if we could do it successfully, so could they.”

A common theme behind the growing wave of successful Australian entrepreneurs is their ability to think laterally. Like Grant Petty, CEO of Blackmagic Design who recently wowed the digital cinema world with new and exciting camera product at NAB, Peter Freedman is a man with an endless quest for innovation and the quiet pursuit of excellence. “I have so many ideas in the pipeline,” he said “I’m tingling with excitement!”

One recent innovation which certainly excited both the audio and mobile phone market is the Rode iXY microphone. This is a miniature stereo condenser pair in ‘XY’ configuration designed to clip into the top of an Apple iPhone, turning it into a broadcast quality location sound recorder. “No other similar device records at 24/96 resolution” said Peter. “It’s a world first for iPhone. We fought hard to gain Apple MFI certification so our device is fully compatible but we design and build our own preamps with great A/D electronics but to make the product complete, we bought a software application from the US to control it all.” Peter explained: “Apple makes the best system for audio. Android does not work that well, in my experience, for audio so we’re firmly aligned to Apple. We’ve spent a lot of time and money designing then debugging it to the point where it really works.” There’s also smartLav, a clip-on lavaliere mic for the iPhone and soon there will be a full range of accessory products from Rode which will turn the once humble mobile phone into a complete production tool.

Having once run a busy television commercial production facility, I know how difficult it can be to manage a fast expanding business. I asked Peter whether he still controls the entire operation himself or if he had some great lieutenants on the job: “I now have some of the finest audio and acoustic engineers in the world working here in Sydney” he replied. “Unless you want to remain a control freak, it is essential to surround yourself with the best people in the business. As Rode Microphones has expanded, I’ve needed to learn how to manage people and systems”. Peter explained: “How do you qualify things so you don’t make mistakes? Shortening the R&D period is one thing but it really comes down to detailed briefs, testing and finally, managing human beings so they’re happy. As your business grows, the systems you require are nothing to do with technology. It’s all about people. I’ve got electronics, acoustics, service, manufacturing, shipping, I’ve got accounts, I’ve got all this machinery and all these different people. We split it into teams each with a leader so I’m overseeing the various department heads and now, it works well.” 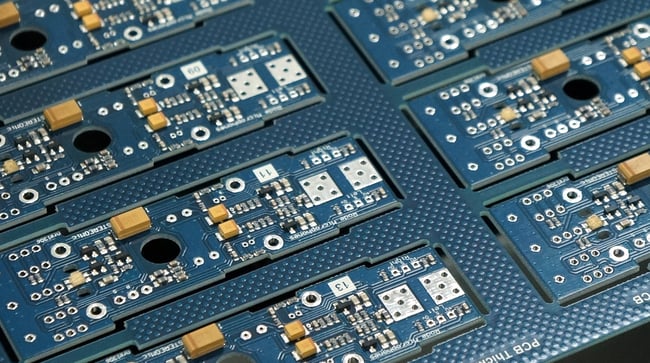 As we commenced our tour of the Rode workshop assembly floor in the multi-level Silverwater factory, Peter took me into one of several dust proofed rooms. I could tell he was particularly proud of all the intricate machinery on display: “Here we manufacture our own transformers”, he beamed. “If an accountant ran this Company, this would never happen! There’s probably a quarter of a million dollars worth of the finest Swiss core laminating and coil winding machinery in here and this is the only way we can produce these amazing audio transformers. I just want them. So I make them.”

Peter picked up a miniature audio transformer destined for one of Rode’s high end studio microphones and said: “This is the equivalent to a $500 hand-made transformer: the frequency response is 5 Hz to 200kHz! The raw material costs are low, just a few dollars even though we use mu-metal cores which need to be annealed at just the right temperature to give these amazing magnetic properties. Everybody else who makes quality audio transformers hand winds them. That’s why they’ve always been so expensive. The only way we can make unbelievable quality at such low cost is by having all this machinery.”

Next, Peter steered me into the SMT room. Here, several million dollars worth of state-of-the-art Surface Mount Technology was producing the pre-amp boards for Rode’s Stereo Video Mic. “Some people say you cannot make great audio pre-amps using surface mount technology. That’s just rubbish. The people who say it cannot be done don’t have the money to buy this machinery! Do you think if you opened up a two million dollar mixing console, you’d see individually hand wired parts? Ridiculous! A well designed SMT audio board has far less unwanted inductance without those unnecessary wires and pigtails all over the place. These SMT ovens are computer controlled, temperature controlled and humidity controlled. I can go to the computer and tell it what board I want to make. Next we load up a thousand boards and it selects the parts, solders the parts, checks the connections then prints a report”. 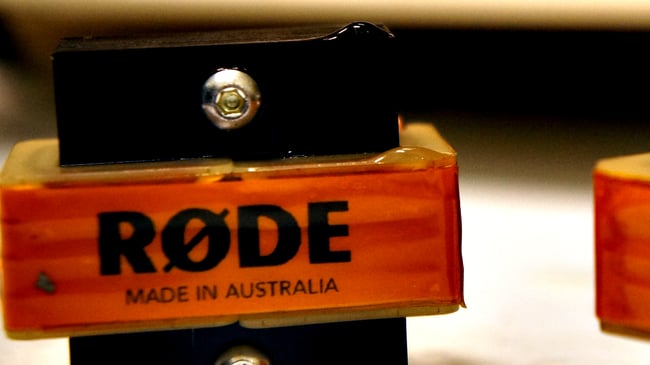 Reliable, repeatable, computer controlled mass-production all run by the best people in the business has been the secret to Rode’s commercial success. Rode Microphones is now the biggest manufacturer of professional microphones in the world with an export market exceeding 95% of production. “We build and ship over 130,000 professional models and 200,000 accessory parts annually, through more than four thousand dealers” said Peter. Over the years, Rode Microphones have won numerous Australian International Design and Export awards including the coveted MIPA, considered the ‘Grammy’ of the professional audio industry.

Finally, I asked Peter if Rode ever manufactured audio components for other Companies. “I could” was his quick reply and still holding that little audio transformer, he turned to me and said: “If I made you a pre-amp with this transformer and some other high end components, you would say: ‘I can’t use anything else!’ It would be so open, so clear and so clean everything else would seem second rate.” Well perhaps you should, I mumbled. I’d certainly buy one.

Oh by the way, I hinted at the top of this story that Mr Freedman’s appreciation for precision machinery also ran to motor cars. Peter’s current driving passion is a 599. Not just any 599 either, his GTB Fiorano has been fitted with the HGTE suspension upgrade. Ouch!