Forbidden Planet was a landmark in film scoring 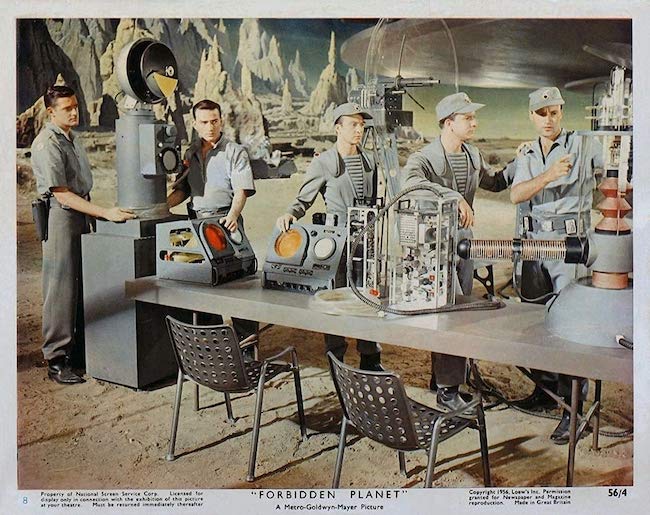 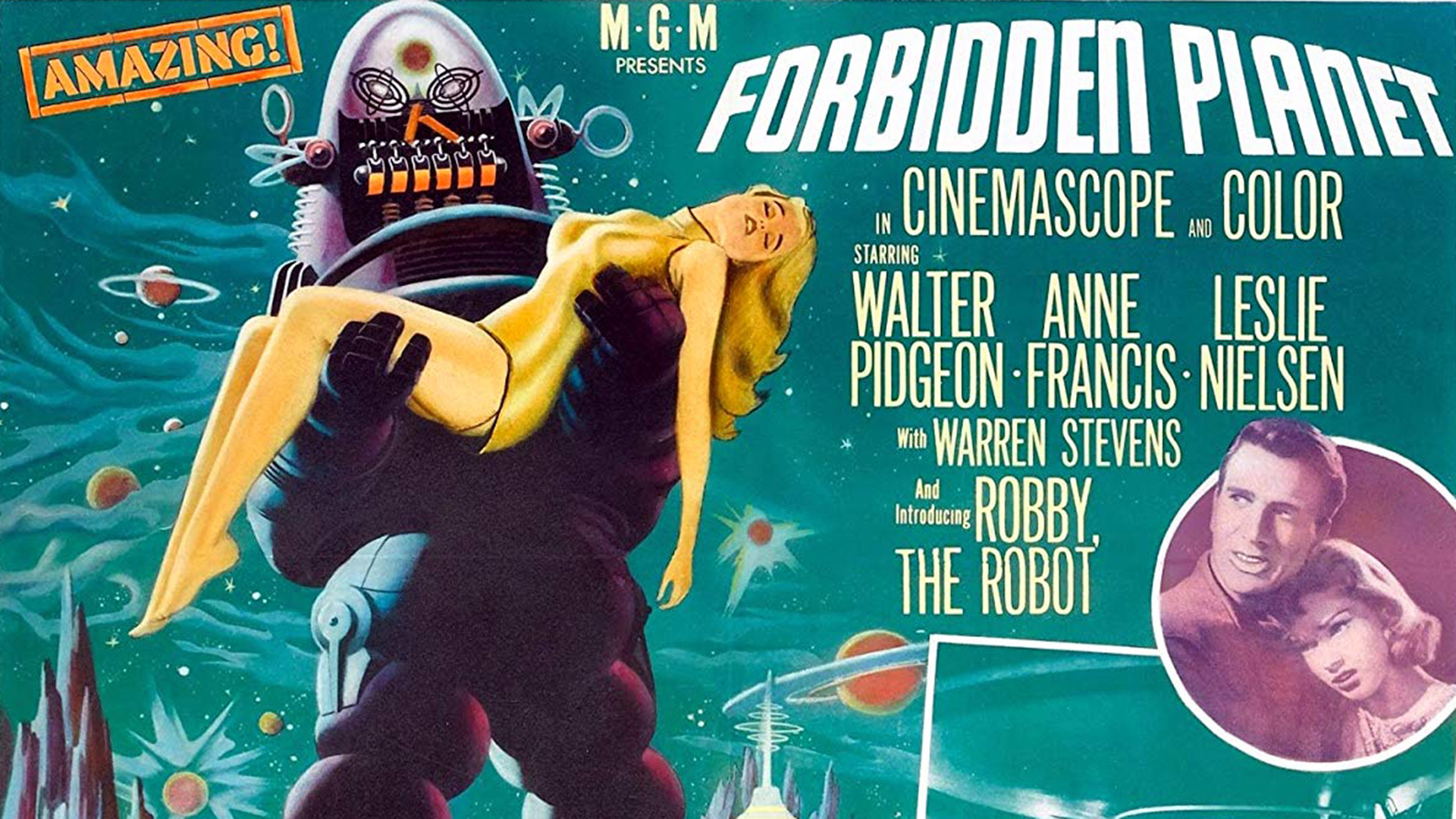 The Forbidden Planet might look dated now, but at the time of its release it was truly revolutionary, not least because it was the first film to use an entirely electronic sound score. Kevin Hilton tells us the story of how it came to be.

Synthesisers are now accepted as legitimate instruments for popular, experimental and even orchestral music. They also have had a particularly profound influence on film soundtracks. But back in the 1950s when electronic music, based on the precursors of the synth, was emerging it was treated with suspicion by many in the musical establishment. Filmmakers, on the other hand, saw its potential, which is why director Fred McLeod Wilcox was keen to try out the 'new' genre on his 1956 science fiction saga Forbidden Planet.

Partly inspired by Shakespeare's The Tempest, Forbidden Planet is set in the 23rd century when scientists and colonists from earth have travelled to far-flung parts of the solar system. Commander Adams (a young Leslie Nielsen in his first film) and his crew are sent to the planet Altair IV after contact is lost with its inhabitants. The sets, production design and special effects (which were nominated for an Oscar) went a long way in creating this far-off world but it is the sound that takes it beyond the realms of what the audience would recognise.

According to cinema legend, MGM approached several composers and audio-related people to work on the film. Among them was the avant-garde composer Harry Partch, a music theorist who also adapted existing instruments and built his own. Also attached to the project at the same time were Louis and Bebe Barron. Both had studied music at university but as a team, they began to experiment with electronics and recording after being given a tape machine as a wedding present by Louis' cousin who worked at 3M.

The Barrons were initially invited to contribute roughly 20 minutes of sound effects and electronic pieces to Forbidden Planet (which runs for one hour and 38 minutes) but took over the entire soundtrack when Partch decided not to continue. Influenced by the concept of cybernetics, which states that some natural laws of behaviour apply to both animals and electronic machines, Louis built circuits that were able to generate sound. In this way, he and Bebe produced what was the first full electronic soundtrack for a film. 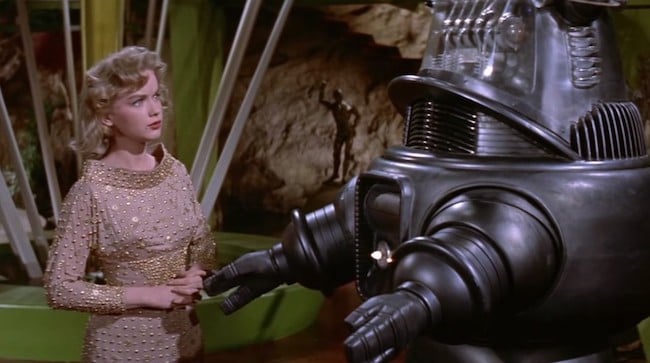 Among the resultant devices was a ring modulator which produced patterns of sounds that, because they were unrepeatable and the circuits often burned out through use, Louis and Bebe recorded and then manipulated. To produce different effects they added reverb and tape delay, as well as speeding up or slowing down the tapes. The results are still disconcerting and disorienting today, so it must have been almost alarming to cinema-goers seeing the first showings of Forbidden Planet.

The 'tonalities', as they are described in the credits, begin under the MGM Lion roaring, beginning with extraterrestrial chords that merge into a spinning propulsive sound matching the appearance from behind the audience of a flying saucer. These are effects, but become more recognisably musical as the title fades, with something much like a big rising thematic stab.

This mixture of effects and more structured pieces continues as the action switches to inside the spacecraft where the crew is preparing to go below light speed. Strangulated klaxons morph into a scene-setting theme as the crew prepares to land on Altair IV, despite the protestations of Dr Morbius (Walter Pidgeon) who speaks to Adams on a radio link. The journey to the planet surface is accompanied by descending, burbling tones with twirling sounds that mirror sand being blown about as the ship's thrusters come into action. 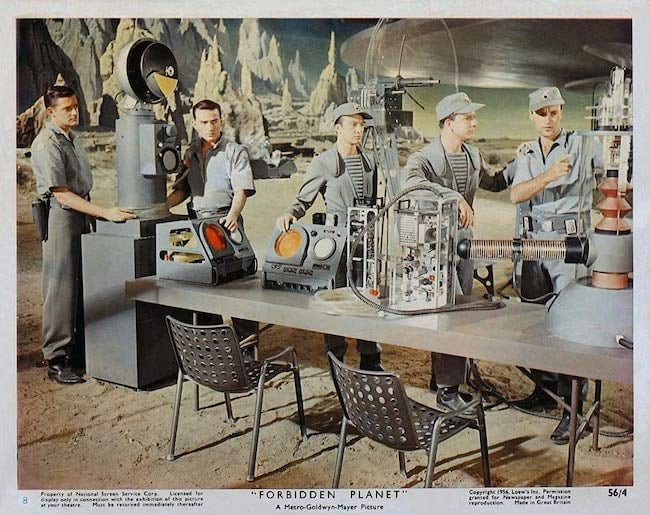 As Adams and his senior officers survey their new surroundings, a dust cloud is spotted, accompanied by chords that herald the arrival of Morbius' mechanoid servant, Robby the Robot. This bulbous creation is quite retro for the 23rd century, with conventional sound effects rather than electronic ones for its servos, including something that sounds like an adding machine as it computes responses.

Adams, Doctor Ostrow and Lieutenant Farman travel to Morbius' compound, where they find that the Doctor and his statuesque daughter, Altaira (Anne Francis) are the only survivors of the colony. Their house is absolutely silent with nothing coming from outside, either. This is shattered when Morbius brings down the window shutters with a stereo bang, a sign that he is trying to keep something terrible out. The naive Altaira has only had her father, Robby and some recreated animals for company; when she walks in the garden, the tonalities become sombre and almost mournful, due to note bending.

The threat Morbius is trying to keep at bay manifests itself back at the ship encampment. An invisible menace makes its way past the guards, with only slow, sinister, looped tones to inform us of its ill intent. In this first incursion, the presence merely boards the ship and then leaves. Later, it destroys a machine being built to detect it and kills the chief petty officer. As the attacks increase, the soundtrack rises in pitch and tone, with tension set by slow, plodding blips. When the threat is caught in a force field, ascending, alarm-like tones sound, punctuated by the crackly, strobing effect of the crew's disintegrators. 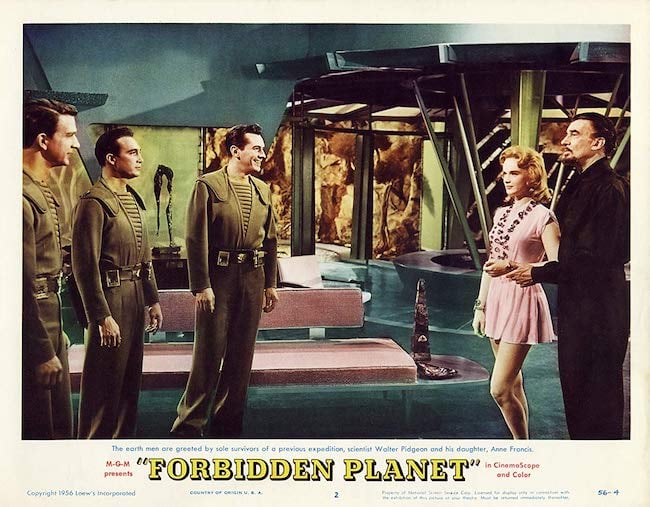 Adams realises the so-called Monster of the Id is Morbius' dark side made real, released through technology created by the superior beings that inhabited the planet before humans arrived. Adams seals himself, the unconscious Morbius and Altaira in the laboratory, watching in horror as the doors melt while the Monster attempts to break in, as plonking sound effects underpin its efforts. With Morbius dead, Adams, Altaira and the remaining crew escape the planet which is destroyed, the solar flare sonically represented by an electronic ripping sound.

Forbidden Planet is undoubtedly a landmark in science fiction cinema, even though it has not aged well. The story is fairly perfunctory and much of the acting wooden and stilted. Settings are conspicuously studio stages with backdrops or matte painting, although some of the visual effects are still impressive. Its real legacy, though, is the soundtrack, even if it does wear thin after a while.

The Musicians Union forced the producers to use the term 'tonalities' instead of music but despite that and the Barrons themselves saying their compositions were not music, the sounds created by ring modulators and tape machine manipulation provided both scene-setting effects and musical colouring that still sounds out of this world.