Deity Connect Radio Mic: A dual channel wireless system for a lot less than you might think 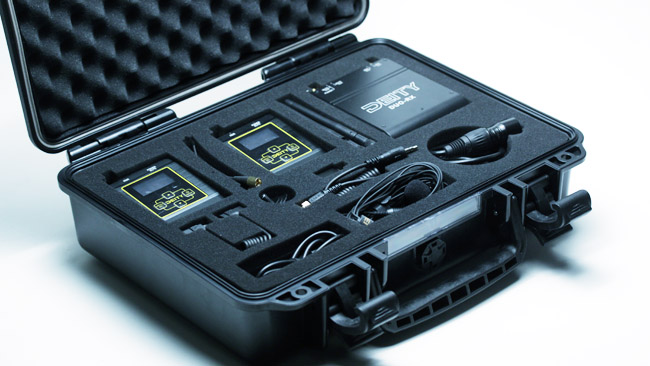 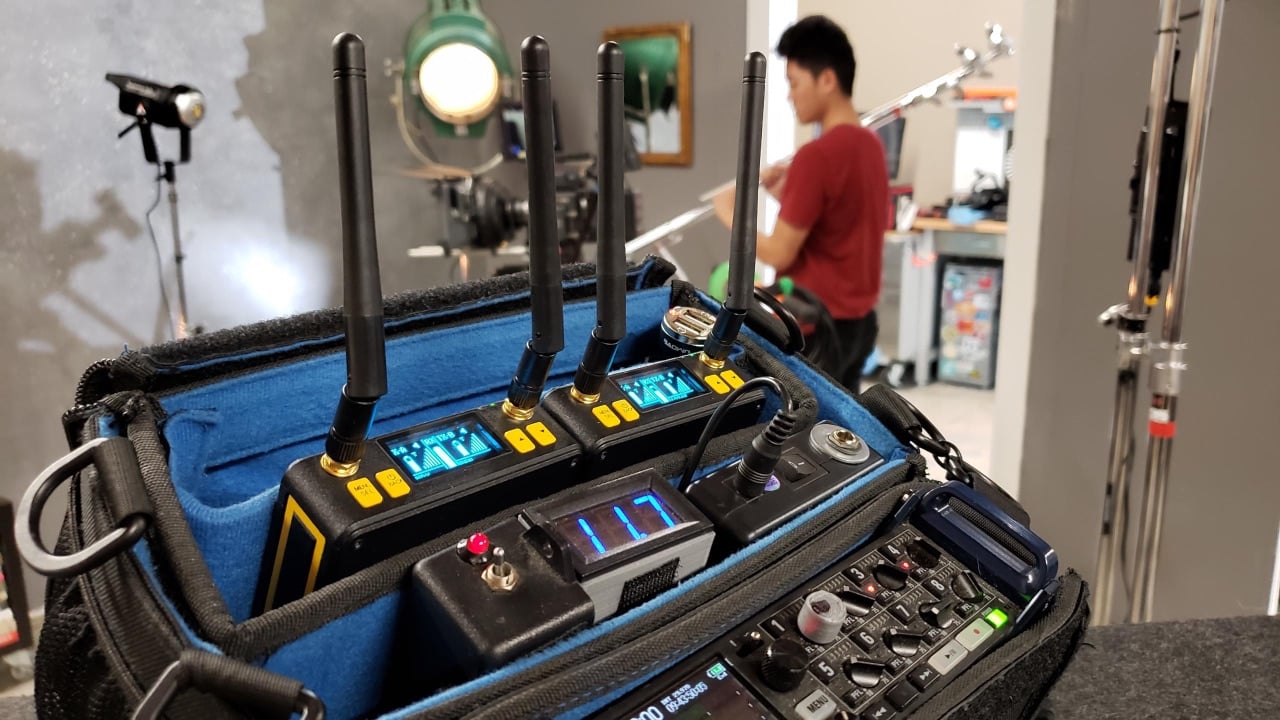 Review: The Deity Connect radio mic system would appear to represent great value for money. Phil Rhodes takes the system for a spin to find out how it performs, and whether the 2.4GHz frequency is a help or a hindrance.

Deity is a young audio equipment manufacturer, but it already established a good track record. The first mic, released when the operation was under the Aputure banner, competed with the likes of the Sennheiser MKH-60 and reviewed well in early 2017. Deity, then under its current name, took a more direct shot at Sennheiser with the S-Mic 2, which is a pretty accurate reimplementation of the world's de facto standard shotgun. There are factors other than performance which affect purchasing, naturally, but Deity's equipment has so far been very respectable.

It's a dual-channel system, supplied in a case with two transmitters, two lavalier microphones and a single receiver unit containing two separate radio receivers, each of which enjoys true dual diversity with internal and external antennae. The most critical part of the specification is that Connect is a 2.4GHz system, something that has complicated implications. 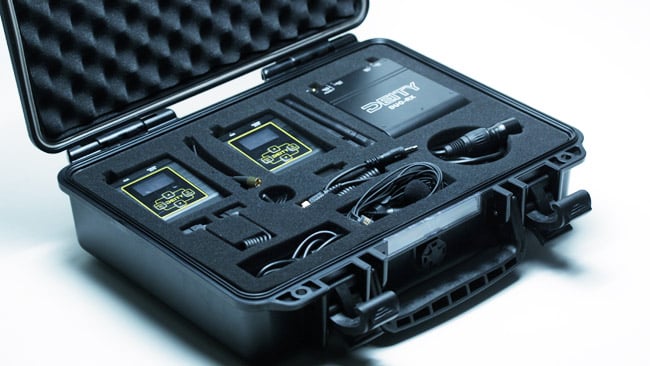 Two channels of radio microphones for under US$700. It's a tempting prospect

2.4GHz is in the instrumentation, scientific and medical band where Wi-Fi, Bluetooth and various other things also live. It is largely licence-free internationally, which makes the user's life easy. It also makes Deity's life easy, with only one version of the device to create which can then be sold worldwide. It also means that things can get busy and while many of the technologies which operate in this band will automatically change frequencies to avoid interference, with several such devices operating in the same locality, the situation can become complicated. 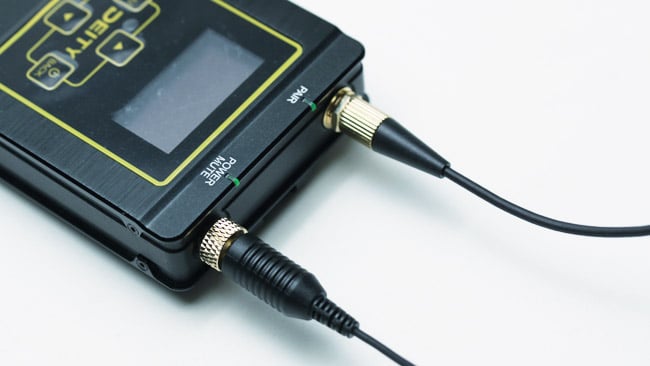 Happily, Connect seems to be a determined attempt to make 2.4GHz reliable enough for professional use. It has a comparatively high transmit power up to 100mW, a fairly straightforward way of improving performance, but at some point, there is no substitute for shouting louder. Other 2.4GHz systems languish below 20mW. Second, and perhaps most significantly, Connect is itself capable of hopping frequencies to find some clear air and does so continuously without user intervention. This is in contrast to many UHF designs which might allow the user to scan for a quiet frequency, but then require manual rescanning and frequency selection if the original one gets busy later on. The frequency hopping has been done before, but not often in conjunction with the higher power and perhaps not so well. 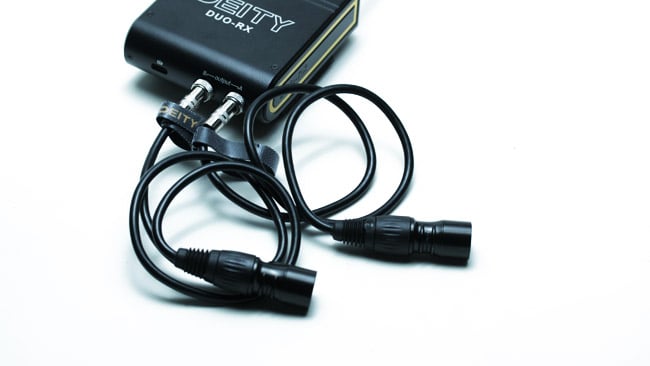 Perhaps most significantly, Connect is a digital radio mic system which has been engineered not to be too concerned about latency. This means that it can store and then transmit fragments of audio as packets and retry a packet up to three times if it isn’t received intact. This means that the system might not be suitable for use in, say, live music, where the 19ms delay would create phasing issues, but for film and TV work it's a sensible engineering choice. Many recorders can trim out that sort of delay, even if it's an issue.

This approach does mean that the device we think of as the receiver also transmits (and the transmitters also receive) telemetry information; they are both strictly transceivers. This may complicate the legality of using high-gain antennae, which would usually be an easy decision. The devices use a standard antenna connector and antennae for Wi-Fi use are widely available. The supplied antennae have only 3dB of gain, but it's not clear how easy it would be to exceed legal EIRP with bigger aerials, even on the “receiver.” 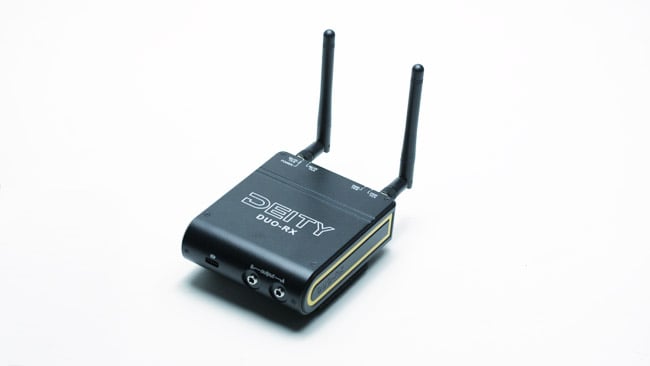 About the only other concern with the innovative radio design is the fact that the relatively high output power might drain batteries quickly. It will optionally throttle back automatically if the signal is good and can be set to a permanently low level. One slight glitch is perhaps the fact that the batteries themselves can't be replaced in the field. A quick fast-charge with a (not included) USB power supply that's compatible with the fast charging protocol will refill the tank in a little more than an hour, according to spec, and the company says it will last ten hours at maximum transmit power, but some people would prefer to throw some AAs in there.

Physically, the Connect package seems well-made. Things have been beefed-up (and made much, much less yellow) since the initial public showings. The microphone inputs use standard locking minijacks and so do the outputs on the receiver. Adaptors to XLR are included. The receiver is designed to be mounted in a variety of locations, including the accessory shoe on a DSLR, and there are 1/4” and 3/8” threads as well.

The Connect package is clearly intended to work for everyone from DSLR users to broadcast camera crews and the receiver supports a variety of output modes. The 3.5mm stereo minijacks can each, optionally, provide unbalanced stereo or balanced mono outputs with variable gain. Around the time of writing, Deity released the 1.1 firmware update, adding more microphone gain on the transmitter, optimising noise in XLR output mode and a few other tweaks. The feature set is already reasonably complete and shows some nice attention to detail in that – for instance - the limiters are implemented in the analogue domain and there's encryption to avoid transmitting the script of one's billion-dollar masterpiece in the clear. 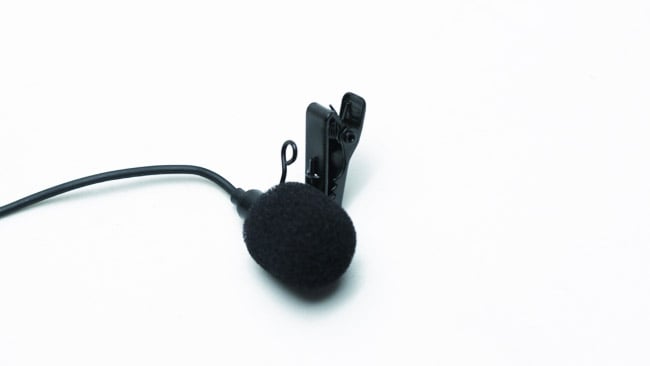 So, to address the clearest concerns first, does all this technology serve to mitigate the potential issues of 2.4GHz? It's always difficult to be specific about the reliability of radio gear since the interference environment is infinitely variable, especially on a film set, and anything can be interfered with. Still, in a typical suburban setting with several Wi-Fi networks detectable, the range was perhaps 80 or 90 feet through a few walls, which is perfectly respectable and, frankly, pretty similar to what some rather expensive UHF options have achieved in the same location. Operating one channel only seems to improve range and reliability, exactly as we'd expect, since it frees up radio frequencies. For more channels, there's a datalink cable to allow several receivers to talk to each other and coordinate their frequency-hopping efforts.

If you don't like the lavalier microphones that are supplied, it's naturally possible to substitute others. Evaluating microphones, and by association, the preamps in the transmitters, is like wine tasting – a rather politicised matter of opinion, so we'll avoid it. Certainly, the whole system sounds clean with well-controlled loss of high frequencies when used off axis (no microphone, even lav mics, are perfectly omnidirectional). The digital radio link itself is naturally crystal clear; it's either perfect or muted, as is the nature of digital communications.

To some extent, the Deity Connect is a good example of how radio telecommunications have changed in the last decade or two. Services including Wi-Fi and cellphone networks are increasingly expected to automatically manage their own use of spectrum to avoid interference and most radio microphone systems are a bit of a throwback in that regard. The reliability mechanism implies a certain amount of delay and there will probably always be a need for UHF with its increased penetration and resistance to multi-path interference in situations such as live music. In the world of programme-making, though, the design makes perfect sense. It would perhaps be nice to see a digital audio output, given that it's a digital audio transmitting system, and the fixed internal battery worries some, but in general, it's hard to object to a price of $670 for two radio channels with this sort of performance.