There's a lot to like about the Zoom F8n, a very highly featured audio recorder 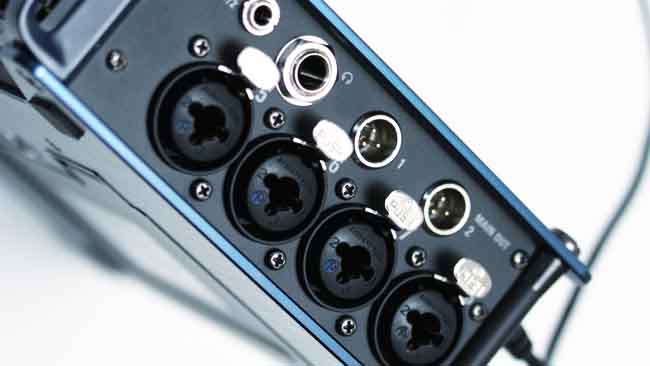 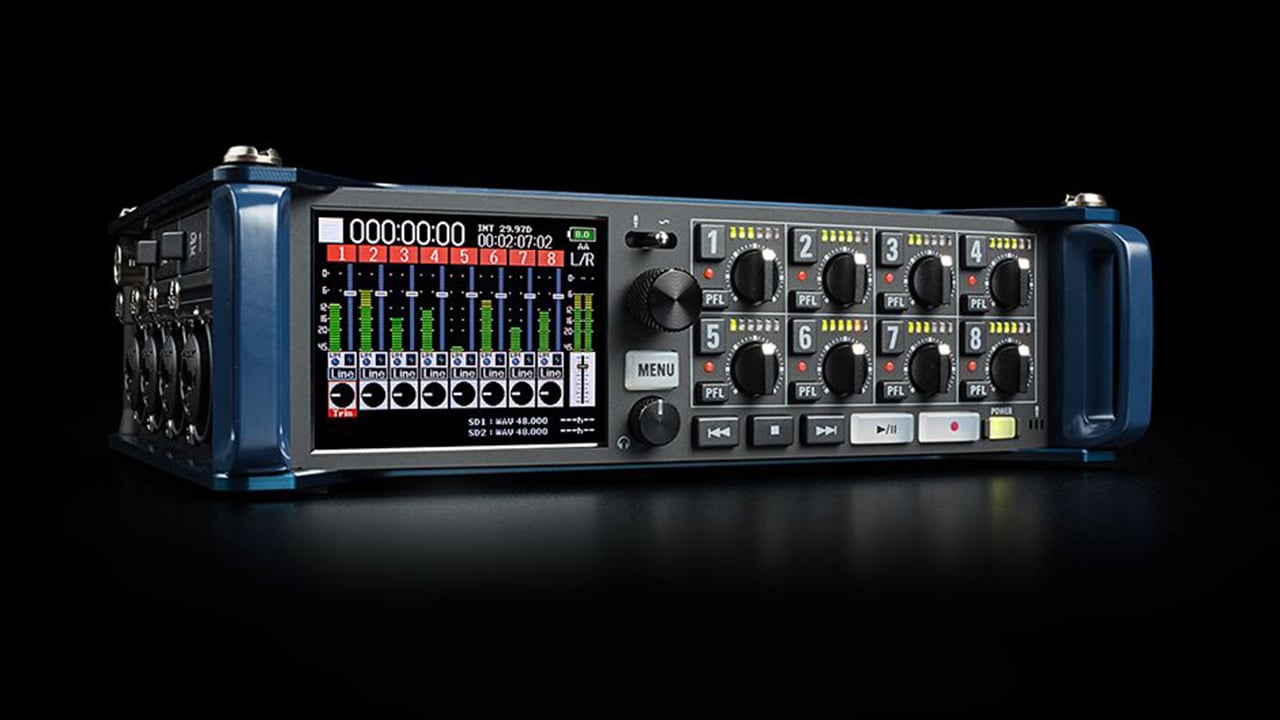 Review: Zoom's F8n audio recorder looks to be incredibly highly featured for its price and ideally suited to location work. Phil Rhodes takes one through its paces.

When Zoom released the F4 recorder, it had become clear that the company was interested in at least a bite of the high end. They'd been famous for years for creating the H-series recorders which coincided so neatly with the DSLR boom. That created a lot of situations in which dual-system sound was being considered by people who would normally use the camera's onboard audio without a second thought. Still, none of those recorders provided for things like timecode until the F4, which was formatted much more like a tool for audio people on drama. 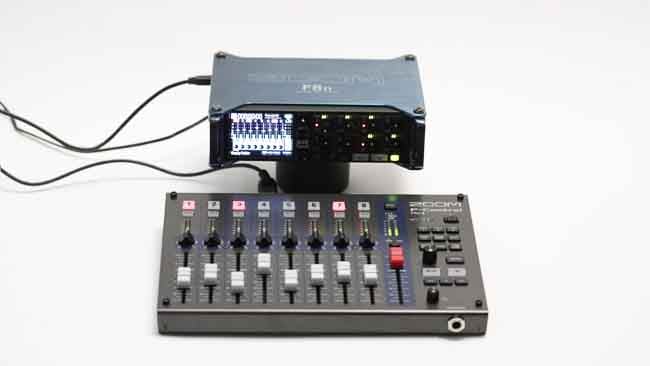 The original F8 was a fairly natural progression, given the tendency in modern drama to record everything six different ways, then pick the best later. The F8 packed a huge amount of inputs into a chassis that's even smaller in person than it looks on a website, and it doesn't look big on a website. The F8n we're looking at here is the same size - for the sake of scale, look at the four XLRs on each side. The original F8 was enticing, but suffered a few minor glitches – the outputs were at domestic level, and the XLRs took only mic level while the jacks took line, among other things. The F8n is intended to correct these concerns and makes a few other adjustments as well. 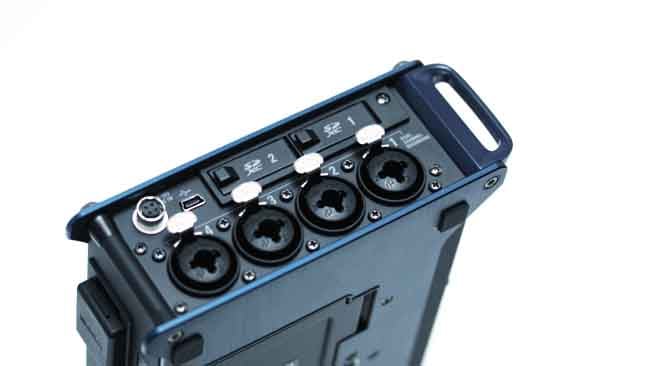 Also on show here is the FRC-8 control panel, which connects to the F8n via USB for both power (which the F8 couldn't supply but the F8n can) and data. An external controller is a common accessory, given recorders like this may be used either in a shoulder bag or on a cart, but it's especially useful on such a physically small recorder with such a high channel count. The F8n's front panel is perfectly reasonable, but there will always be a limit on how much room there is. Preamp level, for instance, is selectable via the menu control dial on the F8n, while there are separate preamp and channel level controls on the FRC-8. 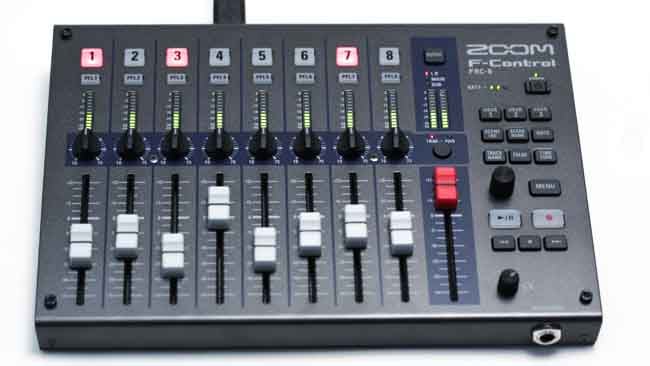 The F8n will record from eight inputs at up to 192KHz 24-bit to a pair of SD-cards as either a collection of mono files or one multitrack file, depending on what downstream software might do. There's an automix algorithm to keep the stereo mix reasonable, invariably to become part of an editor's copy later on, and some particularly good limiters which use a tiny ten-millisecond buffer so they can work retroactively and almost seem to have access to a time machine. In situations where only four tracks are being recorded, they can be duplicated onto the second four at reduced level, creating a safety recording in case of unhandled clipping.

There is timecode and three different ways of inputting power. One of the n-suffix updates is to the Hirose power input, which would tolerate up to 16V on the F8 but expands that to 18V on the F8n. Sounds trivial? Not if you want to run it from a 14.4V-nominal camera battery, which will exceed 16V fresh off the charger. The battery compartment is different to the F8, which took the eight AA cells in a holder that slid into the back; the F8n requires individual cells. It's arguably more fiddly and might not fit a bag built for the F8, but really, in a complex situation, who's going to be using AA cells? Well, perhaps as a backup – it'll switch automatically between power sources at predefined voltage levels. 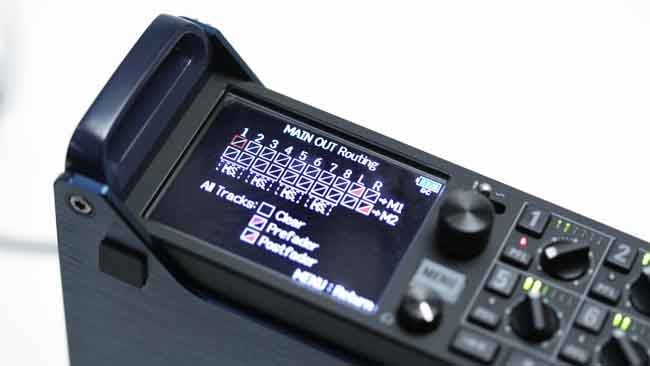 Another update is improved gain on the headphone output, with 100mW of drive available. Zoom tells us that the mic preamps have 75dB of gain and less than -127dB of noise, which is in line with the sort of numbers promoted by the competition. Another update to the F8n is that the combined XLR-jack inputs can both be used for either mic or line input, which means that things like radio mic receivers can go in on XLRs and won't need jack cables. There isn't any phantom power on the jacks, but that's fine; microphones will be on XLRs. Phantom power is individually switchable to each channel.

So, that's the hardware, but as with almost everything made in the 21st century, the functionality is more or less defined by firmware. There are stereo main and sub outputs, with the latter being on a 1/8” mini-jack for connection to domestic cameras; this output is optionally at microphone level. The main output is on mini XLRs, a clear concession to compactness. The user interface provides a matrix which allows the inputs and mix to be routed to the main or sub outputs either pre or post fade, which is handy for creating a feed for people on the set. The F8n enjoys optional -10dB or +4dB output level, an update from the F8 which offered only the -10dB domestic level.

If this sounds like a list of features, that's because a review needs to be around a thousand words and there are masses of features to talk about. Zoom has pretty clearly taken the approach of throwing in every feature they possibly could. As such they find themselves competing ably with the likes of Sound Devices, whose own 8-channel recorder, the 788, costs multiples of Zoom's pricing. Perhaps a more realistic comparison is with the MixPre series, such as the 6 or 10T. They're perhaps not really intended as location sound devices, though they'll do it and are attractive to ab-initio recordists as a more affordable way into a box with “Sound Devices” written on it. 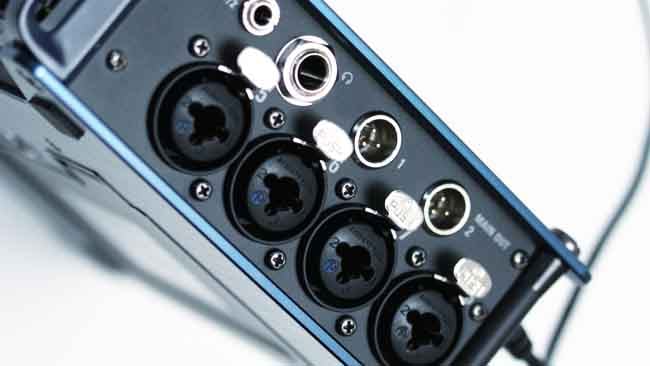 The right face holds inputs 5-8, the main and sub outputs, and the headphone jack. The jacks are bolted through the side of the metal case

The Zoom F8n more or less resolves these concerns; it's very competitive with these other options and much more intended as a tool for location drama and similar work. An Android version of the app would be nice, as would an AES input or two, but those are probably long shots. It's hard to complain about the way preamps sound without the conversation degenerating into terms like “warm” and “bright” as if they had any well-defined technical meaning in sound; they are certainly very quiet. Overall, the F8n already has more features than there's space to mention. Perhaps the best news is that the recorder is about US$1000, while the FRC-8 control panel is a mere $350. It's made principally out of metal, not plastic, it's affordable, and it's produced by a company that clearly listens to its customers. What's not to like?