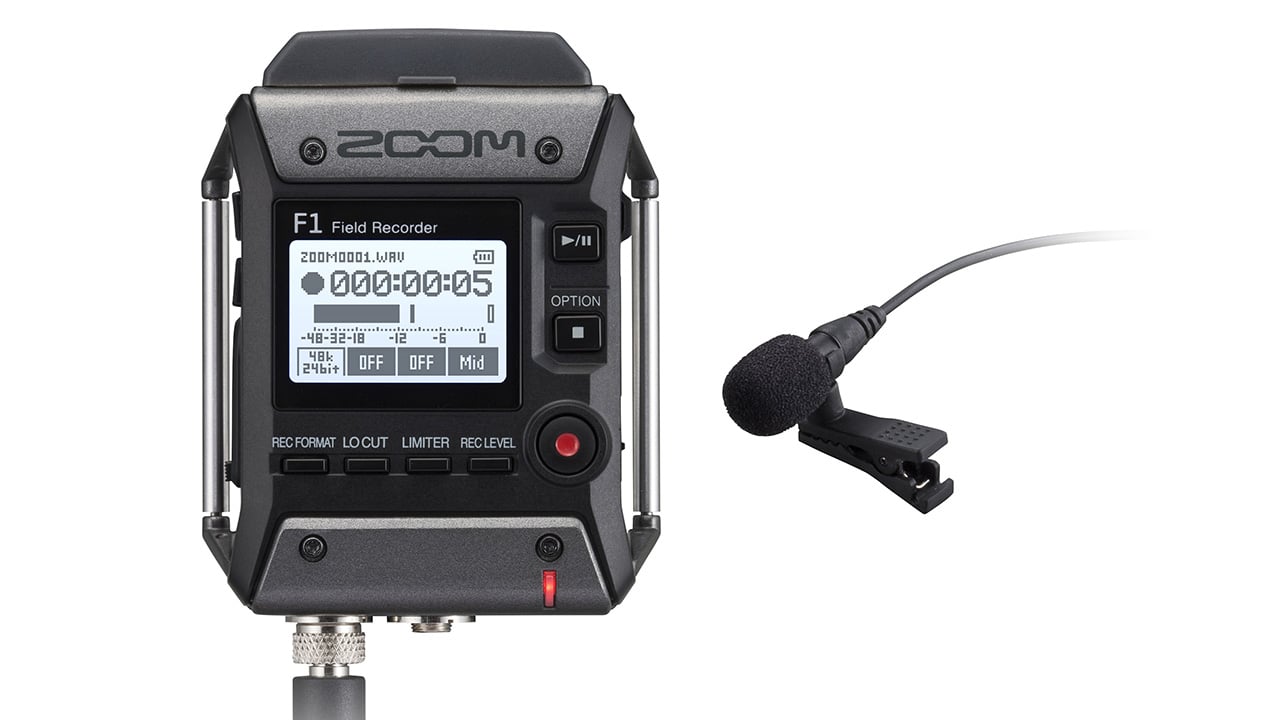 Roland Denning takes a good look at Zoom's matchbox sized Zoom F1-LP audio recorder, a recorder that can be used easily on small cameras, and as an alternative solution to traditional radio mics.

Zoom has a growing reputation for digital audio recorders. From the inexpensive H4 and H6 recorders, favoured by DSLR filmmakers, they have expanded to the impressively featured F4 and F8 four and eight-channel field recorders at very reasonable prices. The F1 is a much more modest recorder, available with a lavalier microphone for around £175/$200, it is a solidly made, matchbox-size wearable stereo recorder which can be used as an alternative to a wireless mic. There are obvious advantages and disadvantages to this – it is cheaper than a radio mic and you avoid wireless interference and going out of range, but you can’t monitor the sound as you are recording and you have to sync up your tracks afterwards.

There is established competition in this area: the similarly priced Tascam DR-10C is even smaller than the F1 and is marketed as a backup device to a radio mic (it has both mic input and output sockets) as well as being a stand-alone recorder. Both record to MicroSD cards. The Tascam is only a mono recorder but it has the advantage of recording a simultaneous safety track at -6db.

Another trick up its sleeve

The Zoom F1 has another trick up its sleeve: beneath a cover at the top of the unit is a proprietary 10-pin socket that allows you to use one of Zoom’s microphone modules – if you have an H4, H5 or an H6, you already have one of these. Modules come in six forms: two choices of x/y stereo pairs, M/S (mid/side), mono and stereo shotgun mics and a module that adds XLR inputs (sadly without phantom power). The Zoom is a more versatile recorder – the Tascam is intended purely as an on-body recorder for personal mics – but it lacks the Tascam’s pass-through option for use as a backup recorder. With one of the mic modules, the F1 is an ideal on-camera recorder for a DSLR, although the necessary dedicated shock mount only comes if you buy the F1-SP with the mono shotgun module. The shock mount is not available separately and there is no other simple way of mounting the F1 without it. The other option is the F1-LP which comes instead with a Zoom-branded lavalier mic and a belt clip. This is the version I am reviewing.

The mic inputs on the F1 are the familiar locking minijacks - the popular Sennheiser Evolution transmitter shares the same fitting. The F1 has nine mic level settings as well as an auto gain function and a limiter. It has a good range of formats from MP3 48k up to 24bit/96Khz WAV files. The F1 has a nice bright screen and functions are controlled easily by seven buttons which can all be locked off with a ‘hold’ switch. It’s good to see so many dedicated buttons on a unit as small as this, avoiding endless menu negotiation. Power is from two AA batteries or an external supply through a micro USB port. There’s also a headphone socket with adjustable volume. 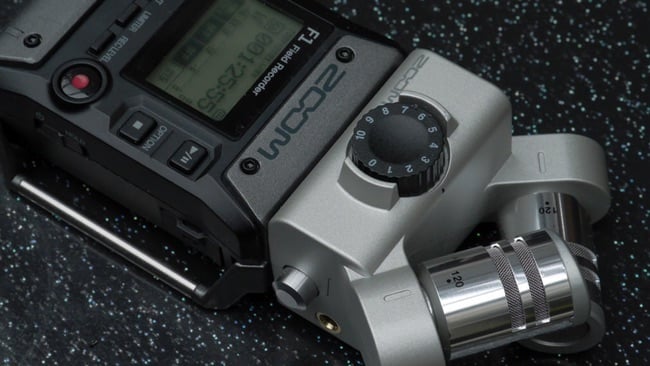 Since a decent lavalier mic can cost more than the entire F1 package, I wasn’t expecting much from the included microphone. In fact, it is not that bad but it has a rather muddied sound. I had better results with a Rode Pinmic, which worked fine, although my trusty Tram TR50 produced an output too low for acceptable results. The weak spots of many low-cost digital recorders are the mic preamps and the F1 needs to be paired with a mic with a strong output.

The recorder offers a low cut filter at 80Hz, 120Hz and 160Hz, and a limiter. Digital limiters are another area where low-cost recorders can fail – to get a recorder with an effective analogue limiter means paying a lot more money. The F1 has, apparently, a hybrid analogue/digital limiter, which lowers the analogue input by 10dB then adds an extra 10dB digitally, which it discards when the level is too high. This works well except that it raises the noise floor by 10dB – there is a noticeable hiss when the limiter is engaged.

All in all, a neat and well-designed miniature recorder which will give excellent results when paired with the right microphone. It would be good if it enabled a backup track to be recorded (perhaps a future software update will fix this) and if the shock mount (or any sort of mount) was available separately. In some circumstances it is a viable alternative to a radio mic and, paired with one of Zoom’s mic modules, it is a very compact, solid hand-held recorder, a vast improvement on Zoom’s original H1 2-channel recorder.