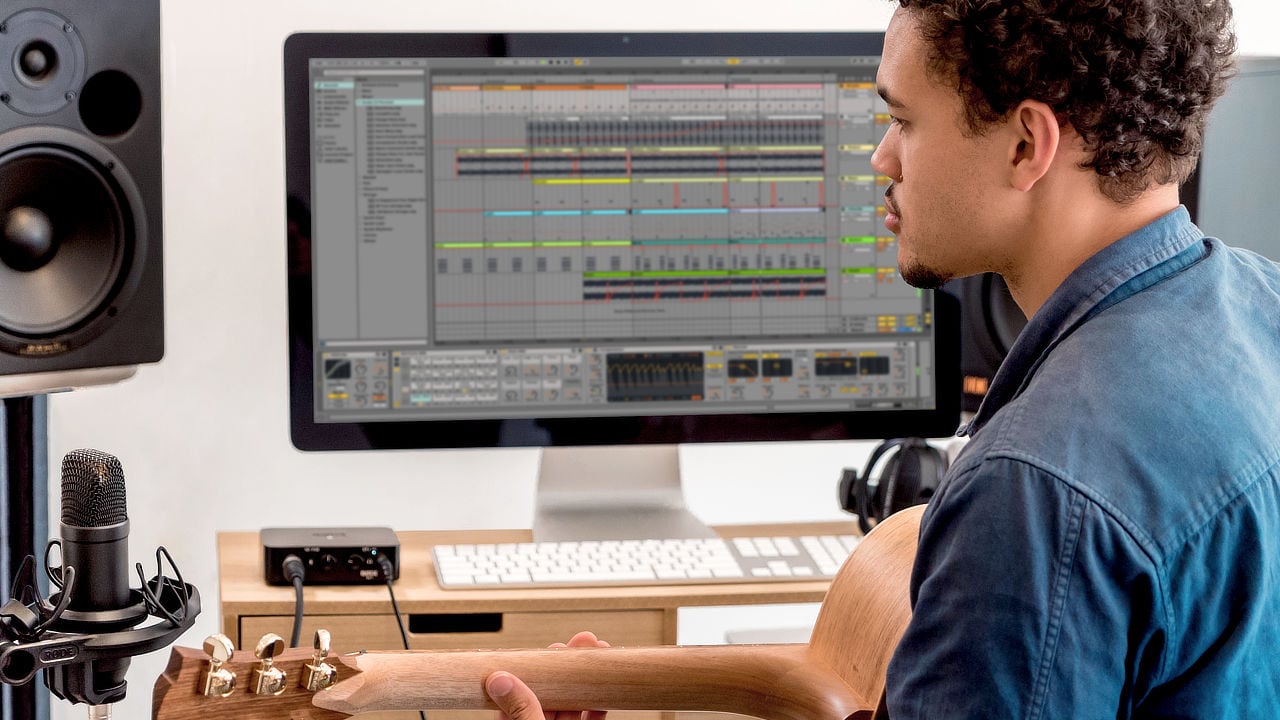 The AI-1 is about the size of an early Atomos Ninja recorder. It’s quite heavy so you’ll have a hard time dragging it to the floor by just moving around with the XLR-cable inserted. And, although RØDE positions the AI-1 as a home studio recording device, you can put this small box to good use if you’re going to record audio outside the comfort of your home or office.

The AI-1 being bus-powered means you cannot hook it up to an iOS device, which is a pity.

I spent two weeks trying out all kinds of different mics with the AI-1, some from RØDE, others from sE Electronics. The maximum gain of 45dB is quite low and while I found it to easily drive the RØDE NT1, I was having more trouble with an sE2200a. With the sE Electronics V7 dynamic mic, I couldn’t push the signal to my goal of -12dB. Of course, if you have a mic with a low noise floor like the V7, you can push the signal in post, but best practices dictate otherwise.

After having tried the AI-1 with different mics, I recorded some vocal material with the NT1 to see how the AI-1 sounds. I must say that RØDE’s first foray into the market of audio interfaces doesn’t disappoint, but before I go on about the sound it produces, let’s delve a bit deeper into the technical details of the unit.

I deliberately waited to open the case after having evaluated my recordings, in order to ensure an unbiased judgement. And I would have been biased, because the DAC/ADC is a Taiwanese chip, the NAU88L25 from Nuvoton. They make a decent DAC for ultra-low power devices such as the FiiO i1 for iOS devices, but it’s a far cry from the likes of Xilinx, Wolfson or ESS. The Sabre32 Hyperstream DAC/ADC you will find in the latest Apogee Duets, for example, has a THD of -113dB and a dynamic range of 123dB. The Nuvoton chip stops at -91dB and 113dB respectively.

Still, RØDE’s own engineering must have had a considerable influence on the actual performance of the AI-1, as the sound you record with this unit is clear and detailed with very little self-noise. That is bound to be due to a very decent pre-amp. There’s no colouration and the sound does lack a little bit in the low range due to the focus on a beautiful and transparent midrange, but it never becomes ugly.

The Duet has the distinct sound signature that is unique to the brand. None of that comes with the AI-1, but midrange tones are outspokenly present as are the highs without these sounding metallic. It’s only the basses that somewhat underperform. Those basses can be easily re-introduced by careful manipulation of the EQ curve, but I doubt if the AI-1 would be able to record drums successfully. Nevertheless, for vocals and string instruments such as acoustic guitars, the AI-1 is a good, precise audio interface, certainly for the list price of 120 EUR.

The combination with the NT1 is spot on, as the NT1 is a great microphone with a nice low noise floor and a flat frequency curve. It offers beautiful midrange sound and has an ‘open’ clarity in the highs. The SMR shock mount, that has the Rycote Lyre suspension system, was a revelation and the metal pop screen that fits the mount did a great job.

Now for the output. The AI-1 has a stereo headphones and two 1/4” (impedance balanced) output ports. You can monitor your recording without any latency at all by pressing the headphones volume knob. When you do, you’ll hear yourself directly from the unit. For recording purposes, this may or may not be a good idea as you won’t hear any effects you’re adding, but that's your own choice, of course.

The sound that is output over the headphones (mine were a pair of Sennheiser HD650s) suffers a bit from the non-audiophile quality of the DAC, but it does the job that it’s ultimately there for just fine. The Studio Kit costs between €340 and €390, which really is a bargain.