Genelec intros what may well be the ultimate sound monitor 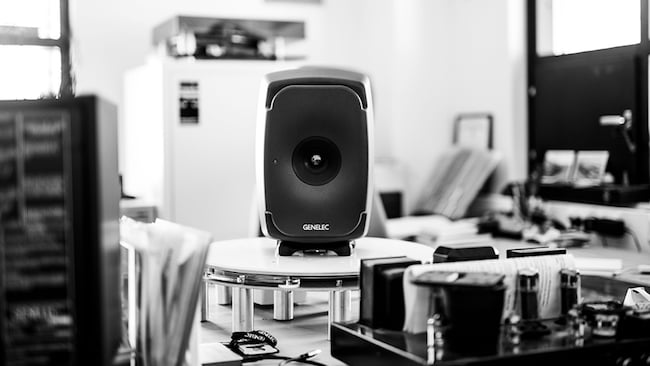 Genelec's three-way coaxial 8351 studio monitor has been joined by the 8331 and 8341 to create a complete compact coaxial range. The company calls the series “The Ones”, with the two newly introduced monitors claimed to be the smallest available on today’s market.

The Ones are point source monitors. These overcome the off-axis colouration associated with traditional loudspeaker designs, giving the user more freedom of movement rather than confining them to a narrow sweet spot. Unfortunately, this technology has limitations. When combined with coaxial designs problems pop up, such as limited frequency range, low SPL (sound pressure level) and uneven dispersion. The biggest problem, however, comes from having a gap between the high-frequency and mid-range sound, which Genelec solved by designing these two components with partially flexible sections — eliminating the acoustic gap completely.

The result is that the three monitors deliver precise imaging both on- and off-axis and come with a perfectly neutral reproduction, a full frequency response and an incredible low-frequency performance. Add to that Genelec’s Directivity Control Waveguide (DCW) combined with the concealed dual woofer design that’s also used in the bigger 8351 and you get less coloured reflections.

In simple terms: that scene with the thunderstorm will sound exactly as menacing you intended it. Or to put it in workflow terms: because these are point source monitors, there’s no difference between what the microphone (also a point source) captured and what hits your ears when you’re editing your movie or music.

Despite their small size, the short-term maximum output capacities for each of the new models is amazing. It’s 104 dB SPL for the 8331 and 110 dB SPL for the 8341 — both at a distance of 1 metre — with an accuracy that’s better than about 1.5 dB. Respective frequency responses start at 45 Hz and 38 Hz (-6 dB) and extend beyond 40 kHz both for the analogue and digital inputs.

The design and technical specifications are top-notch, but what makes these monitors really to drool over is that their coaxial design allows for ultra-near-field listening. It means that you can listen at incredibly close distances (e.g. 40cm) with a stunning direct sound-to-reverberant sound ratio. It also means the room’s influence while monitoring is reduced to practically nothing, allowing freelancers with modest setups to edit sound as the big guys.

The only thing that could stand between you and these small gems will perhaps be the price, which starts just shy of the £2000 mark.