Radio mics: what you find at the high-end 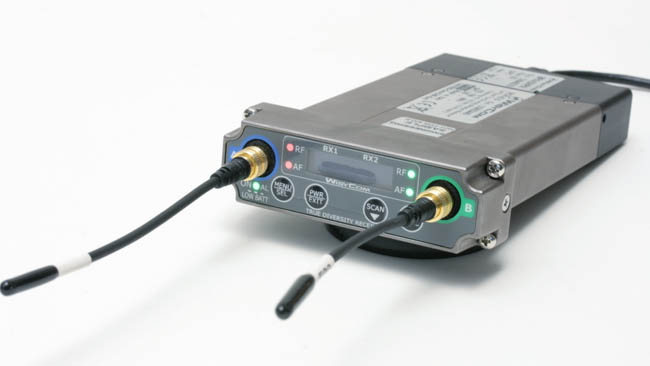 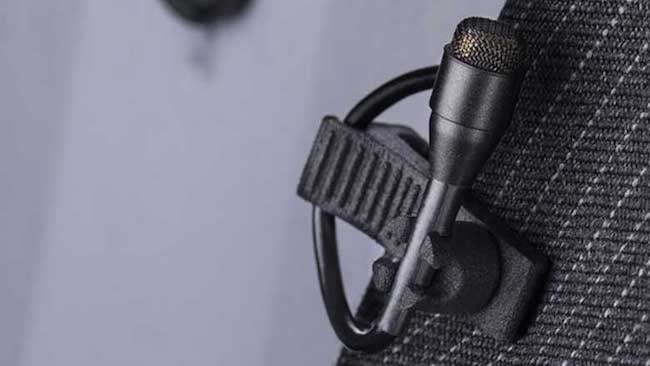 RedShark Review: Phil Rhodes takes the opportunity of looking at DPA Microphones' new SCM0013-B lavalier clip to look at some radio mic gear and examine some of the choices that exist in the current market, especially at the high end. 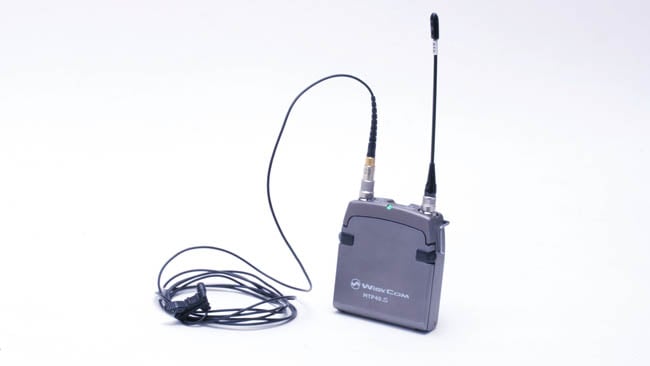 The clip is brilliant. It allows the mic you're using to be mounted facing in any one of four directions, making a single clip usable in a wide variety of situations.We attached that to a DPA SC4060 condenser microphone from the company's miniature d:screet range. It's designed for speech, complementing the deliberately less-sensitive (though otherwise identical) 4061 which finds use in theatre and live music. These designs define the concept of a workhorse, dating back to the mid-90s (but updated in 2014 with an improved strain relief) and most often used alongside a radio transmitter. An SC4060 sells for somewhere between £320 and £350.

For the purposes of this review, we're also considering Wisycom's MTP40S transmitter and MCR42 dual receiver. The receiver is built to drop into a slot on a broadcast camera. It’s an approach that has been appropriated by sound recordists who like to use a similar approach to physically mounting several receivers in a sound bag. In cameras, there is no standard physical or electrical interface for doing this, requiring adapters (£100 each) for Sony, Ikegami and Panasonic cameras. For recordists, Sound Devices have taken steps toward standardisation with the development of SuperSlot. This provides not only physical but also electrical compatibility and allows control of the receiver from devices such as (currently only) Sound Devices' 688 recorders. SuperSlot is designed to be non-proprietary (although they do list licensees). Three cheers for this: the MCR42 receiver has been SuperSlot-compatible since firmware 3.4 in 2015. The review item used Wisycom's BPA42HPN adapter, providing miniature XLR, four-pin Hirose power, and headphone output connectors. 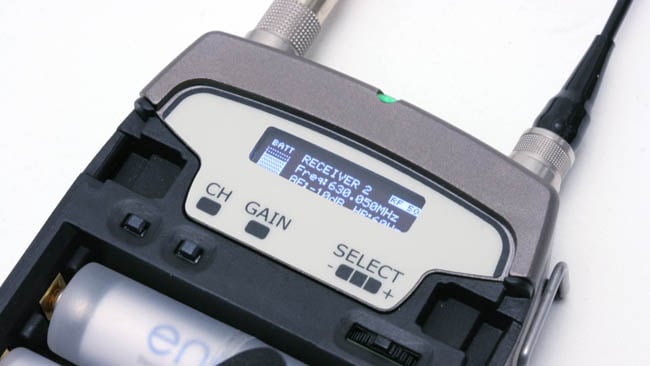 There are essentially as many radio mic designs as there are radio mics. A key consideration is the choice of either digital or analogue radio signalling, which is a separate issue from whether the receiver has digital or analogue outputs. Analogue signalling has been preferred particularly for live sound reinforcement because it can achieve very low latency. Analogue signals pass through electronics in a vanishingly short time. There is inevitably an encoding delay for digital information, especially if we want clever tricks such as encryption to stop people using radio receivers to work out if the starlet is singing live.

Digital signalling, conversely, adds zero noise in the wireless link, especially at the extreme range where analogue signals start failing. Eventually, a digital signal will also become unintelligible — the choice is a matter of use case. The MCR42 is a hybrid design, using digital signal processing (DSP) in the transmitter and receiver, but transmitting an analogue signal. The delay is specified as 1.5ms, which is enough to introduce a tiny audio phase error but not otherwise a problem even for live performance, and certainly not for recording on set. It offers both balanced analogue and AES digital output and transmits a low-bandwidth digital signal with the analogue audio for features such as transmitter battery monitoring.

The MCR42 is a dual true diversity receiver. Diversity is a technique which takes advantage of the fact that two antennae, even when only slightly separated in space, can experience very different radio conditions. The ability to use the better of the two signals helps with reliability and it's used in everything from radio microphones to video transmitters. The term “true diversity” refers to the fact that the system has two complete radio receivers, and may switch to the output of either depending on which is providing the best signal, as opposed to simply picking an antenna.

Now, since the MCR42 is a dual-channel true diversity receiver, capable of receiving two transmitters simultaneously, it actually has four complete radio receivers which are are each of considerable capability. A key specification is frequency range. The MCR42 covers a range of 240MHz, giving users the best chance of finding a quiet spot. It's worth pointing out here that all of the frequencies accessible to the MTP40 and MCR42 require licensing. The least-expensive, least-exclusive option costs £80 a year in the UK, but this varies across different places and situations. 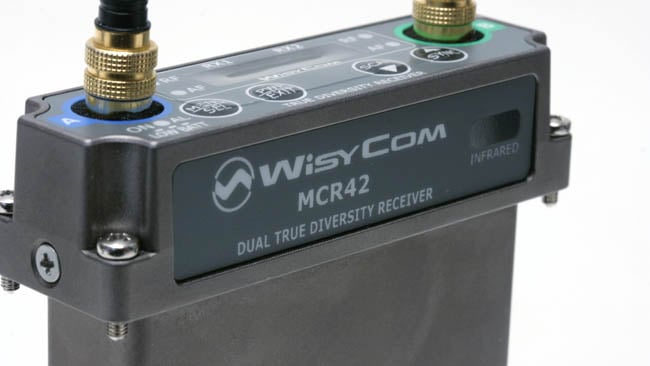 The MCR42 is designed to fit either cameras or go in a shoulder bag, perhaps in a module with several others

The MTP40S transmitter is a thing of restrained classiness. The only plastic parts are the clips which hold the battery door shut; everything else is machined metal. We wouldn't expect to find a 3.5mm mini-jack on something at this level, and we don’t. The DPA mic's microdot connector is adapted to the three-pin input. A variety of microphone sensitivities and powering options are supported, as well as companding options to prioritise both vocal reproduction and absolute noise figures. The phantom power allows a boom operator using a phantom-powered shotgun microphone to easily be cable-free.

Companding is a technique of analogue radio mics. Compression (dynamic range compression, not bitrate compression) is applied to the audio in order to increase the level of quiet parts of the signal. Then, symmetrically expanding the signal at the receiver recovers the normal audio while significantly improving noise levels. The particulars are manufacturer-specific and often sophisticated enough that they're hard to implement outside of a digital signal processor — one reason for the DSP in Wisycom's receiver. This flexible approach facilitates compatibility with some third-party transmitters, although the minutiae of this are complex enough that anyone interested will need to do some careful research. 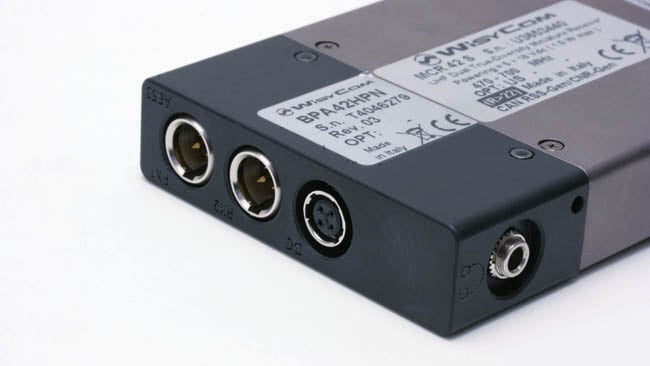 UK prices are surprisingly hard to come by. US suppliers advertise the receiver at $2300 and the transmitter at $1600. This would push the total cost toward $4500, although package deals often reduce prices significantly. Estimations of performance on radio gear are complicated by the realities of signal propagation and interference, but something at this level will certainly provide the best chance. 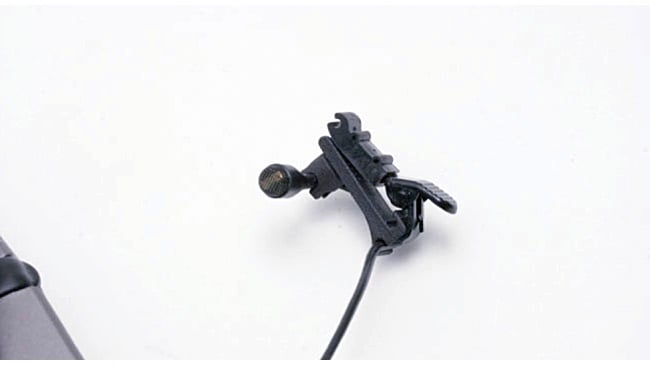 And that lavalier clip is $17 and is wonderful, too.