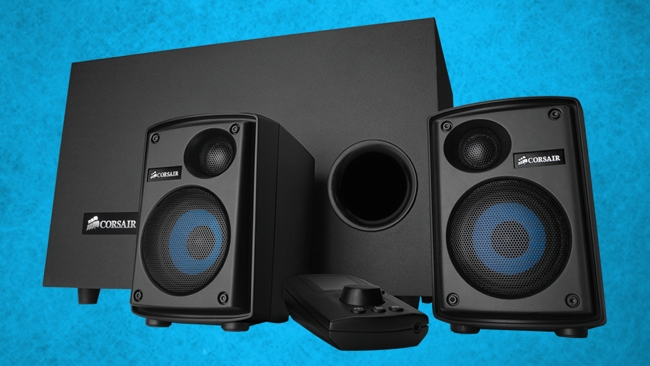 Memory chip manufacturer Corsair has quietly been manufacturing a set of 2.1 "computer" speakers that sound far better than they should for the price. In fact, they're pretty much ideal for professional use, if you're on a budget

Sometimes you come across something that's so good, you can't understand why it's for sale at the price on the sticker. These things happen rarely, because everything is subject to the same laws of economics. When it does happen, it can be for a number of reasons, the most likely of which is that the technology that goes into the product has improved, making it better, or cheaper, or, sometimes, both.

But technology is improving all the time. So why doesn't this happen more often?

Well, the truth is that it probably does. Look at how your smartphones have improved over the last few years. My phone has gone from having a tiny screen that would have resembled at 1980s console game to looking better than - and having the same resolution as - a high-end broadcast monitor (maybe not - but you see what I mean!).

But in other, less glamorous areas, like loudspeakers, this doesn't seem to happen as much.

And that's why the SP2500 speakers from Corsair are such a revelation. I'm reviewing them not as computer speakers, but as reference monitors that you could use as an audio editor or music producer. Obviously, you're not going to find these installed in professional dubbing theatres and music studios, and there are always those who would argue that you have to have professional equipment; but if you're on a budget, and need some accurate sounding monitors, you might want to try these.

For a start, what's Corsair doing making loudspeakers? Corsair's traditional domain is making memory chips, not audio transducers. One can only speculate as to why they've moved into audio, but, when you consider that their chips are often used in high-end gaming PCs, there's a bit of a clue: these are "officially" gaming loudspeakers.

Except that they're exceptionally good for everything else as well.

I think it's because Corsair has gone into audio with a blank sheet. You have to be pretty clever to make memory chips, and some of that intelligence has obviously gone into making this 2.1 speaker set with a sub-woofer the size of a microwave oven.

Over engineering is a good thing

To say that these speakers are over-engineered is to make a significant understatement. There are six amplifiers, two for each of the small satellite speakers and two for the subwoofer. And then there is a Digital Processing System that doesn't just do the usual "gimmicky" effects like reverb, but provides an active digital crossover, so that not only are the loudspeakers optimally tuned, but the position of the crossover frequency can be varied as well. There's even a "Night time listening" setting that shifts the bulk of the audio up towards the smaller satellite speakers so that bass levels in the middle of the night can be controlled.

The speakers are rated at 232 watts RMS, measured using the American FTC guidelines.

Why they're so good

I've worked in recording studios and with professional digital audio for (ahem) a few decades, and while these are no Genelecs, they are more than a match for the smaller, powered studio monitors that you might have to pay several hundreds of pounds for - and then still have to buy a subwoofer.

Here's why they're so good. For a start, as I've already said, they're over-engineered. What does this mean in practice? Well, apart from starting with a very good sound, they're able to work at very high levels. It's the only loudspeaker system I've seen where they actually state that you can run these devices at full volume for 24 hours. That's quite a claim, but it's important in the sense that these little loudspeakers aren't going to be distressed or damaged by the sort of accidents that can happen in a recording studio or even a dubbing theatre. (The sort of thing I mean is when you plug a synth set to generate a 1Khz square wave into the mixer and it blasts out at full volume). You may not want to use them at such high levels all the time, but what's important is that there is power to spare. And that means that transients like door-slams and explosions will be handled with ease: accurately, and without distortion.

How do they sound?

Very detailed, with a precise stereo image. Easily good enough to demand that you use a very good audio source. While they're powerful enough to fill a large room, they're best used as "Nearfield" monitors.

The sub woofer is integrated with the overall sound better than with any other 2.1 system I've come across, that didn't cost thousands. If you're used to listening to cheap 2.1 systems, this will be a revelation, because contrary to what most people believe, you shouldn't actually be able to "hear" the subwoofer as a separate device. What the subwoofer should actually do is simply add a couple of extra octaves to the sound of the smaller "satellite" speakers. It should do this subtly, and shouldn't have a sound of its own. The Corsair speakers do this admirably, but don't be surprised if you find that the sub doesn't make as much noise as you were expecting.

You certainly notice it when it's not there, though. Turn it down and the music sounds thin and unsubstantial - exactly as you'd expect.

I tried the speakers with a wide range of music. Classical sounded wonderful, helped by the solid and accurate stereo imaging. EDM (Electronic Dance Music) was reproduced effortlessly, taming the sometimes wild bass content while still giving a satisfyingly solid rendition. Gentler tracks like Emeli Sande's "Clown" sounded so clear and smooth that you would think you were listening in the recording studio.

There are several DSP settings on the colour-screen wired remote control. Personally, I'd ignore all of them and just set it to "reference", which, for me, gave the most accurate and pleasing sound.

It's hard to believe I'm actually writing in this tone of voice about some computer speakers. They really are that good. They don't try to look like anything other than computer speakers, but they'll blend in with any environment.

How good are they ultimately?

I think you've have to pay five times the price of these speakers to get something significantly better.