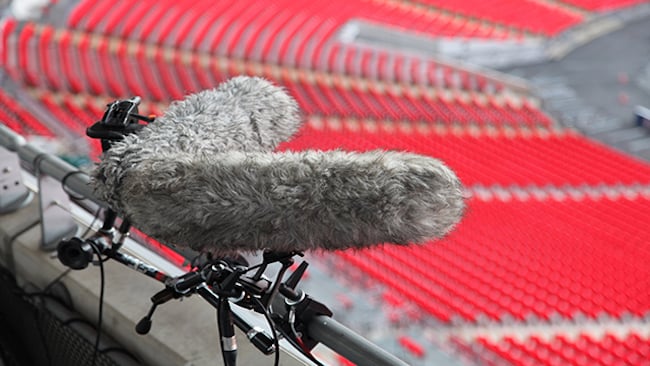 Mics at a sports ground during Atmos testing for live broadcast

Five years after it first appeared in cinemas, Dolby Atmos, a key component of the UHD future, is slowly edging into the world of live broadcast television, as this week’s soccer broadcast by BT Sport in the UK proved. By Matt Gregory, RedShark Staff Writer

As something of a sweetener to BT Sport subscribers who will soon be asked to pay extra for the service, the broadcaster became the first in the UK to rollout a Dolby Atmos audio feed into live UHD coverage.

Additional ceiling speakers, a plug-in for mixing consoles to monitor sound and a Dolby Digital Plus encoder have been added to Telegenic’s T25 outside broadcast vehicle from which the OB of the EPL Liverpool vs Chelsea soccer match on 31 January was produced. (impressively enough, this is the broadcater's 172nd UHD football match).

Dolby Atmos is designed to give viewers greater acoustic immersion, by way of additional height channels. Dolby dubs this three-dimensional spatial audio using audio objects and metadata – as opposed to 1- or 2-dimensional channel-based audio experiences like 5.1 that are common today.

The idea is that it will enable a more realistic ‘at the match’ experience for BT Sport Ultra HD viewers, provided they have home cinema equipment or sound bars from the likes of Sonos, Yamaha, Samsung or Bose to project the sound.

Sky has also conducted trials and can be expected to launch a similar option for top-tier customers soon. Atmos was also tested by UEFA during last summer’s European Championship tournament (with Telegenic's truck) and is likely to be a fixture in future Champions League broadcasts.

What will viewers appreciate? Well, we're promised ambient atmospheres such as crowd noises and the sounds of the PA system – as familiar to soccer matchday goers as a half-time pie. Also added to the mix, consumers could be given additional audio options, such as commentary from just the home team’s perspective (for less balanced, more tribal viewing) or choice of language commentary.

All the main OB suppliers to the UK’s sports broadcasters are adding in Atmos capability. Arena has done so with its OBX truck and NEP UK is adding Atmos to its UHD mobile units.

Atmos is encoded as Dolby AC-4, a format already standardised by the European Telecommunications Standards Institute (ETSI), adopted by the Digital Video Broadcasting Project (DVB), a candidate standard for the audio portion of ATSC 3.0, and ready to deploy. Dolby has already partnered with Vizio, Sony Visual Products, Samsung and TP Vision to incorporate AC-4 into next-generation televisions.

Arguably, a 4K service transforms into UHD only when additional qualities like enhanced audio (part of the UHD TV standard) are introduced. The next step is HDR and then higher frame rates, but this is not likely before 2018.

Update: BT Sport has confirmed that, for the rest of the season, every live Premier League match, as well as a selection of FA Cup games, will be available in Ultra HD and Dolby Atmos sound.