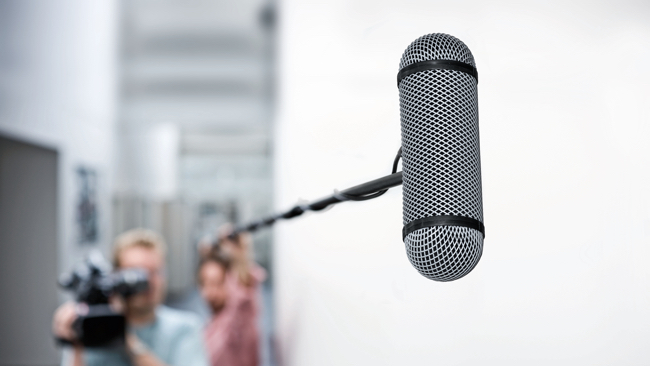 Replay: Here's a bit of advice that may seem elementary, but is a crucially important factor to your audio recording success.

If you know only one thing about recording audio for video, it's this: get the microphone close to the subject.

Because if you don't, your audio (and hence, your video) will be unusable. If you've ever made even slightly successful videos, you'll know this. But with so many new videomakers arriving on the scene – often inspired and tempted by the prospect of visibility through social media – the problem is more widespread now than ever.

It's not surprising, because if you've never recorded audio before, you will probably be unaware that our ears are not simple microphones and that microphones do not behave like ears. Here's the crux of the problem: the fact that you can hear someone clearly with your ears doesn't mean that a microphone will give the same result. I'll go into the reasons for that in a minute, but first a closer look at the main issue: how to record the sound that you want and not the sound that you don't want.

Virtually all recording devices have some sort of level control and usually a sound level meter, too. The first step in recording anything is to set the recording level by adjusting the sensitivity of the device to the signal from the microphone. Make sure that the loudest sounds don't max out the meter, but also that they're not too far below maximum. If they are too loud, they will distort. If they're too soft, there will be too much background noise and room acoustic, which will sound bad and make speech hard to understand. Intelligibility is the thing to aim for. Get to know your own recording system: understand how the meters correspond to how your system records sound. If you're going to rely on meters, it's imperative that you understand what they mean for you and your equipment.

Use headphones, too! It's preferable to use "closed" ones where there is an airtight seal around the earpiece to keep external sounds out. Get to know your headphones: listening on 'cans' is very different to how most people will hear the audio in your videos, although it's very likely now that your videos will be seen on a mobile device while the viewer is using in-ear phones.

Here's a good thing to try if you want to learn about recording audio. Go into a room in your house, preferably one with a wooden or tiled floor, put a microphone on the table in front of you and record yourself talking. What does it sound like? Probably not very good. What you're hearing is your voice directly recorded into the microphone, but also the reflections of your voice coming off the floor, walls and ceiling. And yet, when you listen to someone else talking in the same space, you don't hear the reflections. Why is this?

It's because we (well, the combination of our ears and our brains) are very, very good at filtering out these reflections. We just don't hear them, unless they're extreme, as they might be in a cathedral, for example. Remarkably, we do make use of the reflections. They help to tell us where the sound is coming from and about the space that we're in. We do this automatically and we're normally completely unaware that this is going on, but in a reflection-free space (called an Anechoic Chamber), we feel oddly disoriented and ill-at ease, precisely because of the absence of these subtle audio cues.

You can't remove these reflections. Well, that's not strictly true. iZotope's RX5 suite of software can reduce reverberation, but it's obviously better to get it right in the first place.

The best way to do this is to either get the microphone as close as possible and/or use a very directional microphone. If you were making a radio program, it's easy enough to get the microphone close to the mouth of the speaker. But with video, it's harder. You don't want the mic to be in-shot. So, you either have to use a directional mic, which will be very sensitive in the direction you point it (and insensitive to sounds off-axis), or a small microphone that will either be invisible in-shot or, at least, not too offensive.

The closer you can get to the speaker with the microphone, the better the ratio of the sound you do want to the sound you don't. That means better sound and, most importantly, better intelligibility.

At the risk of repeating myself, the very best thing you can do to improve your audio skills is to practise using your equipment. Try it in as many situations and environments as you can. Do enough of this and you'll be able to cope with virtually any situation that's thrown at you.

[Note that this article has been modified because we originally suggested that a shotgun microphone is the best choice where extreme directionality is called for. A reader has pointed out to us that this is not the case, especially with highly reverberant environments. It is always best to get the microphone as close as possible. Cardiod or hypercardioid will probably be a better choice.]