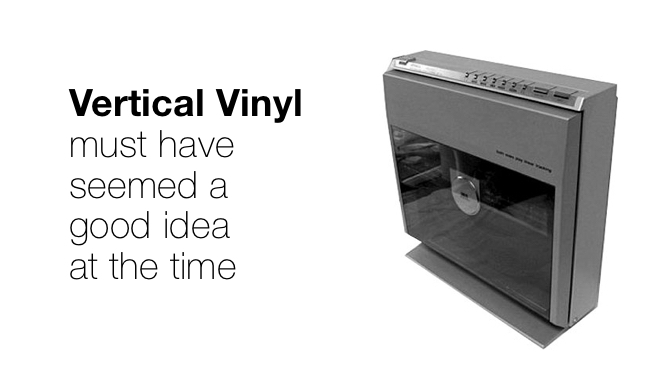 We take a look at a technological oddity of yesteryear, the vertical record player - an unneeded (and ultimately unwanted) engineering marvel.

It's fun to look back at the 80s and you can learn a lot, too. What you find is that, while consumer products are stylish, build quality isn't great and the quest to be innovative sometimes takes the technology down some complete dead ends.

And no more so, perhaps, than the vertical record player.

Sony had a model, which is now only available on Ebay for more than its original price. Sharp had one, too.

We've found a nicely made video showing the strengths and weaknesses of this ultimately pointless way to play a record. Why is it pointless? Because when you play a record horizontally, they way it was always meant to be played, gravity keeps the stylus in the groove. Without that, you have to employ all manner of techniques to keep the stylus tracking.

These were the days before complex microcontrollers and systems-on-a-chip, hence the complexity of the innards of this deck which are revealed in the video.

Ultimately, though, it doesn't seem likely that this arrangement sounds very good.

That doesn't matter now. What matters is that this thing still exists, remarkably, thirty years after it was first shipped in its cardboard box.