The NAMM show is unique. Here's what it's like to visit it 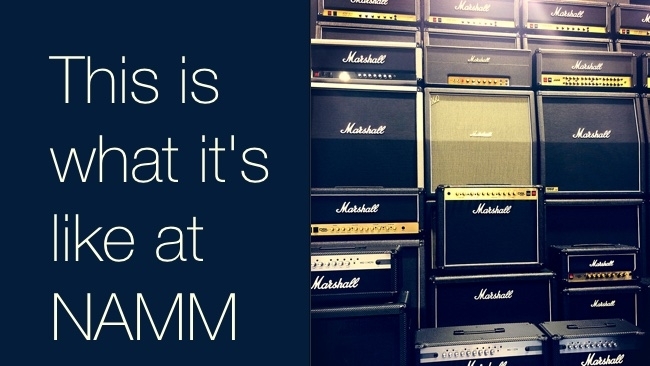 It's unique, and it's pretty amazing. The National Association of Music Merchants (NAMM) show is an experience to behold. Here's what it's like to attend this extraordinary show

NAMM is a big show. We chose it to be the venue for Redshark Sound's launch because it's a real mixture, and quite unique amongs trade shows. It's the biggest show in the world for the music industry. There's everything from the very latest 24 bit, high sample rate audio interfaces, to double basses, tubas, and some wierd-looking instruments that look like they've come from the set of Star Wars.

So do some of the people. All credit to them too. Some attendees go well beyond the "unifrom" of long hair and jeans to flaunt an exuberant and uninhibited persona that refreshingly pokes a finger in the eye of the corporate stuffiness that you inevitably find at more conventional trade shows.

And I'm desparate to find an authoritative source that will confirm that this was the largest concentration of pony-tailed middle-aged men on the planet. (I would be one of them if hadn't been completely bald for around two decades).

The easiest way to sum up the experience of going to NAMM is to say that you know it's a music show. You can't mistake it.

The approach to the Anaheim Convention Center is a palm tree-lined avenue (this was January, but this was also Southern California. The sun was out and it felt warm). Nestling under the trees were about a dozen street-food trucks, including one that was called "Falasophy", which, obviously, was selling Falafel.

Just to make sure you couldn't hold any sort of conversation while you were feeding, there was a stage with a constant stream of rock bands. The already loud bass bins were helped in their mission by the two enourmous hotels to either side of the avenue, the Hilton and the Marriot, which fromed a gigantic canion for the sound to reverborate around.

That was noisy, but nothing prepares you for going inside, where - you have to try to imagine this - around fifty companies selling drums have to compete in complete aural anarchy with around a hundred companies selling guitars and amps.

It's certainly not the quetest place and this is confirmed by notices around the halls telling you that by attending the exhibition, you accept that your hearing may be damaged by the unsusually noisy environment. In the future, when science has invented a way carry out DX7-like FM synthesis using tinitus as a sound source, it probably won't matter so much, but meanwhile, you might want to consider bringing some ear defenders next time.

It's an exciting but frustrating show. We were there on business. We wanted to shake as many hands as possible. I specifically wanted to see the best audio I/O devices as well as new loundspeakers and microphones. I wanted to see the latest DAW software as well. I also like synthesisers, and although that wasn't our main focus, every time I spotted a new one I was like a dog that had just seen a squirrel.

It was frustrating because of the noise and especially because of the crowds. The sheer number of people there made it slow and difficult to move around. Sometimes the queues to see demonstrations merged with other queues, leaving people standing for an hour and then realising they were in line for the wrong thing. It was hard to get to the computer hardware and the keyboards because they were often six-deep with eager visitors. This must put people off going to NAMM, although that's a bit like saying "nobody shops at Sainsbury's because of the queues".

We weren't there to bring real time reports from the show floor, but we saw some very good stuff and we'll be reporting that for the next week. Highlights for me were the new Korg Minilogue, a new (and as yet unreleased) miniature audio recorder from Sony, and getting an exclusive interview with the CEO of Avid, Luis Hernandez Jr, the executive who is ultimately in charge of ProTools. (You'll be able to read this in RedShark Sound as soon as we've transcribed it).

Will we go to NAMM next year? Probably. It is one of the most frustrating shows. It's painfully noisy, it's exhausting, and you can't hear what anyone says to you. But, ultimately, for all its faults, it is rather wonderful.