The close-up effects of a sonic boom 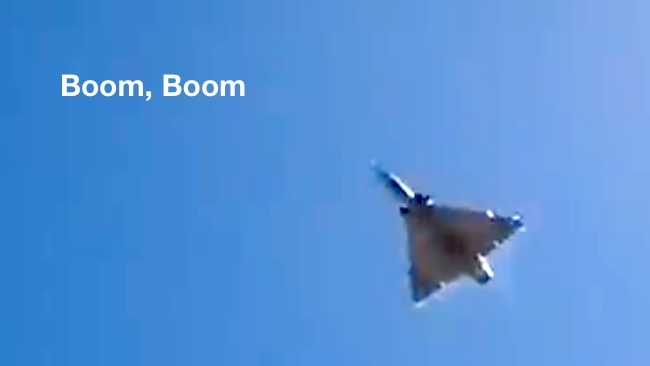 (Replay) We spend a lot of time and money designing microphone pre amps that are so quiet you can turn the wick up and listen to the grass growing. We spend less time thinking about sound that is so loud it can almost destroy a building.

So it’s for that reason that we’re bringing you this sonic boom.

I’ve heard a fair few in my time. Mostly at the UK’s international Farnborough Air Show. They don’t allow it now, but you used to be able to go along and see all manner of jets zooming past only a hundred or so feet from the ground. And they’d do this supersonically. That was a loud noise, although the sonic boom itself was somewhat masked by the sheer racket from the jet engines.

Then there’s the boom you’d hear from a supersonic jet at high altitude. Often, this was a double bang, much more distinct as the engine noise was more distant.

I’m pretty sure that it was the sonic booms that crippled the commercial success of Concorde, with supersonic flight only allowed over the sea. At low altitudes, even at subsonic speeds, the engines were so noisy that they would regularly set of car alarms at Heathrow airport, leaving passengers puzzled as to why their batteries had gone flat when they returned.

Here’s a video of something you don’t see very often. It’s two jets from the Brazilian Air force, which, for some reason, decided to fly very low over a famous building by the architect Oscar Niemeyer, which makes it even more of a shame when the sonic boom shatters every pane of glass in the building.

What’s fascinating to see is that as the planes approach, they’re completely silent. Then, suddenly, you’re exposed to the noise of the jets, just as they pass overhead. Disappointingly, you don’t really hear the sonic boom distinctly - probably because of clipping or limiting in the recording. But it’s no less dramatic for that.

It must have been an interesting insurance claim. Check it out.