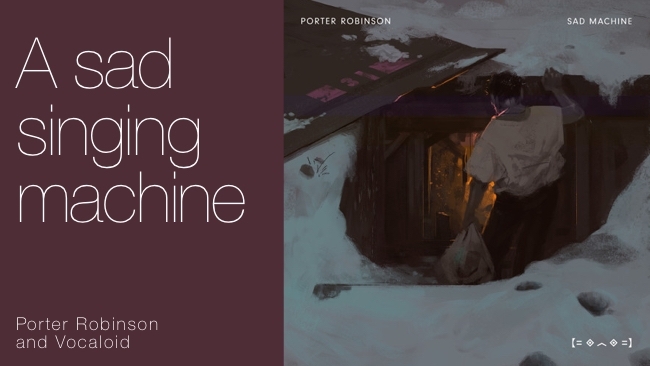 What happens when a boy meets a frightened machine? Beautiful music.

Sometimes there’s a perfect meeting between an artist and technology, and Porter Robinson’s 2014 track Sad Machine might just be one of the best examples.

Robinson, still only 23, has a powerful artistic vision, not just restricted to the tenets of EDM but reaching out into emotional lyrics and euphoric electronic vistas.

One of his tools is Yamaha’s Vocaloid software. It’s a synthetic voice that can sing songs, with precise intonation and accurate vocal articulation. There’s clearly a lot of science behind the software. It’s not quite on the level where it sounds like a human singer, but it can certainly sound musical to a very useful degree. In the right context, it’s a creative tool.

Porter Robinson has taken the artificial sound of Vocaloid and written a song that exploits - or should I say celebrates the synthetic origin of the voice. Sad Machine is about a computer that “wakes up” into consciousness, and says, in a hesitant, slightly glitchy way: “Is anybody there?”, with an almost painfully plaintive rising intonation on the word “there”. The machine - or should we say the machine’s “self” - becomes dependent on the boy.

Vocaloid is actually capable of more human-sounding performances than this. But Robinson seems deliberately to have introduced imperfections to reinforce the idea of a sad machine that’s just woken up to an uncertain and frightening world.

The music itself is quite beautiful, with a simple but poignant major 7th/major 9th melodic riff. It’s uplifting but tinged with sadness; hinting that life, like the machine’s newly-found self-awareness, is temporary and contingent.