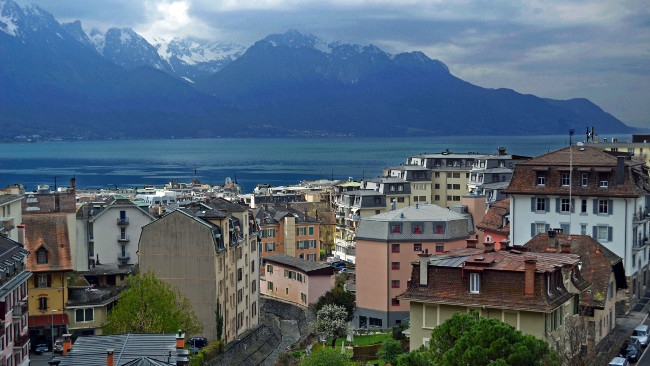 In our latest edition of the Studio Profile series, we climb the Mountain or, rather, Mountain Studios, once owned by Queen. By Jim Evans.

Mountain Studios on the shores of Lake Geneva in Montreux, opened in 1975. The first clients for professional recordings were The Rolling Stones. Until its closure, following redevelopment of the Casino site, which had been rebuilt following the 1971 fire immortalised by Deep Purple in Smoke On The Water, it attracted clients from around the globe.

For many years, Mountain was owned by Queen – a statue of Freddie Mercury is a major tourist attraction on the Montreux waterfront.

Queen had already released six albums and conquered the globe when they came to Mountain Studios in July 1978 for the first time to begin recording their seventh album, Jazz. The band quickly discovered that Montreux offered respite from the glare of media attention, allowing them to write and record in relative peace.

When the members of the band returned to Montreux in 1978 to do post-production on the live album Live Killers, they decide to purchase the studios.

David Richards was the resident producer and engineer at Mountain Studios at the time. He was to become a trusted friend and associate producer of many of their subsequent albums.

"The very first time I met them was when they came to make the Jazz album here. They were working with their whole crew and they had Roy Thomas Baker engineering, I just met them very briefly. That was when they decided to buy the studio as well, so I suddenly became under new employment."

Later hits and The Studio Experience

In 1993, Richards bought Mountain Studios from Queen and stayed, including a visit from Michael Jackson to work on the Blood On The Dancefloor: HIStory In The Mix album in 1997. However, in 2002, he moved the facility to the village of Attalens, five miles from Montreux. The former Mountain premises in the Montreux casino was recently reopened as Queen – The Studio Experience.

Queen – The Studio Experience is located in the original Mountain Studios, part of the Casino Barrière de Montreux, and charts the band's association with the studios, their personal relationship with the Swiss town and the albums that were written and recorded there.

The control room has not been changed since the days when Queen worked here. The only thing that has been replaced is the original Neve desk. In its place is a reproduction of the original, which allows visitors to make their own re-mix of some of the Queen classics. Many of the fixtures and sound equipment remain exactly as they were when owned by the band. The exhibition includes photos and memorabilia from the band's personal archives and in the Made in Heaven Room, visitors will be able to stand in the exact same spot where Freddie recorded his last song.

Eulogy for the ages

David Richards died in 2013. His obituary in the Guardian stated, "The engineer and producer David Richards was a linchpin at Montreux's famed Mountain Studios in Switzerland, where, from the late 1970s until the mid-'90s, he helped David Bowie and Queen record several of their classic albums. He was there in 1981 when, at the suggestion of the Montreux Jazz Festival promoter Claude Nobs, Bowie and Queen created their chart-topping collaboration Under Pressure. He co-produced A Kind Of Magic, The Miracle, Innuendo and Made In Heaven, the last four Queen albums, which all made No 1.

"In 1986, he helped Bowie produce Blah Blah Blah, Iggy Pop's most successful album. And in the mid-'90s he helped Bowie create the soundtrack for the TV adaptation of Hanif Kureishi's novel The Buddha Of Suburbia, and then when he recorded over 20 hours of material after reuniting with Brian Eno for the Outside project.

"The unassuming Richards recorded a host of performances at the Montreux Jazz Festival every year after Nobs decided to document as many concerts as possible, including The Complete Miles Davis At Montreux 1973-1991 20 CD box-set (2002), Talk Talk's Live At Montreux 1986 (2008) and several Simply Red shows."