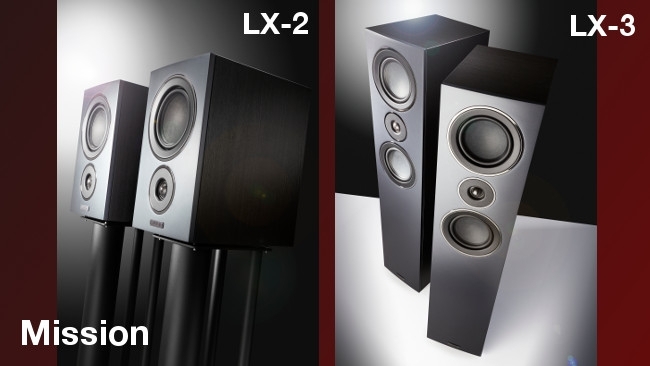 Mission has unveiled is new LX speaker range, which represents both a continuance of its current design philosophy and a return to the brand's roots. By Dan George.

Affordable speaker champion Mission chose February's Sound and Vision show in Bristol (the UK's largest consumer A/V show) to take the wraps off its LX range of speakers. This is the first range from the company's new design team, which includes individuals from the brand's earlier years, and there appears to be some detail differences in comparison to earlier Mission models. Equally, there are some parts of the range design which are trademarks of the brand. This includes mounting the tweeter underneath the mid/bass driver to help with time alignment –  the speed at which the sound from both drivers hits the ear. On the LX series, this has been taken a step further by extending the tweeter dome beyond the mid/bass driver.

The two models revealed so far include the LX-2 standmount and the LX-3 floorstander. Both models use a 25mm soft-dome tweeter which is partnered with a 130mm mid/bass driver – a single one in the LX-2 and a pair in the LX-3. The exact material used in the mid/bass driver is as yet unconfirmed, but Mission states that it has an 'advanced fibre formulation' that helps the overall stiffness of the cone and gives it self-damping properties that should improve performance. A high-strength magnet helps focus the magnetic field to further boost performance; both models are rear ported.

The LX series is due to go on sale in late spring. Pricing for the LX-2 is confirmed at £200 and the LX-3 at £300. The range will be further extended with the smaller LX-1 stand-mount and larger LX-4 and LX-5 speakers, due later in the year, with a centre speaker being added for multi-channel set-ups. Pricing for these other models has yet to be confirmed.