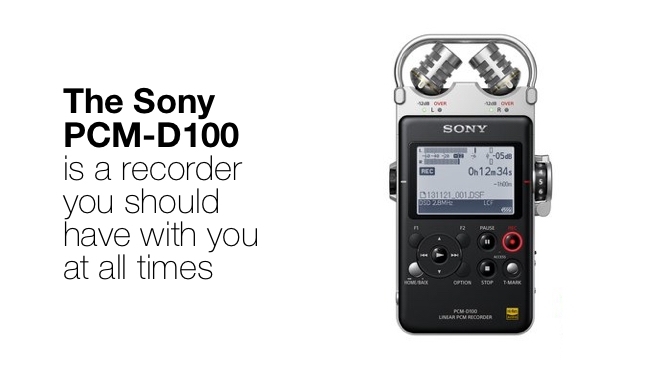 Either way, you couldn't do this in the days of tape, because the motor would have been too noisy.

And that's especially true with the PCM-D100, which is capable of recording an extraordinarily high dynamic range.

The device is pretty tough. There's an aluminium body, and where plastic is used, it seems strong.

There's a big screen with a rather "traditional" looking LCD display, but when you think about it - you wouldn't want an electrically noisy computer or phone-type screen on a recorder like this where so much is opitmised for low noise. Nor would you want a complex operating system like Android that would need constant updates. You just want it all to work, even if it means that it doesn't upload to SoundCloud or play or Candy Crush Saga.

Near the top there are four useful LEDs" -12dB for each channel and the same again for "Over". Even though the metering is pretty good it's much easier to see these from a distance.

The master record level controls are dual-concentric. The outer ring controls the right channel and the inner knob handles the left. Even though I found the left channel slightly awkward to adjust because of this set up, it's definitely worth the slight hassle because one's you've balanced right and left, you can lock the positions of the controls relative to each other and adjust them both together with the bigger outer ring.

There's also a physical guard that snaps into place to avoid changing the setting accidentally.

The front panel is dominated by the large LCD screen, leaving the rest for the physical controls. It's a simple and effective layout. Pressing "REC" puts it into record-pause, and you start recording by releasing the Pause button. This could lead to missed recordings if you didn't know this in advance but I think it is a good way to do it as long as you relabel the "REC" button "Record-Ready" in your mind. What it does mean is that it's very quick to get into the mode where recording hasn't started yet but the meters are working.

There's a clear "Stop" button and, next to it, a "T-Mark" button for placing markers in the recording. To the left of these controls there's the master transport control with an up-down selector for navigating the menus. There's an additional - and rather useful - "Home" and "Back" key. Finally, above this arrangement on the left are two assignable function buttons.

The menus are clear and self-explanatory. It's pretty simple to select the recording options (PCM vs DSD, Sample rates, Limiting etc). I managed without a manual, although I don't recommend this because you might miss some interesting nuances.

On the left side is a 3.5mm jack for headphones and a headphone level control. There's also an optical digital out, as well as a jack for the remote control receiver, which is not built into the recorder.

The right hand side has a stereo 3.5mm jack for Mic in, and there's an optical input as well.

On the bottom, there's a very small loudspeaker, which is so small that it's never going to be able to do anything more than act as a sanity check - but that's OK - because this is not a boom box and if you need to do a quality check... that's what headphones are for.

The two mikes can pivot between a 90 degree angle leaning towards each other and 120 degrees away from each other. The former position is best for close-up work, and you'd use the latter for recording, say, and orchestra, when you'd need to be a lot further back.

Internal storage is very usable 32 GB and you can add to this with various types of SD card - or Sony Memory Sticks, for that matter - but who uses those?) You can set the system to "span" between internal and SD storage. It's a pretty flexible system. My preference was to record to SD cards because it's a matter of seconds to transfer them from the PCM-D100 to the slot on my Macbook Pro for editing.

This is not the cheapest device of its type by a long shot, but it's just possible that it might be the best. Let me explain what I mean by this.

The PCM-D100 is able to record very high quality audio. The recorder is capable of 192 KHz 24bit sampling, which is about as good as it gets with Linear PCM (Pulse Code Modulation - the same way that sound is stored on a CD). It's arguable that there's no point in sampling at even higher quality - at some point you'll just be recording bats. (There's a lot more to it than that, but you know what I mean!)

But that's not all.

The Sony recorder can also capture sound in DSD (Direct Stream Digital). This is a much more abstract thing to understand technically, but is, in a sense, much closer to all that's good about analogue recording. Essentially, DSD only samples with 1 Bit resolution, but does so with a very much higher frequency than with PCM. The net result is that you can reconstruct the original audio from the "density" of ones and zeros in the recording. This is much more like analogue, and especially because it avoids the awkward zone as the signal passes near the zero line. Accurately sampling such small voltages is a problem that can only really be solved by using increasingly precisely calibrated analogue components.

DSD gets round this by only only having full scale ones and zeros. But there are so many of them that they carry all the information anyway.

The PCM-D100 takes DSD so seriously that it has separate A/D converters for the high-end format. Well, it has to, because they work differently.

"Traditional" digital recording isn't exactly neglected either, with sampling rates up to 192 KHz at 24 bit. This means that you'll be able to record frequencies way above the human hearing range and be able to cope with a massive range between the quietest sounds and the loudest.

The two microphone capsules appear to be very high quality and able to handle the extraordinary dynamic range.

I put this to the test in the best way I could think of: I recorded a brass band concert.

The Boxted Methodist Silver Band were playing near to Colchester in the UK, and the conductor happens to be my niece, who was happy to let me put the PCM-D100 on a tripod in the auditorium.

I didn't get a chance to do a sound check with the band, so I took a cautious approach by setting the levels relatively low. I also switched in the limiter - just in case of unexpected peaks.

Recording this type of performance on a 16 bit system would have been a nightmare. While 16 bits will give you a theoretical dynamic range of 96dB, you never get to the whole of it because that would imply that the very loudest sound is going to peak at exactly 0dB FS (Full Scale). This will never happen in real live. The reality is that you have to set the recording to peak, say, 12 DB below full scale, which is throwing away a significant amount of dynamic range, and possibly also risking some noise on the quieter passages.

With 24 bit recording (I chose 96KHz PCM as I wanted to be able to edit the material immediately) you can almost set things up as if you're in a perfect 16 bit environment and then you have 8 bits of headroom for the unexpected.

This worked pretty well in practice. Believe me, a brass band can go very soft, and very loud. When I played the recording back, I could see a few instances of peaks to 0dB FS, but I couldn't hear a trace of distortion. I'm assuming that this wasn't in fact down to my skill in setting the levels initially, but to the limiter kicking in very subtly. And believe me, it is subtle. It's exactly as you'd want.

Everyone I played the recording to agreed that it sounded very good. I was impressed.

One practical point: you have to treat the PCM-D100 as if the whole thing is a microphone. It's best not to handhold it because you can transmit noise to the capsules.

Best to put it on a tripod and point it at the performance. This worked very well for me. There's a standard 1/4" tripod mounting hole on the underside so you can mount it with the microphones pointing forward.

This is a really great recorder, because it goes as high as you can get with recording formats, and backs this up with a very solid performance. There are no XLR inputs but to criticise it for that is to miss the whole point of the PCM-D100. And that point is that it is self contained. It is an extremely high quality recorder in a single device. Treat it like a digital recording microphone and you can't go far wrong.

The DSD recording capability is the icing on the cake. In my tests, which were nowhere near comprehensive, it sounded very good indeed. The only problem being that so did recording in conventional PCM at high sample rates and 24 bits. I honestly couldn't say which was better, but there was a slight difference. What you would have to do to be definitive about this is set up some tests designed specifically to illustrate the difference. I would guess that a long, sustained piano note fading into silence would be the most challenging and would probably show DSD in its best light.

The dynamic range is incredible. The specs suggest it can be as high as 100dB. This doesn't surprise me. I suspect that Sony is using some sort of equivalent to HDR (High Dynamic Range) processing here, where they take audio at two different levels and then crossfade between them. Whatever they do here, it works. Just to give you an idea how big a dynamic range 100dB is: the absolute maximum dynamic range of a CD is 96dB, and you never, ever get that in practise.

This is a device that you become instantly addicted to. In fact now that I've been using it, it's hard to imagine life without one. It's just so versatile.

In a very short space of time, I've used it to record podcasts, capture audio "atmospheres" outdoors (birdsong, rippling water etc) and record a brass band. All at the highest quality, and in a device you can fit in a (big) pocket. And the only additional equipment needed was a tripod.

No, it doesn't have some of the features that would actually turn it into a different type of device, but, considered as a digital recording stereo microphone, it's hard to think how Sony could improve it.