The effect of reverb in real spaces 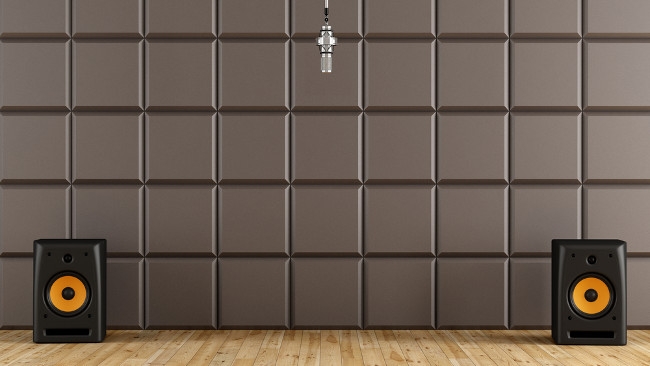 Concluding our series on reverb, we tackle the behaviour of sound and reverb reflections in actual, physical spaces.

Jumping once again into our discussion of reverb, let's start with another useful graphic. The figure below shows how sound is reflected in a room.

The direct sound is the sound that comes out of the keyboard and goes directly into the microphone without reflecting off any surfaces. The black lines represent the reflections. They are going and coming from all angles and the microphone records not only the direct sound, but all the reflections, as well. Of course, I have only drawn a few reflection examples, but you can appreciate what happens when you have countless reflections coming from all angles at different times.

Sound travels at approximately 1130 feet per second, which equates to about a foot per millisecond (ms). Using the example of the room reflections, it is easy to see that some sound waves will travel further than others, some will travel shorter distances and others will bounce around the room. Because the speed of sound is constant, it then follows that the sound waves will all arrive at the listening or recording position at different times. The bigger the space, the longer it takes for the sound to reflect and arrive at the listener/recording position. This time factor denotes the size of the space. Add to that the dissipation time (the time it takes for the sound and reflections to lose energy) and you have further information about the size and characteristics of the space.

A Roomful of Lessons 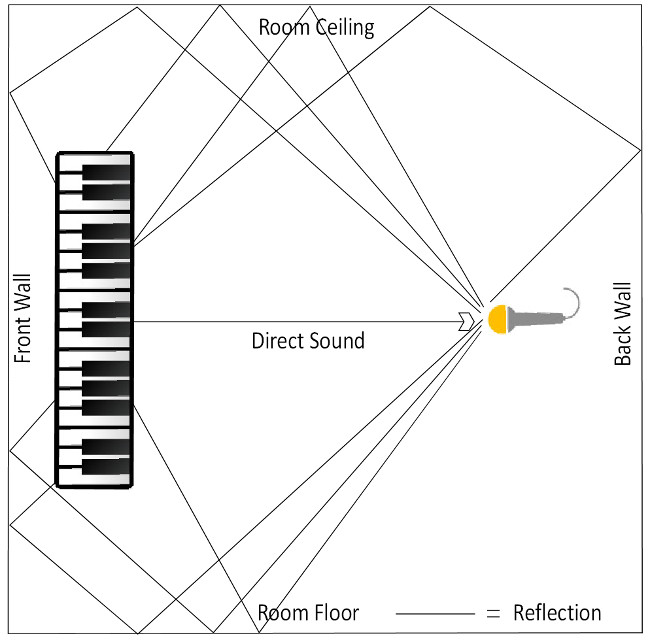 Working from the image above, we can now ascertain a few bits of important information.

The direct sound is the 'dry' sound that comes directly from the sound source without any colouration whatsoever. The reflections are referred to as 'wet'. In fact, this word is applied to any effect that is separate from the dry signal/sound source. This term denotes how much of an effect we want to apply to the dry sound. I am sure you have come across this on many effects VSTs. The dry/wet knob/fader (also called 'mix') is used to mix the dry signal with the wet (effect) signal. In the image, the microphone is picking up both the dry signal and the reflections (wet signals) and the combination of the two is referred to as the 'mix'. By using the wet/mix control, we can have further control over space and density.

Reflections from different angles arrive at different times and this can further determine the characteristics of the space occupied. It is normal for higher frequencies to dissipate quicker that lower frequencies in a given space and this piece of information can go a long way in not only determining the shape and reflective surfaces of the space, but also when we want to sculpt the reverb for coloured use. It is not uncommon to use a high pass filter post reverb to remove unwanted lower frequencies and vice versa. In fact, most of today's VSTs have some form of EQ/filtering built within the VST. When dealing with low frequency sounds, it can sometimes be a nightmare taming the reverb, as reverb can sound like mush and it is here where a combination of dry/wet and filtering processes can be a real help. If reverb is applied incorrectly to low frequency sounds, then definition is compromised. But this doesn't mean that high frequency sounds don't suffer, either. When using reverb on high frequency sounds, the actual reverb effect can sound considerably more pronounced and it is here where, apart from using the usual parameter controls, filtering can be your best friend. Generally, I tend to try to limit reverb use on low end sounds like basses or kicks and, if I have to use reverb, then I will almost always filter the lower frequencies out. And when dealing with high frequency sounds, the HF roll-off is my 'go to' parameter.

The shape of the space is critical when determining the colour and character of the reverb being applied. In large spaces, the echoes can be further controlled so as to provide a sense of direction and shape. In smaller spaces, this is less pronounced, but equally important. When you shout in an irregular large space, you will often hear some of the reflections as distinct separate sounds emanating from different directions. This is down to the angles and time taken for the reflections to arrive. Caves and mountains are good examples of delayed sound emanating from different directions. This example may seem a little 'out there', but it is critical for a producer or sound designer to understand direction and space. When dealing with sound effects for film, this becomes even more important. However, as an example, it serves us well to understand distance and position. A number of VSTs nowadays exhibit a multitude of presets that have different shape characteristics with the added advantage of allowing the user to reshape any space both in terms of angles and size.

The position of the microphone is crucial when recording a sound. The image shows the microphone in a central and equidistant position. This means, if the room is shaped symmetrically, as in our example, all the reflected sounds will arrive equally at the same destination at the pre-determined times and angles. This means there is no bias to either side and the source sound is perceived to be dead centre. If the microphone is moved a little to either side, then the times and angles of the reflections will also change. This will then denote a change in position. You may be wondering why this is important when dealing with reverb. Well, it allows us to understand where a reflective surface is and how we can utilise that to express our sound. It also serves as a great way to 'move' the perceived space of a sound simply by panning the reflections.

From Room to DAW

It is important to understand how an effect such as reverb is used in a DAW (digital audio workstation) also known as ITB (in the box), basically in software. The usual practice, utilised from the old analogue console days, is to use an auxiliary send and return to feed varying amounts of the dry signal to the reverb effect and then output together, both dry and wet. Nowadays, and with the use of software, this method is still utilised and critical, as varying amounts of many sound sources can be fed to the same reverb effect, which allows for less CPU usage and the ability to use the same reverb and its characteristics on a multitude of sounds. But more and more people use a reverb effect as an insert on the channel bus much like a compressor. The difference here, apart from the multi-sound sources feeding into one central reverb, is that the channel now passes directly through the reverb and the wet/dry mix has to be used to control the dry and wet amounts on the same channel via the same unit. This can be constrictive, but does have its uses.