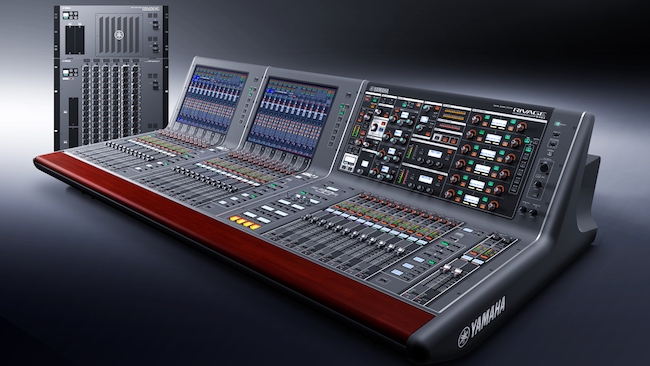 It was the turn of Las Vegas this year to play host to the 1000 exhibitors and some 40,000+ attendees for InfoComm 2016, the largest Pro AV event in North America. Paul Watson provides a run down of some of the new products that raised an eyebrow or two.

It was a five-year InfoComm anniversary for Alcons Audio USA, and the leading audio innovator had a strong presence in and around the show. In addition to a booth on the floor, the manufacturer hosted a 'Pro-Ribbon Experience' in a demo room, which allowed users to get acquainted with the capabilities of Alcons' pro-ribbon sound systems for a variety of applications, from cinema to stadium.

Making its official US debut was Alcons' LR18 3-way, compact mid-size pro-ribbon line-array – on-site at the show, and off-site at a VIP event. According to Alcons, this box delivers reference HiFi sound quality, with a huge output; and it's fully-loaded with Alcons' purpose-built RBN702rs 7-inch pro-ribbon driver, for a linear response [to beyond 20kHz], and very low distortion.

VUE Audiotechnik also had a few interesting new loudspeaker offerings, expanding its reach into a broader range of markets, including large scale touring, with the al-12 large format line array system, and the architectural installation market with the e-Class nano loudspeaker products.

Meanwhile, on the DiGiCO booth, the whole range of SD Series consoles was on show, from the flagship SD7, to the rack-mountable SD11, and 'pocket rocket' S21, and the major announcement involved DiGiCo's Stealth Core 2 software, which delivers a significant upgrade to the SD Series' Stealth Digital Processing. It takes the range to a new level in terms of both processing channels and functionality, the manufacturer says: updated from the ground up, this will essentially future-proof SD series consoles. The new consoles will ship in the summer, and paid upgrades for existing consoles will be available at the same time.

Wireless experts, Lectrosonics, introduced (and demoed) its new wireless designer software, 1.2.9. The package allows for the management of a wireless mic system, and it works like this: first, you run a spectrum scan – which, unsurprisingly, in a busy Las Vegas audio show, brings up a whole number of wireless carriers. Once you see what's going on, and where your channels are, there are lots of conflicts, so the system basically selects new frequencies for those channels to go, deploys the system, and sends that information to the wireless receivers. Just sync that with the transmitters, and your system is up and ready to go. Very impressive.

QSC was busy introducing a new bridging solution – an extension to its Q-SYS platform, which brings a camera resource into a touch screen controller or I/O USB bridge anywhere on the network, and packages audio against professional video. In a nutshell, it solves the problem of USB video distribution hassles, and it's an all-round solution for the emerging soft codec market.

Yamaha showed its RIVAGE PM10 system: a control surface, DSP, and mixer, with RPIO boxes, where most of the input and output channels reside. Users can mix 144 channels at the same time; there are 72 mixes, 36 matrixes, and a total of 108 outputs. Every input channel has a 4-band parametric EQ, every output has an 8-band EQ, and there are also 24 VCAs. The surface is laid out as three bays – left, right, centre – and you can choose to have them combined or working independently for multiple users. There are 12 user define keys, a huge 1000 scenes available to store information, and multiple USB ports, one of which is specifically labelled for recording two-track to USB. You can choose your format too – e.g. 96kHz, 48kHz, etc.

Staying on consoles, Avid had some news about its flagship Venue S6L live sound system. Modular in design, it boasts a control surface, stage rack, and engine – and it's all connected via Ethernet AVB. The Avid team showed a demo of I/O sharing, so multiple consoles can now be networked over AVB, sharing I/O and stage boxes, and the S6L system controls the gain management seamlessly, whether it's in master or slave configuration. Avid also announced its new Dante option card – the DMT 192 – which provides Dante functionality for S6L. Users can install multiple cards, which really opens up the networking capabilities. Finally, the company previewed the S6L's ability to record and playback 128 tracks of Pro Tools over AVB – currently, maximum is only 64, so it's another big step up.

And finally, Martin Audio showed its CDD Live system - a coaxial speaker, with a pretty unique asymmetrical horn that essentially solves beaming problems in the high end. It results in a broad and even response and coverage pattern. CDD Live is a range of powered loudspeakers for portable live applications: 8-inch, 12-inch, and 15-inch models (the 12 and 15 are bi-amped); and two subs: a 1 x 18, and dual 18 sub. It is also Dante netrworked, plus it works seamlessly with the manufacturer's flagship MLA system.