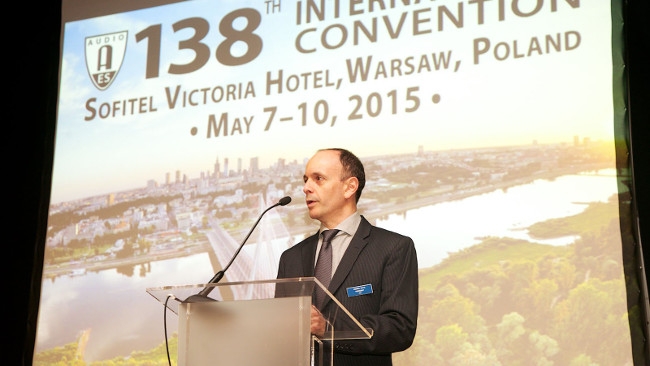 ES President Andres Mayo addresses the audience at the opening ceremonies of the 138th AES International Convention in Warsaw.

As the professional audio industry prepares to gather in Paris, the vibes are positive. Jim Evans reports.

The annual AES European convention has enjoyed mixed fortunes over the last two decades. At one stage, the steady decline in both the number of exhibitors and the number of attendees prompted suggestions that the downward spiral might be terminal. But now, on the eve of the 140th International Convention, taking place at the Palais des Congrès in Paris, France, from June 4 through 7, 2016, the event seems to be making strong progress in the recovery ward and regaining its position in the top division of international professional audio gatherings.

It was last year in Warsaw, Poland, where the AES' wheel of fortune turned significantly.

"The Warsaw convention exceeded our goals in many areas and I'm extremely grateful to everyone who came and made it happen," stated Bob Moses, AES Executive Director. "Attendance was higher than we dared hope for, considering it was our first international event in Poland, and we were following a very successful show in a thriving city last year."
Moses continued, "The exhibition was the largest we've had in Europe in years and the response from businesses was overwhelmingly positive. It seems that we are really finding our groove in Europe."

And so to Paris. The convention will kick off, as is customary, with the opening ceremonies, which will feature remarks from AES President John Krivit, Executive Director Bob Moses, and AES Paris Convention Chair Michael Williams, as well as AES Special Awards presentations by Awards Committee Chair Sean Olive. Additionally, this year's keynote speaker, Alex U. Case, President Elect of the AES, will set the tone for the Convention with a presentation entitled 'Intuition, Rebellion, Courage, and Chance – Historic Moments of Creative Signal Processing That Resonate to This Day'. Day one Special Events also include the presentation 'Podcasting – Telling Your Story with Sound', presented by award-winning engineer Jim Anderson, and conclude with this year's highly-anticipated Richard C. Heyser Memorial Lecture by distinguished researcher Rozenn Nicol, who will be presenting on 'The 3D Audio Revolution from Labs to Mass Market'.

New for this Convention, the Special Events programme will also host a series of twelve 'Audio Projections' listening experiences, offering a set of on-site listening environments purpose-built to showcase the latest surround, multichannel, 3D audio and other immersive audio formats from a variety of experts in the field.

Paris also sees the debut of Professional Sound Expo (PSE). Sponsored by Avid and Genelec, the focus will be on revealing further insights on fundamental topics ranging from microphones and acoustic treatments, to measurement and audio quality control. Several presentations will focus on fundamentals of frequency, phase and crosstalk issues, along with issues and solutions in sessions including 'A High Quality Crosstalk Cancellation Loudspeaker', 'Active Velocity Acoustic Absorption for Low Frequencies' and 'The Importance of Controlling Phase and Damping Monitors'.  A series of 'Acoustic Room Treatment' sessions will also explore specific situations and tools for successfully outfitting a room for maximum listening efficiency.

Another popular series of presentations at recent AES conventions are the 'Mic to Monitor' sessions, sponsored by Prism Sound, which aim to answer questions such as what makes great gear 'great', what it takes to become a successful audio engineer and how professionals tackle different aspects of their productions to create hit records. Further presentations each day, sponsored by AEA, invite attendees to immerse themselves in an AES ribbon microphone demo and to view featured AEA Sessions series videos.

Additional specialized sessions throughout the PSE will take a look at important technical topics, including 'Measurement Microphones', 'Measurement Uncertainty in Audio Testing' and 'Microphone Basics'. The series will also feature a session on using 'Pro Tools in the Cloud' and will conclude with a presentation titled 'Digital Microphones — AES42 and All That' which will shed light on the 15-year history and applications of AES42 digital microphones in the industry.