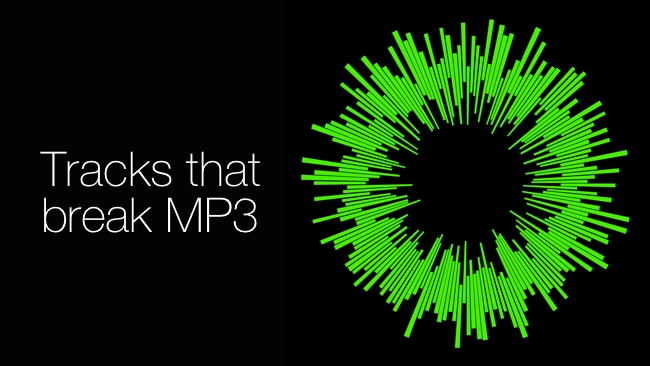 Some tracks are just too complicated to be compressed with MP3, and it's not just the wilder ends of the prog spectrum. It can all start off quite innocuous, even with something like the Bangles' 'Eternal Flame'.

Music compression is amazing. Even MP3 files at 128 Kbit/s sound remarkably clean when you consider what’s been done to them. Perceptual compression - that’s what most lossy music compression is based on - is incredibly effective, especially at high bitrates. Nobody that can tell the difference would prefer to listen to low bitrate MP3s, but if that’s all you’ve got, you can probably live with it. On the other hand, in my household, CDs are having something of a revival, as I realise how much better they sound through good speakers than Spotify, for example - and I love Spotify.

Music data compression is there for one thing: to let you hear music through a pipe that would otherwise not be fast enough. Or it’s to make your music files take up less space. These two factors are just different sides of the same coin.

If your pipe - let’s say your broadband connection - has an absolute bandwidth limit, then you have to make sure that whatever you’re listening to fits into that space. The same thing applies when you make a compressed file and specify a fixed bitrate. Mostly this works very well: the compressor degrades the quality but it does so acceptably as long as this is understood by the listener. But sometimes this goes wrong. There are some tracks that always seem to break compression.

Why is this? It’s all down to complexity. One of the first things that happens to audio in the compression process is that it’s analysed into all its component frequencies. Essentially, instead of seeing the audio as a graph of amplitude versus time, you’d see it instead as a graph of frequency versus amplitude (and this itself would vary over time). So, to illustrate this, imagine you’ve got someone playing a single note on a flute. It would look pretty much like a sine wave on an oscilloscope, but if you were to look at this as a frequency analysis, you’d see a single vertical line where the position would represent the frequency and the hight would represent the amplitude.

With a fuller sound like a rock band, you’d see a hugely more complicated set of frequencies, all moving with time. And sometimes, there are too many frequencies. This only happens rarely but when it does, it’s very noticeable.

One well known track that often breaks compression is Eternal Flame by the Bangles. It starts off quietly, but later in the track, it builds in complexity. There are several closely-miced female voices, with a lot of high frequencies. And then a loud snare drum starts. This, combined with the voices and a lashings of reverb means that there isn’t any “space" left at all. It’s a very clever and extremely effective mix aesthetically, but with lower bitrate compression - say 128 Kbit/s MP3 - there just isn’t enough capacity. Something has to give.

And when it does. the sound changes dramatically. It sounds gritty, in a bad way, and you can hear sounds that are not harmonically related to the music. More than anything, it just sounds uncomfortable.

I have to mention digital radio here. In the UK, we use a system that is essentially the predecessor of MP3. Some people call it MP2. It's about a third less efficient than MP3, and it is often caught out by complicated passages of music if the channel you're listening to doesn't use a high enough bitrate. While the system is technically very good (it was designed with cars in mind and it works well in a moving vehicle), at the time when it was being developed, audio codec technology was not as advanced as it is now. When the system launched, all the details were essentailly "frozen" into the broadcast standard. Back then (it was around thirteen years ago) radios were not designed to have their codecs upgraded with a firmware update. So we're stuck with a system that actually gives lower quality than FM a lot of the time.

Dial up the bitrate and the problem is less severe and eventually becomes unnoticeable. Ultimately the answer is to not compress at all, and we’re moving towards being able to do that. Uncompressed CD quality audio only needs 1.4 Mbit/s and broadband speeds are moving towards 100 Mbit/s in cities.

Do you know any tracks that break compression? I’d love to hear.