Why we still love MIDI 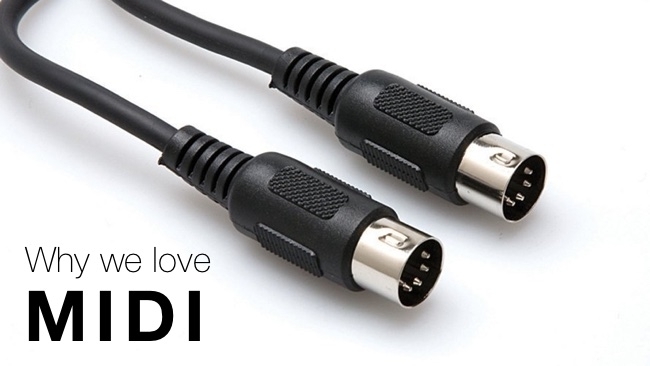 Why we love MIDI

We still love MIDI, and there are some very good reasons for that

You know what it’s like when you experience something for the first time and have a moment of “now I get it!”? It was like that for me with MIDI.

Of course I’d read about it. I got all the music technology magazines and some other trade-only publications that I had access to in the course of my job. But I didn’t get to try it properly until a few years after it became a standard part of the specification on virtually any synth. That’t probably because to use Midi you needed two fairly expensive synthesisers, and I only had one.

When I got my Korg M1 synthesiser in 1989, I tried connecting it to my friend’s Yamaha DX7 - the very first synth to sport MIDI as standard. I wasn’t expecting it to work, because I was already too richly exposed to the hazards of connecting digital devices together. It was hard enough to make a printer work, with parallel cables the size of a hosepipe, and a different driver for every piece of software, never mind an external disk drive or (heaven forbid) a SCSI-connected scanner.

So with practically no idea what I was doing, and no real hope that anything useful would happen, I played some notes on the DX7, and out of the M1 came M1 sounds. Now, the DX7 wasn’t endowed with the full MIDI specification, but for me, this little experiment started a grand MIDI adventure that culminated with me running a studio with seven keyboards and two rack expanders (Korg M1Rs), all under the control of an 80286-powered PC, and a multi-output MIDI PC interface that included timecode.

There's more to it than you think

Before I got to this stage, I’d been fascinated to find that that MIDI included channel numbers, the ability to change patches in the middle of a song (so that if you had run out of actual tracks, you could instruct the MIDI sequencer to change the synth’s patch number for as little as a single note, and then change back again) and that it all happened in (almost) real time. The only problem was when there were too many crunchy chords on too many channels, which could cause timing problems, but using an interface with more discrete MIDI outputs solved this. MIDI is a serial interface, and it is very slow by today's standards.

One extraordinary example of forethought is that the MIDI specification includes optical isolation. It means that you’ll never get earth loops (i.e. buzzing) and it does make it especially safe in live situations.

The idea of “just working” has only just come back to us with Class Compliant USB devices, where there’s no need to install drivers. But MIDI has to be the ultimate Plug And Play protocol. It’s safe, reliable and even OK to use in live setups.

It’s an incredible example of good design incorporating forethought. If only we could get it that right all of the time.

Now all I have to do is figure out how to plug a MIDI cable into my wafer-thin, port-deficient Macbook.