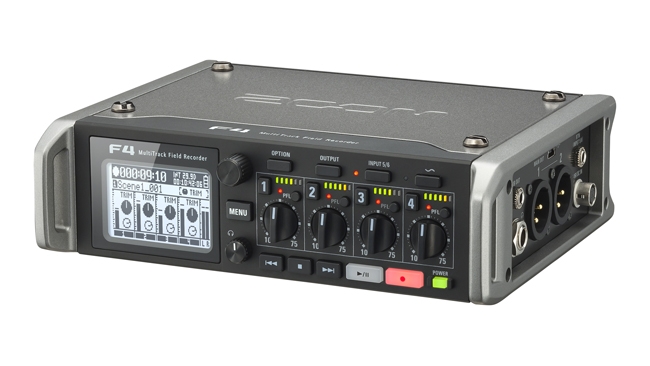 Zoom, the company that has become synonimous with low cost yet capable portable audio recorders for film and video use, has announced its latest recorder, which likely ticks a lot of boxes for a certain level of film professional and production.

Zoom's handheld audio recorders, particularly the H4 and H6  series, have been among the most common devices in their field almost since release. There have been pretenders to the crown of economically-minded audio acquisition from Tascam and the now-venerable Fostex FR-2 and FR-2LE. The FR-2 even offered a timecode upgrade, but none were ever quite as visible as Zoom's seminal efforts.

Popularity aside, there were limits to what could be done with an H4. Recording timecode on a spare audio channel is possible, but there wasn't any really easy way to put timecode on an H4. Even if you wanted to deal with the user interface, designed for pocket-sized, handheld recording, it didn't slip into the sound recordist's highly-fashionable shoulder bag in a way that kept the controls visible. Zoom didn't have a solution for the slightly-higher-end recordist who needed timecode and some room for some radio mic receivers.

Now, Zoom has just such a solution. In a familiar form factor, the new F4 enjoys what the company describes as a "solid metal build." Shoulder strap loops are part of what look to be to be cast endplates, although the device is clearly designed to go into an audio bag as part of a more elaborate outfit. The top and bottom are free of connectors and controls. Although the SDXC cards are only accessible from behind, which is not the most obvious approach, controls and displays are on the front with the connectors on the sides.

So far, so good. The good news continues continues with XLR output connectors where competing units provide only RCA for monitoring, as well as a proper latching four pin Hirose (or, at the very least, Hirose-style) power input. Squinting at the released images suggests it's tolerant of power up to 16V. Not only is Hirose a de-facto standard, it's also something that people with lesser hardware have begged and pleaded for, even given the high cost of these connectors, every time a domestic-style coaxial DC power connector parts company at an inconvenient moment. 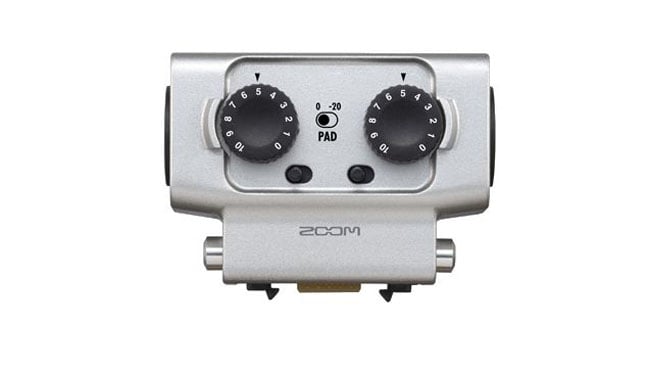 Adapters, such as the EXH-6, provide further XLR connectivity.

Comment has already emerged that the transreflective (black on grey) LCD display is somehow primitive. While the dot-matrix image is redolent of a late-90s cellphone, there's an extremely powerful motivation for it: transreflective displays remain completely viewable in any kind of sunlight. Light powerful enough to completely erase the little LED bargraph channel meters will not affect the LCD.

The right tool for the job?

So far, Zoom seems to be taking very much the right attitude. The F4 is natively eight track, although there's only four XLRs (as part of XLR/TRS combos) and four mic preamps. The other four channels are split between a 3.5mm minijack input and one of Zoom's proprietary combined microphone connector mounts on the back. This can, with a reasonably affordable accessory, become a further pair of combined XLR/TRS connectors, albeit with rotary level controls not alongside those on the front panel. The headphone jack is a full-size quarter-inch connector bolted through the case wall. 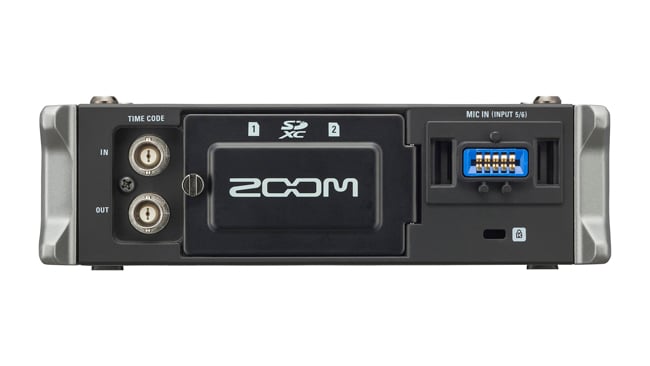 The SD card access is at the rear, which is perhaps not ideal, but this angle also reveals the crucial timecode connectors.

The device is also much more of a mixer than most field recording tools, with sub outputs and, in effect, a return input formed by inputs 5 and 6 on the 3.5mm jack. Perhaps the key features, though, are the timecode input and output connectors, which are BNCs. It's a straightforward feature that's either present or absent and it really needs to be present for a serious filmmakers' audio recorder. The company advises that precision is ensured by the use of a temperature-controlled crystal oscillator with 0.2 parts per million accuracy, equivalent to less than a frame in 24 hours, which is an everyday approach in this sort of device.

With the available surfaces smothered in connectors, there is no space for any AES I/O. While some competing devices offer it, AES isn't very often a big deal for the sort of jobs the F4 seems intended for and this omission won't bother many. The LED backlit buttons will be far less sunlight-readable than the LCD, but they don't seem to indicate anything that isn't shown on the LCD anyway. The front-panel level controls look a little closely-spaced, perhaps, but final judgement is best reserved until we have the device in hand.

In all, the Zoom F4 looks well-specified and, at around US$650, a very affordable way into timecoded audio recording that sits in a bag in just the way that's expected in film and TV production.