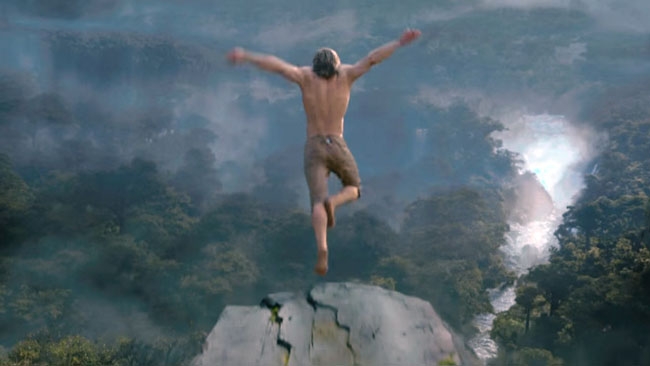 The Legend of Tarzan

Sound designers Glenn Freemantle and Niv Adiri detail the process for creating the rich soundscapes for The Legend of Tarzan.

The jungle is a famously rich, engaging environment of soaring trees, dense foliage and, of course, the sounds of a rich variety of wildlife. David Yates' film The Legend of Tarzan therefore offered a tempting opportunity to sound designers Glenn Freemantle, supervising sound editor, and Niv Adiri, re-recording mixer. There was, however, one principal concern: much of the film had been shot not in the soaring exteriors of Gabon, which were used for helicopter overheads of the jungle. It was instead shot at Leavesden Studios, in Watford, a place not widely renowned for the call of the wild.

Early edits of the film were somewhat sparse in terms of the fidelity of the simulated location. "This one is obviously a big budget ($180 million) with a lot of CGI," begins Freemantle. "Basically, when you start, there isn't a lot in it you can use from a sound perspective, [but] it's the jungle, it's the Congo... everything you see has to be completely constructed from the ground upward." Even beyond that, given the schedule and process of refinement common to CGI, the final appearance of the film is not necessarily established very early. "To begin with you don't really see it very well. It's all blocked in... it's a process of gradually building it up and changing it."

In the long term, this can, perhaps surprisingly, make for a sparser sound mix as the computer-generated material builds in nuance and subtlety. "When the CGI becomes good, the expression on the face, it doesn't need a noise all the time." Either way, for early versions, such as the director's cut shown to the studio, "you start putting a lot of sound in it... the first process is to get a film that runs as a film." Here, Freemantle refers to the effect of sound on pacing: "For editing purposes, it's there to create a rhythm. When it's all bare it feels very slow."

Freemantle and Adiri became involved in November 2014, finishing in June 2016 with breaks partway through to accommodate the director's next film and their own prior commitments, "...and they wanted to do reshoots and a load more CGI and animation."

Adiri describes the creative process as reasonably freeform: "The feel is more important to us than the exact location on the map and the season and day or night. Though of course you do it, Tarzan is not necessarily a real person... the location was specific but also we were trying to make it sound, you know, correct to the film. We're not going to do every little insect."

Freemantle particularly remembers "the elephants... we wanted them to be a bit more spiritual."

Adiri continues, "they were made out of elephants and a different animal. The apes are things that don't exist, so they had to be made of gorillas and monkeys and other elements to make them more edgy, work with the picture, be a bit different."

Given the close integration of the wildlife with the storyline, there was a need for the apes to exhibit specific characterisation. "The two main apes had a personality which had to be different," says Freemantle. "One of them was like a street gang member, he'd be whooping and hollering differently so that's a big variable on the sounds. They all had a slightly different style, a family, but different. It has to have personality and meaning as to why they're doing it." Nonetheless, he continues, "it's not a sci-fi, so it had to sound grounded and like an animal that would live in the jungle – not an alien."

With a need to produce a soundtrack to take advantage of the sophisticated surround capabilities of modern cinema audio, as well as the more prosaic need to leave spectral space in the mix for vocals and music, the creation of the jungle ambience was more complex than simply recording the real thing. Adiri remembers that "we had recordings from the specific locations they wanted to shoot... if you go to a jungle and record you get everything, but we try to separate them. We had recordings we used as a reference."

To satisfy, particularly, the object-based audio of the Dolby Atmos system, Adiri preferred access to "different elements, so you have control and some sort of movement through the scene... especially at the mix stage, you want control over as many elements as you can. You have a layer of wind, wind and trees, then insects and other animals... not part of one big sound."

Freemantle illustrates this consideration with reference to a sequence involving a descent into the jungle. "There's a canopy, then you go through the canopy, down to the floor – you can create that in sound, you have all these zones. You go to a jungle and record a noise, you can't separate the noise."

This process was assisted, says Freemantle, by the process of virtual mixing, which permits complete control of each individual sound at any stage of the process. "You can get into everything right until the end."

Adiri is equally enthusiastic: "Our workflow is all in Pro Tools and we're using it from start to finish. We're mixing it all in the box using their control surfaces.... you can do whatever you want very quickly, you don't have to stop and delay. It makes the process very intuitive."

Even with such impressive technology, restraint, Adiri feels, is key. "The more details you put around [the audience], the more attention will be taken to those areas, and the film is happening on screen... if things are flying around you have licence to fly things around, but if it's a dialogue scene, you have to be careful about how much attention you put on the surround."

Especially with the most advanced techniques, such as Atmos, Freemantle promotes caution. "You don't want to get too carried away with it. It shouldn't be a gimmick... if you use it in the correct way, you can create a dynamic moment. If you use it all the time, you leave no room for that dynamic moment."

Sound design for The Legend of Tarzan took place at Sound 24 at Pinewood with assistance from sound designers Ben Barker, Tom Sayers and Eilam Hoffman, with the final mix at De Lane Lea in London's Soho postproduction district, "but we did take our mixing desk," the Pro Tools S6.

Additional effects editing was performed by Dan Freemantle and Robert Malone, with Ian Tapp serving as additional re-recording mixer and Gillian Dodders editing dialogue. With a history of collaboration on films including Everest, Ex Machina, V for Vendetta, Gravity and others, Adiri and Freemantle are due to work together again on the upcoming Trainspotting 2. "So that should be different," finishes Adiri, with considerable understatement.