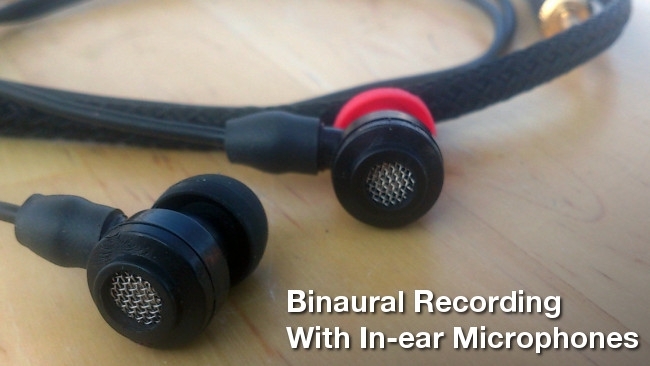 Burgeoning consumer technologies will serve to increase the importance of binaural recording, so here's a quick introduction on the subject. By Roland Denning.

Conventional stereo sound aims to create a sound stage in front of you, as if you are sitting in the stalls at a concert. Surround sound systems add speakers behind you.

Binaural recording, also know as 'dummy head' stereo, takes a much simpler approach. Since we only have two ears, complete 3-dimensionality should be achievable with just two sound sources, if they can accurately reproduce the way your ears hear the sound.

Binaural recording does this by placing microphones exactly where your ears would be in a dummy head. The dummy ear canals mimic the way our eardrums receive sound and distinguish where it comes from.  The result is an uncannily realistic sense of audio space.

Binaural is not new; in fact, it goes back to the end of the 19th century, but every few years it seems to have a revival. Although it is a simple and effective process, one of the drawbacks is that it only works over headphones, but with the burgeoning interest in VR, perhaps its time has come again.

Recording binaural sound is relatively simple; you just need a replica head with microphones placed within the replica ears. A far simpler solution is to use your own head, with small microphones placed in your ears that look reassuringly like earbuds for an mp3 player. This set-up has an added advantage of looking very discrete; no one will know you are recording sound rather than listening to it. The only drawback is that you can't monitor the sound as you record as your ears are functioning as microphone holders.

Mics and use cases

There are a variety of in-ear binaural microphones available ranging from the very cheap to the moderately expensive. Some of the best value binaural products I've found are made by a one-man company in Norway, Luhd-Microphones, that makes a set for £79. They are neatly made, low-noise and sound surprisingly good.

What do you do with them? Obviously, they need to be heard only over headphones, so they are ideal for immersive environments. The theatre artists David Rosenberg and Glen Neath have made some stunning performances, Fiction and Ring, with the whole audience equipped with wireless headsets, sitting in a completely dark auditorium – the sense of stereo space is extraordinary. In fact, they are worth considering for any audio project which is destined to be heard over headphones rather than speakers. There are limitations, of course; you are limited to using the binaural pair of mics and mixing any additional mics in would destroy the effect.

Here are a couple of minutes of tests I made with the Luhd binaural mics: a London market, the making of a cup of tea and a haircut (headphones essential!).