How to make interviews sound good 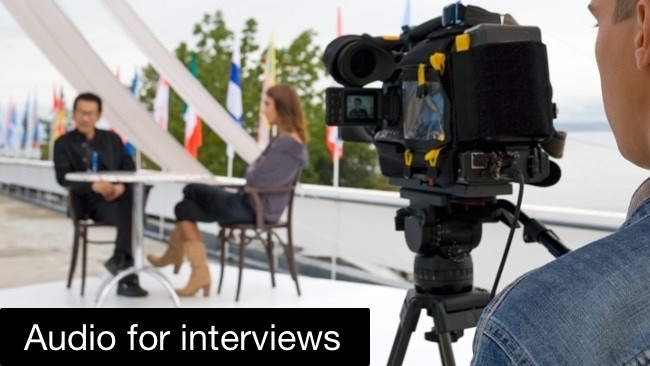 Roland Denning on how to make your interviewees sing - or at least sound better than they could.

This is an extract from an article looking at the whole practical business of lighting and shooting interviews. Click here to read the full piece on our RedShark News sister site.

Forget the camera mic. It's not going to do the job. Ever. The simplest way to record sound for an interview is a personal microphone (also known as a lapel, lavalier, tie or clip mic). They don't have to be radio mics and there is less to go wrong with a cable than a wireless connection. But make sure it is a professional quality mic. There are some very cheap and nasty mics out there. General rule-of-thumb: if a personal mic costs much under £150, it's unlikely to be up to the job.

You can usually hide a personal mic without it being muffled or suffering clothing rustle. But, if in any doubt, it's better to go for a discreet visible mic than poor sound. The Rode PinMic, which pins through clothing into an inconspicuous head on the outside of the garment, is a great way to have an unobtrusive mic and avoid any rustle.

Always have a back-up. Mics go down or pick up mysterious electrical interference. And if your mic has its own power supply, don't forget to carry a spare battery.

The alternative (and better in some ways, but less convenient) is to boom the interview. A short gun mic on a boom stand a couple of feet away from the subject's face might give you a nicer sound. It will also avoid clothing noise and any thumps if the subject hits his or her chest.

Usually, you don't need stereo or the interviewer's questions, so use your two audio channels to record two mono tracks with one few db's lower as a safety track in case the subject shouts, laughs or screams.

Don't forget the buzz track (room tone). This just means recording the ambient sound of the room (using the same mic and settings) without anyone talking. The primary use of the buzz track is to fill the gaps and pauses if you cut up the dialogue; you probably only need a few seconds of it, but try to record as much as you can before people start sneezing or giggling.